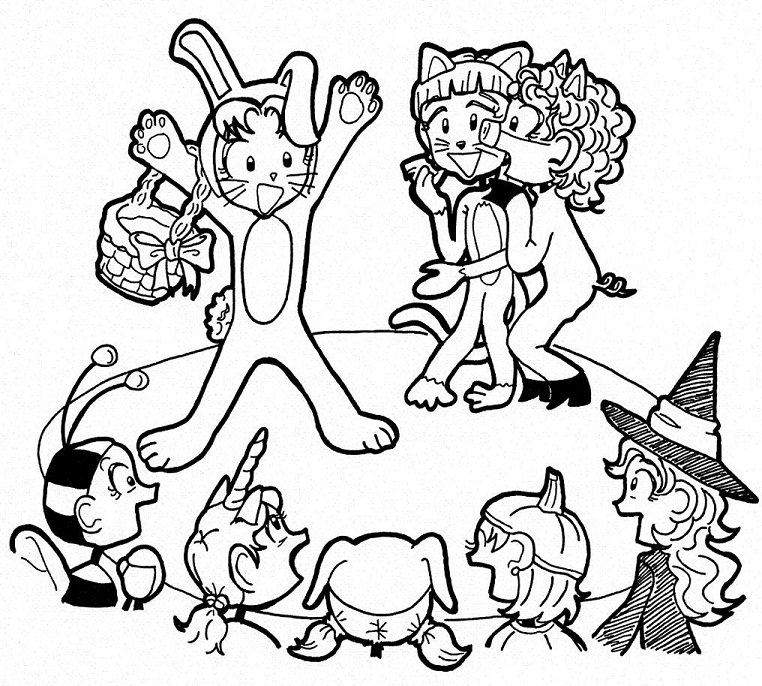 Earlier this week, I was FREAKING OUT about my Halloween costume. I was trying to think of something clever, cute, AND cheap because I spent all my allowance on…hmmm…where did that money go??

Seriously, the second I have money to spend, I want to buy EVERYTHING! Last week, I bought a package of band-aids that look like slices of bacon because they were on sale at a novelty shop. I know—crazy!!

I know many of you already know what you’re going to be for Halloween (because I read all your awesome comments) AND because Halloween is super close now.

But if you don’t know what you’re going to be and you’re panicking because there’s not a lot of time left, you should take my quiz to find out!

a. Spend the whole night jumping around to Thriller and other Halloween songs at some kind of dance.

b. Go trick-or-treating. If you don’t collect enough candy to last until next Halloween, you’ll consider the night an EPIC FAIL!

c. Watch scary movies with a few close friends—but only after you decorate your living room so it looks like the scariest haunted house EVER!

d. Go to a small party with your BFFs. It will probably involve pumpkin carving, bobbing for apples, and all those other AWESOME Halloween themed activities.

2. You hope that all your friends:

a. Wear something homemade, because that’s probably what you’re going to do. You don’t want to stick out like a big sore bloody thumb! (Why bloody? Because it’s Halloween…duh!)

b. Wear something really scary! Halloween is about looking freaky, NOT looking cute. (If you see someone dressed as a Barbie doll, you may be tempted to cut all their hair off, like you did with your Barbies as a kid….or was that just me!?)

c. Wear good shoes! You have your whole neighborhood mapped out, so if anyone decides to go as Lady Gaga, they better ditch the CRAZY stilt heels!

d. Get really into it! It’s seriously LAME when someone wears a ski mask for Halloween and pretends they’re a burglar. They might as well dress like they always do and say they’re themselves…from the day before.

3. When your friends see your Halloween costume, you hope they:

a. Go, “Squeeeeee!!” And then say they love your costume. You want it to be something fun and maybe even a little silly. You definitely don’t see Halloween as a “Who’s the hottest?” contest. (Like some people I know…ahem, MacKenzie!!)

b. Start snapping pictures like they’re the paparazzi! You want everyone to be so impressed that YOU become a trending topic on Twitter.

c. Ask you how you made it. For you, Halloween is like the coolest arts and crafts project ever.

d. Pee a little! OK, not really. That would kind of stink for them (and you…). You just want them to bow down to your awesomeness and crown you the queen of freaky and frightening.

4. Your perfect Halloween costume has to be something you can:

a. Terrorize people in! If people don’t have nightmares about you for weeks, you did a really bad job at the whole costume thing.

b. Move around in! No mermaid tails or mummy wrapping for you—you’re going to be bouncing all over the place with a MAD sugar high!

c. Flirt in! You’ve been dreaming about a slow dance with your crush, so it wouldn’t work to dress up as a zombie. You don’t want him to see you and think about death!

d. Have fun with! You wouldn’t be caught dead buying one of those package costumes at Walgreens. It’s like buying a prom dress at the 99 cents store…it doesn’t make any sense!

5. Your BFFs would describe you as:

a. The center of attention! If you’re hanging out in a group and no body’s talking to you, you’d probably get up and do a cart wheel or start singing.  You WON’T be ignored!!

b. A blast to hang out with. You might even be the class clown. You’re the friend who always thinks of fun things to do, because you’re cool like that!

c. Emo. When you saw Twilight for the first time, you felt like you were coming home. Moody vampires feel like your people!

d. Artsy. They could seriously teach art in your bedroom—it’s FULL of glue, beads, and supplies to make stuff.

Add your points for each question, and then scroll down to see which one you fall into. 🙂

A Princess, Fairy, or Butterfly

Let’s face it: You want people to be totally jealous of your cute Halloween look. Hey, I’m not dissing you or anything! Who doesn’t want to look cute?? Since you might want to flirt with your crush a little, I suggest going with something girly, like a princess, fairy, or butterfly costume. This way, you can go nuts with the glitter makeup and lipstick, and your parents can’t say a DANG thing about it. It’s Halloween!

A Cupcake or Twister

You need a costume you can move in, and you wouldn’t mind if people thought your costume was kind of funny. A cupcake could be super cute, with colorful sprinkles and stuff (and no, I’m not talking about the Katy Perry bikini top kind!!!) You could make this yourself with felt (Google it!) A Twister costume is super comfy…and easy. If you already own Twister, you could just turn it into a cute little dress!

A Vampire, Zombie, or Witch

Admit it: You’ve been thinking of fake-biting people’s necks for weeks now, haven’t you? You may already have a ton of fake blood ready for your costume, because you aren’t fooling around. You want to scare the CRAP out of people! I know I’m being Captain Obvious here, but just in case you haven’t already figured it out, you should be a vampire, zombie, or witch. Happy scaring!

A Clown or a Bag of Jelly Beans

If you want to get super creative with a homemade costume, a clown could be an awesome idea because you can go NUTS with a glue gun and colorful crafty stuff. If you want to be a bag of jelly beans, you’d wear a see-through trash bag, cinched at the top and bottom, and fill it with colorful balloons. This costume works best if you’re planning to pretty much stay in one place all night (or else it could really hurt!) But hey, if you’re just sitting around watching movies, you’d look totally unique!

Do you already know what you’re going to be? Tell me!! Inquiring minds want to know!! 🙂