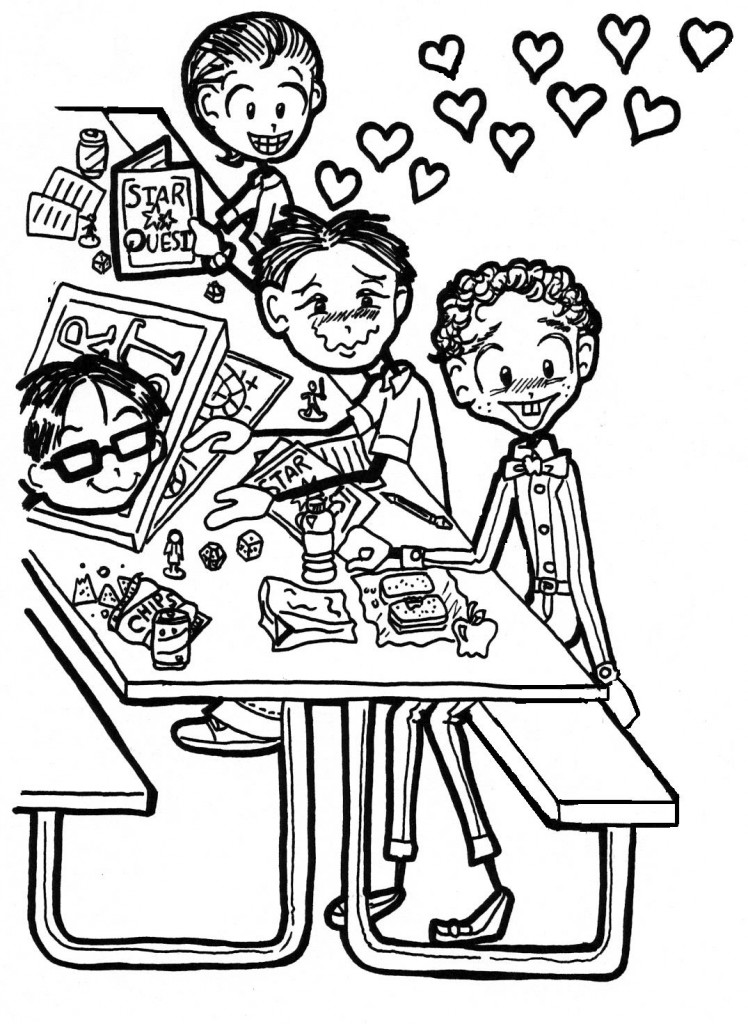 OMG!!!! I’m super psyched today because I learned a BIG secret in school! And even though I pinky swore that I wouldn’t tell a single soul, I figure thousands of people in the blogosphere don’t really count since I’m not really TELLING it…I’m writing it!

The secret is….drum roll please….Paul Preston has a BIG FAT crush on Zoey!!

Who is Paul Preston, and how do I know this super secret information, you ask? Well, he’s a totally cute boy who works in the library—and it’s a long story that involves Pixie stix, milk, and a hand dryer.

OK, you probably want details. Coming right up! I was sitting in the cafeteria eating a crusty tuna sandwich my mom made me.

Generally speaking, I’d rather eat paint chips than bring a bagged lunch, but I’m pretty sure the mystery meat they serve in school is a combination of squirrel, PLAY-DOH, and egg shells. Mmmmm rubbery, crunchy grossness…

Anywho, I wasn’t really feeling my lunch, so I decided to dig into my secret pixie stix stash. Shhhh! No one knows about it. I keep it in the secret pocket in my backpack for lame lunch emergencies just like these.

When I opened the secret zipper, ALL of my Pixie stix came shooting out, like colorful sugar grenades. Guess that pocket wasn’t made to hold 40 pieces of candy awesomeness! So I got up and bent over to pick them up.

Right then, Paul Preston walked right into me, spilling milk off his tray right onto my butt. Seriously….on my butt!!

I was TOTALLY annoyed, until I saw what else fell off his tray: a piece of paper that had Zoey’s name doodled all over it!

So I was all like, “OMG Paul, you are TOTALLY in puppy lovey-love with Zoey!!” Except I said that in my head so no one heard it but me.

What I REALLY said was, “Ummm, I think this is yours?”

Then he turned BRIGHT RED, like I just walked in on him wearing Batman pajamas or something else super embarrassing.

So I tried to make him feel better by saying, “Zoey is such a great girl, huh? She’s a super awesome friend, and any boy would be lucky to have her!”

I’m not sure why I said “have her,” like Zoey’s a hamburger or something else on a menu. But I think he knew what I meant, because he just totally spilled his guts!

He went, “She really is the best! The other day I dropped a huge pile of books, and I thought I’d never be able to get them all back on the shelves before the end of the period. And then Zoey said, ‘Whether you think you can, or you can’t, you are usually right. That’s Henry Ford.’ She’s so smart!”

I don’t know where she gets this stuff!

Then Paul said, “I really want to tell Zoey I like her, but I’m not ready to tell her yet, so pinky swear you won’t tell!”

So of course I did, but I kind of REALLY want to tell her. I mean, Paul’s totally cute. And if Brandon told her something about me, I’m pretty sure I’d want to know!

I wish I got him to tell more about why he likes her. It’s SO fun hearing people gush about your BFFs! But I couldn’t because I had to run to dry my butt under the bathroom hand dryer. Even though my pants smelled like chunky sour milk for the rest of the day, it was SOOO worth it!