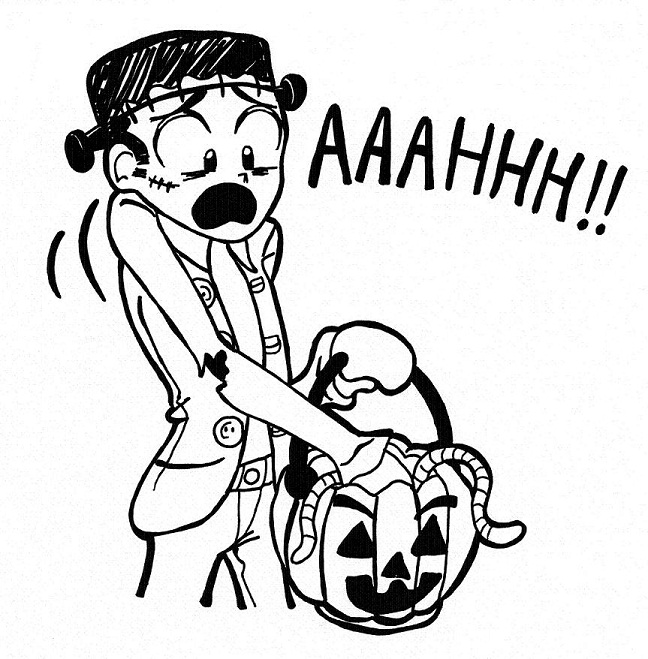 If I had a job, yesterday I would have called in almost dead—that’s how sick I felt! I don’t usually overdo it with candy on Halloween because I’m not 5 and I prefer to make it through the night without hurling…especially when it involves slow dancing with Brandon!!!

But I TOTALLY went overboard with the candy on Halloween.

Seriously, if I ever have another night like that I may need to join Chocoholics Anonymous, because I ate my weight in sugar!!

It all started so innocently. I was getting ready for the Halloween dance, putting some glitter makeup on my eyes, when I saw it: the bowl!!!

You know EXACTLY what I mean by “the bowl.” It’s a bowl so large I could curl up and take a nap in it. It’s like a cereal bowl for giants, and it only comes out on Halloween.

Mom usually hides the Halloween candy she plans to give to trick or treaters until the very last minute. If she puts it out, she might as well liquefy it all in a blender and then pour it down Brianna’s throat. Really, that’s how fast it would be gone!

She doesn’t usually worry about ME, though, and this year that was a BIG, BIG mistake!!

The first thing I saw was a mini Snickers. I LOVE Snickers!! I swear I heard it call to me, “Nikkkiiii!!! You knoooowww yooouuuu waaant meeeee.”

Yes, my Halloween candy sounds haunting and creepy, kind of like the Ghost of Christmas past.

I tried to fight it at first. Really, I thought, “Nu uh! I don’t want you! I want to get ready and go to the dance!”

Yeah, you probably know how that turned out. It was only a matter of minutes before I put a MASSIVE dent in the mountain of chocolate Mom bought for the neighborhood kids.

I knew she’d be TOTALLY annoyed. So I emptied the bowl, put a bunch of crunched up newspaper in the bottom, and then put the remaining candy on top.

Clearly she’d EVENTUALLY find out—but not ‘til I was at the Halloween dance, and maybe then she’d think it was Brianna or Dad.

OK, so the odds of her blaming Dad were pretty slim, especially since he’s like a label detective, always rambling about the “hidden sugars” in fruit juices and snacks. (And he almost convinced Mom to give out small raisin packages because “kids don’t know it, but what they REALLY want is more fiber.”)

And I know, it was kind of mean let Brianna take the fall…which is why I told Mom what I did, and then asked her to hide any leftovers at the end of the night so I wouldn’t eat any more.

That would have been an AWESOME plan, if I didn’t come home from the dance fiending for candy, like some kind of MENTAL PATIENT. I was like a shark with a taste for blood. Seriously, I almost considered eating the candy necklace right off MacKenzie’s neck!!

Since the MASSIVE bowl fits in about two places in our house, Mom did a really bad job hiding it. She put it on top of the fridge with a pillow case over it, which is about as RIDICULOUS as her wearing a pair of glasses with a nose and mustache attached and trying to convince me she’s really Dad.

So OF COURSE I found it. I’m pretty sure I fell asleep eating candy, because I woke up with a Jolly Rancher stuck in my hair.

I know what you’re thinking…Who cares about candy? What about the dance?? What did I wear? Did I dance with Brandon?? Just wanted to build a little suspense!  🙂 🙂

I ABSOLUTELY danced with Brandon! We danced to like five different songs, and Chloe and Zoey got some really cute pictures of us. It was ALL KINDS OF AWESOME and the good news is I didn’t hurl on him! But that’s a different story.