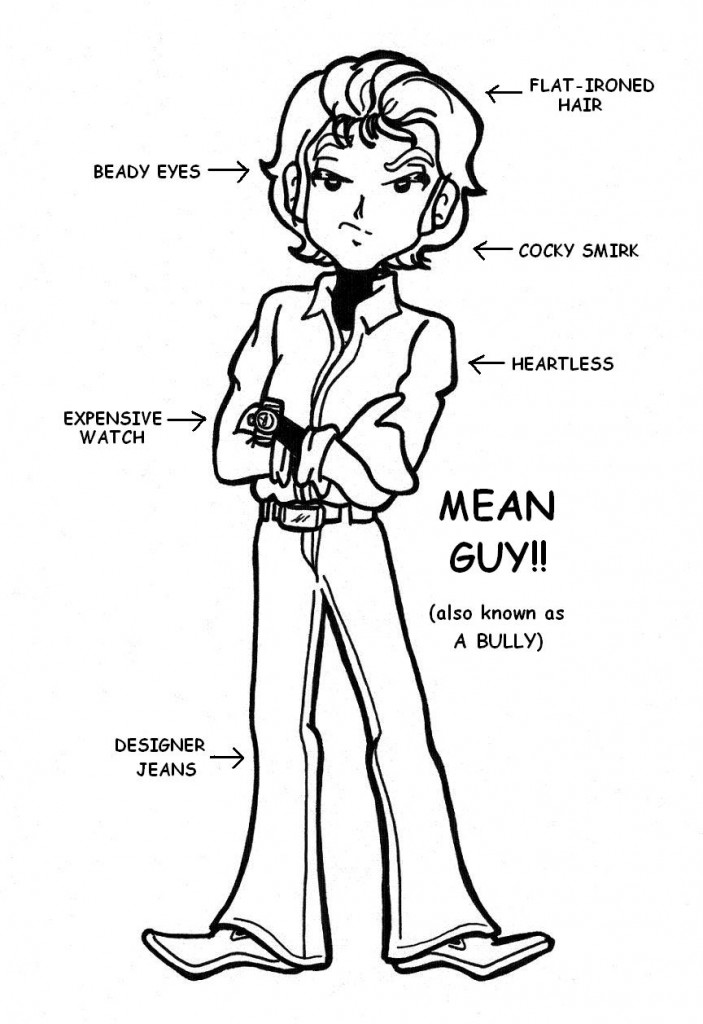 Arrrrggggh!! That’s me being TOTALLY annoyed with this super mean boy from school.

Really, it’s not just MacKenzie who treats other people like ants for her to crush with her LAME designer shoes. There are also CCP boys who think they own the world…and I have news for them: THEY DON’T!

Today after school, Zoey was eating this chocolate Santa. (And by “Zoey was eating” I mean we were sharing…those things are so dang good!!)

Patrick Clark, AKA MacKenzie’s male clone, ran by, knocked it out of her hand, and then yelled, “Fat pig!”

Um, blind much?! That’s what I wanted to yell at him, because Zoey is SO not fat! And if he was talking to me, neither am I!

This one time she was having trouble getting into her locker (maybe her huge fake nails made her mess up her combination…). Anywho, Patrick was walking by and he was all like, “What are you, brain dead from too much hairspray?! It’s a locker, not ROCKET SCIENCE!”

We all know MacKenzie is FAR from my favorite person…and she’s definitely dished out her fair share of nasty insults. But I don’t like seeing ANYONE made fun of. It’s SO not right!!!

I was going to be all like, “there, there” to make her feel better and stuff. But she whipped around wicked fast, stared me down, and screamed, “What are you looking at DORK?”

Note to self: Do NOT look MacKenzie directly in the eyes unless you want to BURN your retinas!!

This isn’t about MacKenzie though. It’s about Patrick. Pat. Pat who called Zoey Fat. Pat who walks all over people, like they’re a door mat. Pat the little rat!!! (Rhyming makes me feel better…)

This past week alone, I’ve seen him make four people cry. He told this girl Carmen that she’s a loser because she’s always picked last in gym. The poor girl. She has asthma…it’s not her fault!

This girl Eliza who wears glasses…he actually tripped her in lunch, and then yelled “Watch where you’re going four-eyes!” (Which is like the oldest insult known to man…SO not original!)

He stole Brian Cranston’s retainer when he took it out at lunch and threw it in a toilet. (I can’t believe he actually touched that thing! GROSS!)

And then there’s what he did to Emma. Oh man, I was so embarrassed for her!! He stole her diary from her back pack and read out loud at his lunch table. He was all like, “Dear Diary, I have a super secret crush on Jason. I hope he’s my first kiss some day!”

I would be FURIOUS if someone did that to me!!! (Even though my diaries are clearly super entertaining :))

I have decided that I will NOT stand for this!! Seeing a bully and doing nothing is just as bad as being a bully yourself. The next time he says something mean to Chloe, Zoey, or even MacKenzie, I’m going to walk right up to him, look him in his empty eyes, and say…

Would you say something to him if you were me? And what would you say??