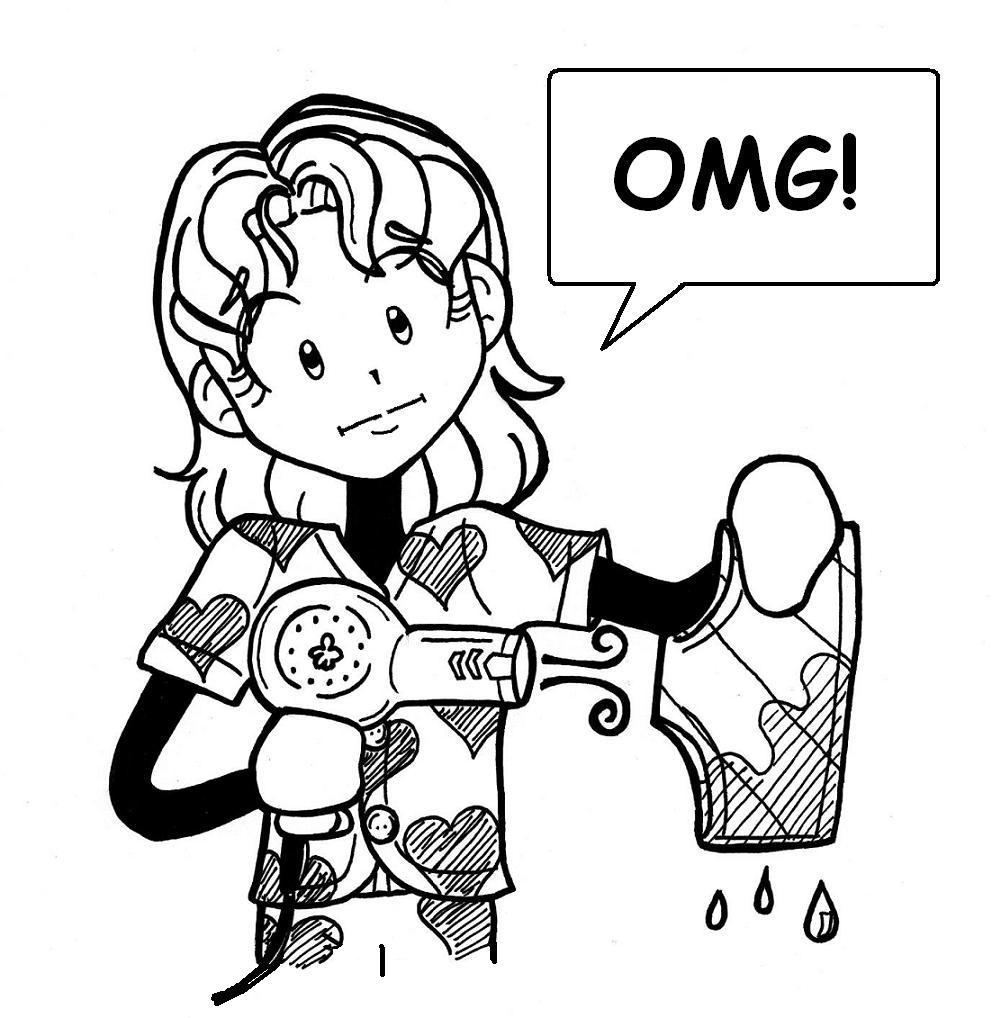 Greetings friends!! As you may remember, I had a makeover sleepover on Friday, and let me tell you, it was AWESOME!!

I totally knew it would be, because Zoey and Chloe are pretty much the coolest people on the face of the Earth. In case you’re wondering, they did EXACTLY what I thought they would.

I got a Jersey Shore makeover!! OMG I looked just like Snookie. They gave me huge fake eyelashes and they even put this orange makeup all over my face.

I couldn’t wait to take that stuff off! It was like a liquid straitjacket SUFFOCATING my face pores.

Between you and me, I’m kind of glad my dad’s all weird about me wearing makeup, because I felt so fake and freaky wearing all that thick goop. I bet that’s what it feels like to be MacKenzie. Maybe that’s why she’s so DERANGED…all that makeup has seeped into her BRAIN!

Anywho, since we had a super fun time, I started thinking that I’m going to have A LOT more sleepovers.

Next time we probably won’t do the makeover thing. (Partly because my parents got mad when Chloe tripped on those massive platform shoes I told you about and broke this ceramic coffee mug my mom made for me, which reads, “I’m not crazy. My mom had me tested.” She has a weird sense of humor!)

So next time we’ll just have a regular sleepover. But it will STILL be totally AWESOME! Why? Because I know exactly what you need to do to have the best sleepover ever. Here are my top ideas:

1. Pick the biggest room in the house, and move all the furniture to the side of the room. This way, you have plenty of space for sleeping bags, bowls of junk food, and the occasional mid-sleepover cartwheel. (What, doesn’t everyone do random cartwheels in the middle of the night?)

2. About that junk food: Get a TON of it! Seriously, don’t be all cheap with your allowance. I’m not saying you have to go nuts baking or anything, but if you’re going to host a sleepover, you definitely don’t want to be putting out trays of fruit and raisins. NO ONE wants raisins at 2 in the morning!!

3. Have some activities planned in advance. This one time in third grade, I went to a sleepover at my friend’s house, and we pretty much just watched TV in the living room with her grandmother while her five cats crawled all over us. NOT FUN!

4. About those activities: TRUTH OR DARE!! It’s a sleepover classic, and there’s a good reason for that: It’s awesome!! Don’t be afraid to ask the super hard questions if someone picks “Truth.” They know how the game works. If they ask for it, dig for the good stuff!!

5. Get pizza delivered! Pizza’s awesome, and this will give you all a chance to vote on who thinks the pizza delivery guy is cute. (Unless he’s like the 76 year old man who showed up on Friday. I didn’t see that coming! Shouldn’t he be sitting somewhere with tea and Canasta on Friday nights??)

6. Don’t put ANYONE’S underwear in the freezer. I don’t know who came up with this one, but it’s downright cruel!! A girl did this to me once, and then her cute older brother walked in on me in the bathroom while I was trying to blow dry it. OMG! SO embarrassing!! Thank goodness I had my PJs on the whole time.

7. Along the same lines, DON’T put someone’s hand in a bowl of water while she’s sleeping. This WILL make that girl pee herself…and don’t ask me how I know!

8. Take lots of pictures and videos, but make sure you ASK before you put them anywhere online! No one wants to log onto Facebook to find a video of themselves wearing a T-shirt and doing the Beyonce Single Ladies dance!

And that’s it! Do you have any ideas to have an AWESOME sleepover??