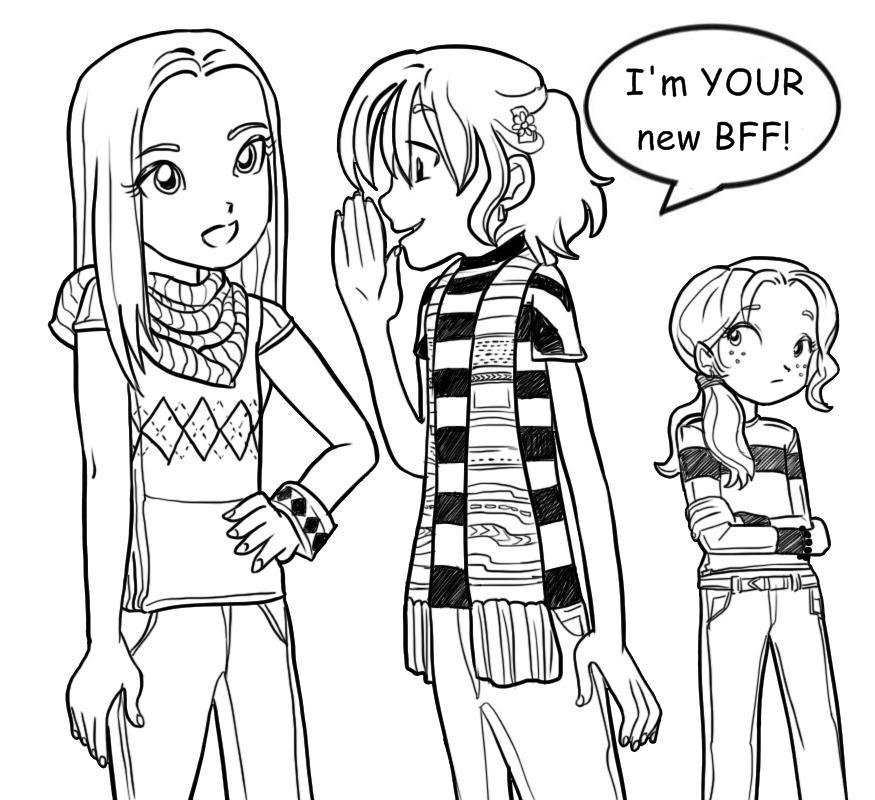 This question comes from Kylie. She writes:

What do I do if my best friend only hangs out with the one person I never cared for? She also tells me to shut up when I’m talking. How do I tell her that I feel that she doesn’t like me anymore? What do I do?

Hi Kylie! I’m SO sorry you’re dealing with this friend drama! I know that kind of thing can be super stressful!

The first thing that really jumped out at me is what you wrote about your friend telling you to shut up. Has she always done that, or is that a new thing?

I mean, maybe she thinks she’s just joking around, but it’s SO not cool to tell a friend to shut up!!

Friends are supposed to listen to what we say and be all nice and supportive. Sometimes it’s okay to be like, “SHUT UP…he did not say that to you!!!”

But there’s a big difference between that and “SHUT UP…it’s my turn to talk!”

That’s the kind of thing MacKenzie does…and she’s NOT my friend!!

Maybe you could sit your friend down and say something like, “I really don’t like it when you tell me to shut up, and I noticed you’ve been doing it a lot lately. Is there something else on your mind you want to tell me?”

This way you don’t just come out and say, “I think you don’t like me anymore!” You tell her it’s not cool to talk to you that way, and give her a chance to say whatever’s on her mind.

Maybe she’s been talking to you like that because she’s mad about something, but has been holding it in. (That doesn’t make it okay or anything, but this gives you guys a chance to talk things out!)

Or maybe she’s been moody about something else that has nothing to do with you, and because you’re so close she’s been taking you for granted and taking it out on you. And maybe when you ask her she’ll feel totally bad and apologize.

You never know until you ask!!

The part about her hanging out with someone you don’t like that much…that one’s a little trickier.

Why don’t you like her? Is she totally mean to you? Or is that you just don’t know her that well? That makes a big difference, because if you don’t like her but don’t really have a reason, maybe you just need to get to know her a little better.

Maybe your friend sees a different side of her that you’d see too if you gave her a chance.

If she’s super mean to you and your best friend knows it, then you could ask her about that too when you bring up the whole “shut up” thing.

You could say something like, “I know we’ve talked about how mean she is to me so it surprised me that you’re spending so much time with her.”

So that’s my advice! Just tell her how you feel about what’s she’s been saying and doing, and give her a chance to explain herself.

What do you guys think? Do you have any advice for Kylie??