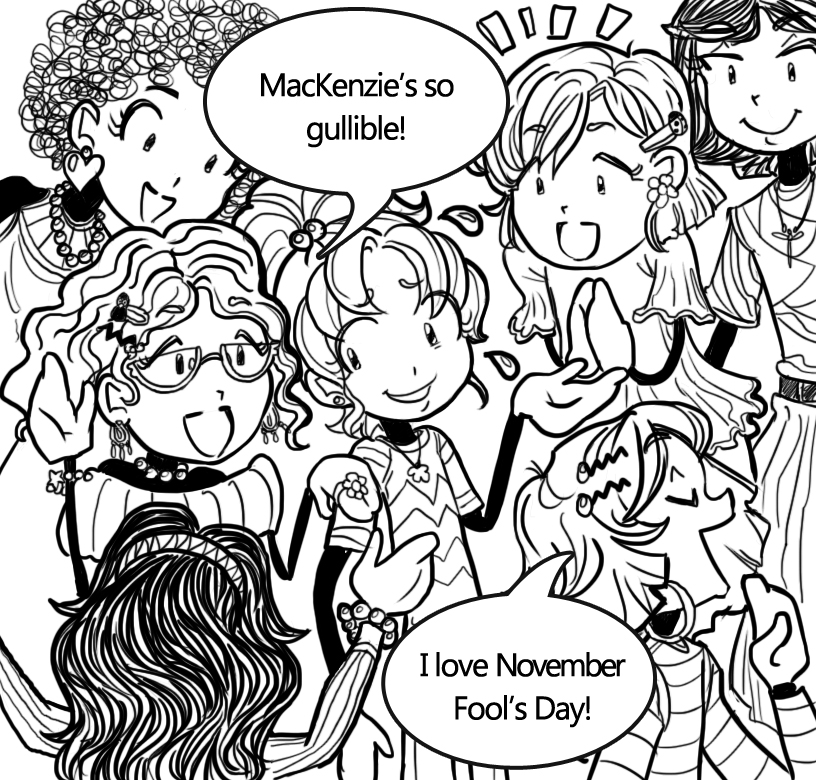 Sorry for leaving you hanging with my last blog post!! In case you didn’t read that one, it was all about this HORRIBLE rumor MacKenzie started about me last Friday.

Well, I guess I kind of started it…but I was just being sarcastic, and then she told EVERYONE I lied to get Brandon to come over my house on Halloween.

I didn’t know what to do since the WHOLE school thought it was true. Luckily, Brandon hadn’t heard the rumor, but I figured he would soon enough!!

On Monday afternoon I came up with a BRILLIANT plan…November Fools’ Day!

What’s that you say? “Fools’ Day” is an April thing? Why NOT add a second one in the later part of the year?

Well you can’t! But you CAN have two fools’ days…I know because I just started the second one!

In lunchtime, Jessica and these other CCPs were all staring at me and whispering about what a lying LOSER I was. I seriously wanted to crawl into a hole like a squirmy, dorky worm and DIE!

But I had to be strong…THIS was my chance to set the record straight!

I walked right over to them and said, “Wow people are STILL talking about the November Fools’ Day joke I played on MacKenzie, with that silly story about lying to Brandon. I guess I did a good one!”

Then Jessica screeched, “What are you even talking about DORK!?”

So I said, “Um, November Fools’ Day? It’s the day after Halloween. Don’t tell me you don’t know about it!”

Then Jessica went, “OF COURSE I know about it! Wow you got MacKenzie good. She TOTALLY believed you told Brandon that big lie. Way to go dork!”

THEN she walked over to another table and started telling EVERYONE it was all a big November Fools’ Day joke!

This was even better than I thought! Jessica TOTALLY complimented me, and then she started UNSPREADING the rumor in a way that made ME look good and MACKENZIE look gullible.

After that, I figured I was TOTALLY in the clear. Then after school, Brandon saw me and asked, “Can I talk to you for a second?”

I felt like there was a HUGE grip on my neck!! I opened my mouth to talk but all that came out was a cough-like squeak sound, like I was a huge choking mouse!

Then I cleared my throat and said, “Sure.” It was just one little word, but it was totally hard to get out!

He asked me, “So, I heard about your November Fools’ Day joke.”

I SERIOUSLY thought he was going to scream at me for saying something so sick and vile!

Then he said, “That was pretty funny, about my grandmother dressing up like a zombie from the Walking Dead. That would have been hysterical!”

For a second I was totally confused…then I remembered, rumors have a way of changing as people spread them, kind of like that game telephone.

By the time it got to him, I guess it was completely different.

I was SO relieved!

I didn’t want to straight out lie to him and say that I had said that. Even though I was just being sarcastic, I was in this huge mess because I had lied to MacKenzie!

So I just said, “You know what was REALLY funny? When my little old lady neighbor FLIRTED with you and gave you ALL her candy!”

Then HE said, “That was such a fun night, hanging out with you.”

I’m so glad that no matter what LAME tricks MacKenzie tries to pull, Brandon and I are SUCH awesome friends!