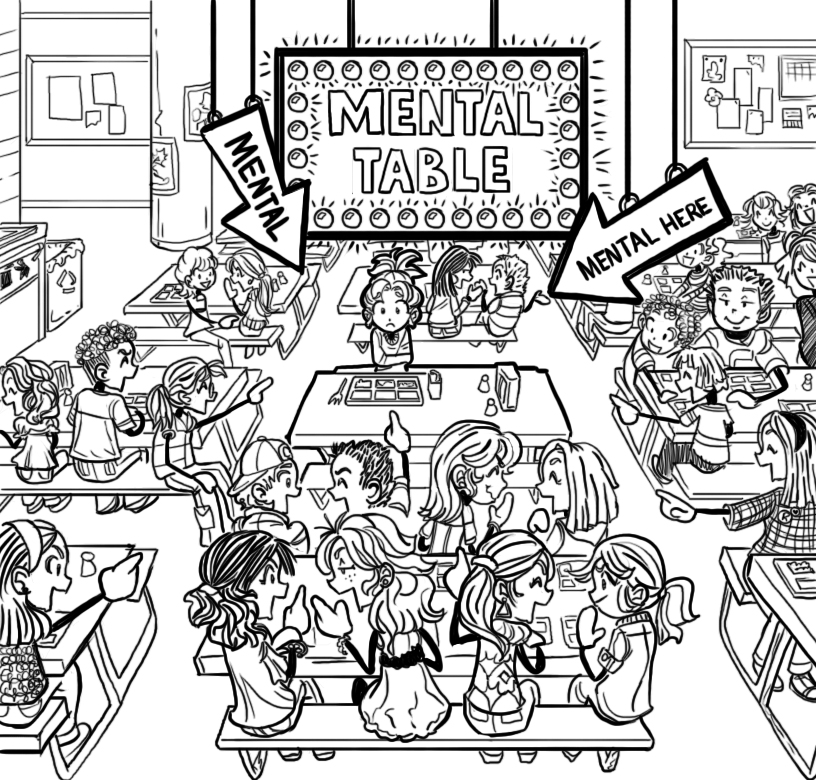 I was SO excited about missing the Halloween dance since it gave me a chance to hang out with Brandon ALL by ourselves!

I mean, we were only at my house for like ten minutes before we joined Chloe, Zoey, and Brianna tricking or treating. But even THAT was a lot of fun!

We made out like BANDITS!! I got a WHOLE pillowcase full of candy, but Brandon CLEANED UP.

I swear my little old lady neighbor Mrs. Perkins has a crush on him or something.

She was all like, “My, aren’t you a handsome young man! A growing boy like you needs lots of energy!” Then she dumped her WHOLE bowl of candy in his bag.

Still, we had SUCH an awesome night…then MacKenzie tried to ruin the memory!

On Thursday she was asking EVERYONE if they knew why Brandon didn’t show up at the dance. I guess she hadn’t noticed Chloe, Zoey and I weren’t there either.

Makes sense…she treats us like DIRT and no one really pays attention when there’s a little dirt missing!!

No one knew where he was, and OF COURSE she didn’t ask us. She just assumed we wouldn’t know since we’re lowly DORKS.

That might be true, but Brandon thinks we’re WAY cooler than her! That’s why he spent the night with US!!

Somehow she found out on Friday, and she was SO annoyed!!

When I was at my locker in the morning, she slammed it shut before I could get my books out. She TOTALLY could have SMASHED my fingers!!

Then she dug her crazy dagger nails into my arm and growled, “So, you were with Brandon last night, huh? I bet you made up some LAME lie to get him to come to your house!”

Then I said, “You got me! I told him his grandmother had a car accident on my street and he had to come over ASAP to hear her last words. I’m SUCH a horrible, desperate liar!!”

I was SO obviously being sarcastic. And I’m pretty sure she knew that…but then she told EVERYONE!!

By lunchtime, the WHOLE school thought I had told Brandon his grandmother was dying in my arms.

Everyone kept staring at me, like I was this pathetic, pathological MESS!

I wanted to scream, “I’M NOT THE ONE WITH MENTAL PROBLEMS!!! MACKENZIE’S THE ONE WHO NEEDS SERIOUS HELP!!”

Even though the rumor was spreading like CRAZY, somehow it didn’t get back to Brandon yet.

And I didn’t want to tell him since it was technically started by ME! I mean, what could I say?

“MacKenzie asked if I made up some lie to hang out with you, and I told her that your grandmother was bleeding on my front lawn. Now everyone thinks it’s true. My bad!”

I didn’t end up saying anything on Friday because my brain was like one big rotten cavity from all the candy I ate. I was in such a sugar coma, I couldn’t think straight!!!

But on Monday, when people were STILL giving me funny looks, I knew I had to do SOMETHING, and quick!

I decided to schedule a SUPER URGENT lunchtime meeting in the janitor’s closet with Chloe and Zoey.

I DESPERATELY needed their advice!!

Chloe said, “You should just tell Brandon the truth. It will bring you even closer together, and one day, when you’re living happily ever after, you’ll totally laugh about this!!”

I love that girl but she is SUCH a cheesy romantic!!

Zoey wasn’t much help either. She suggested I volunteer to do the morning announcements then tell EVERYONE on the loud speaker that it was all a misunderstanding.

I could see it playing out…

“Um, so, there’s an assembly in the auditorium during fourth period and I was, um, just kidding about lying to Brandon about his grandmother’s vicious death. I just have a sick sense of humor. Have a great day everyone!”

Dangit! I have to run. (I’m in the computer lab at school!) I’ll tell you the rest next time I write!!