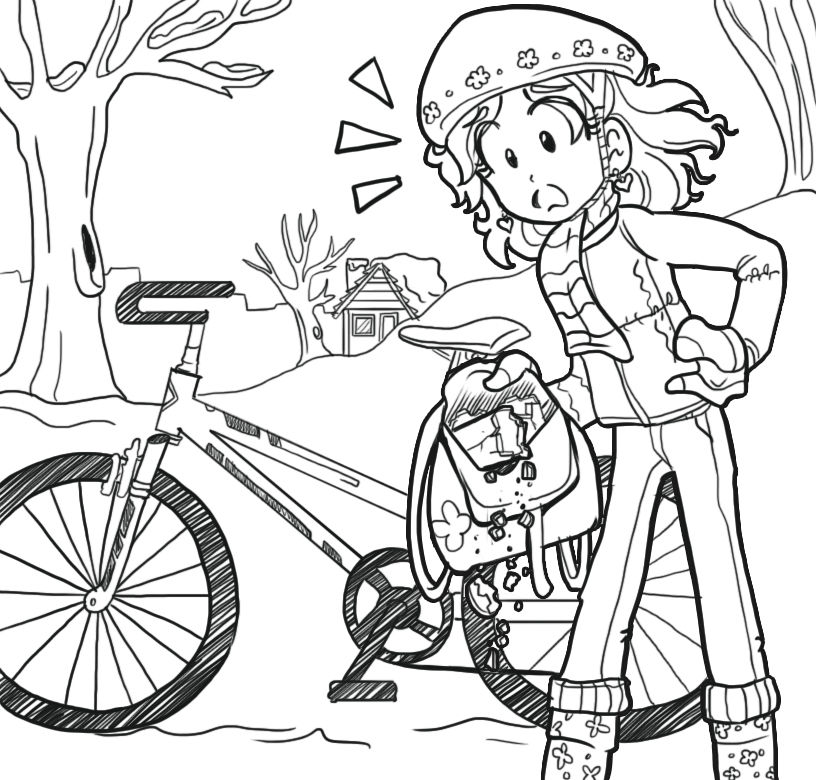 Remember how I told you that Chloe, Zoey, and I were going to give each other little homemade gifts every day until Christmas?

I was SUPER NERVOUS because I had the FIRST day.

I mean, that’s the toughest day to have, because I didn’t know yet what kind of stuff Chloe and Zoey were going to come up with.

It reminded me of this time I had to give an oral report in English class. I thought it would be a great idea to go first and get it over with.

Then the kid who went RIGHT after me did a rap AND an interpretative dance. No joke!

I SO wished I’d gone last!! I definitely could have thought of something cooler after seeing what everyone else had done!

I wanted to come up with something totally awesome to start the Christmas countdown off with a bang, but I didn’t want to set the bar TOO high. I still had seven more gifts to come up with!!

I decided to do cookies in a jar because the first was on Saturday, so we could all make the cookies together!

What’s “Cookies in a jar” you ask? It’s super easy to make! You just get a jar, and then layer dry cookie ingredients inside so they look nice.

Then you decorate the jar with ribbons and pretty fabric and stuff.

The best part: I knew it wouldn’t cost a dime, since my mom had a bunch of old jars lying around AND she had all the ingredients for chocolate chip cookies!

I was SO excited about the day that I threw the jars into my backpack, ran outside to my bike, and started pedaling like a MAD WOMAN!

I guess I was a little TOO excited, because after just a few minutes I lost my balance and fell off my bike…landing RIGHT on my backpack!

As soon as I hit the ground I heard it: KSHHHH!

It was the sound of breaking glass…A LOT of it!

Luckily, I’d wrapped the jars in my sweatshirt, so I didn’t get cut when I fell or anything…but ALL THREE of the jars were broken!

My backpack was a MESS of sugar, flour, and chocolate chips, and for a minute I SERIOUSLY considered handing it to both of them and saying, “Happy first day of the Christmas Countdown! I brought you cookies in a backpack!”

I was psyched that my diary and Christmas doodles were okay, since they were in the outside pocket, but I didn’t know what to do about the gifts since they were expecting me any minute!

I sat on the ground shivering, THIS CLOSE to crying! No, I wasn’t JUST crying over spilled cookies. The fall REALLY hurt! But okay, the cookies were a big part of it.

I REALLY didn’t want to mess up the whole day.

I decided to just get back on my bike and head to Chloe’s house. I get my best ideas when I’m riding my bike!

Then it hit me: Homemade Christmas wrapping paper!

I had a TON of doodles, and not to brag or anything, but they were all really good!

When I got to Chloe’s house, I thought for a second that I was HALLUCINATING from cookie deprivation, because it smelled like CHOCOLATE HEAVEN near her house.

As soon as she opened the door, I realized why. She’d JUST made a bunch of chocolate chip cookies!

Both Chloe and Zoey LOVED my wrapping paper, AND we got to eat cookies together.

It was an AWESOME start to the Christmas countdown!