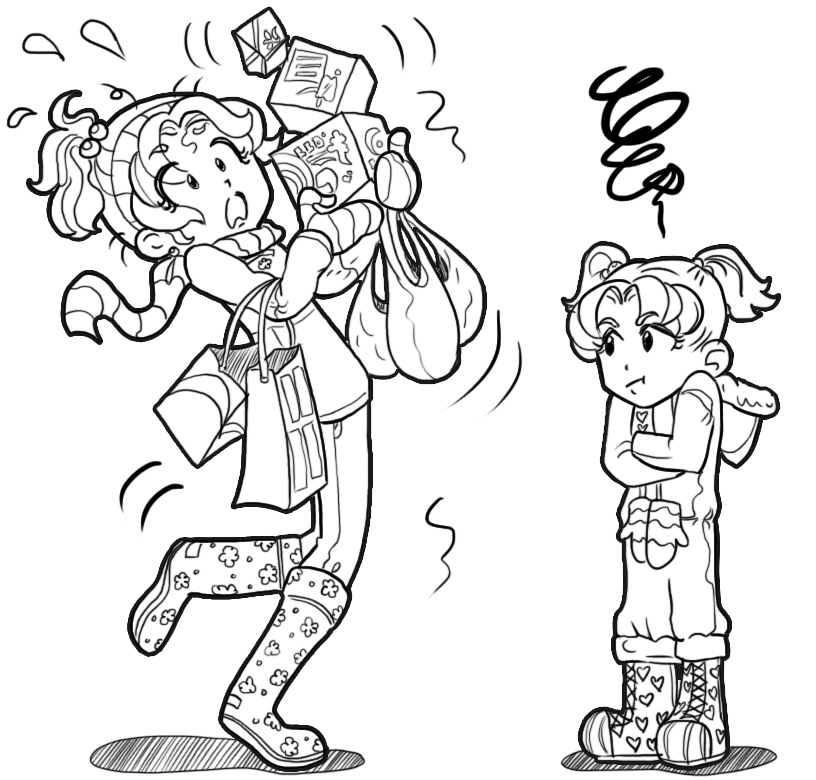 I’ve been having SO much fun making little gifts for Chloe and Zoey that I COMPLETELY forgot to get Christmas presents for my family!

I was super worried since all the good stuff’s usually gone this close to the holiday.

I thought FOR SURE I’d have to give my mom and dad lame stuff, like Tupperware and a tie.

(Actually, a tie’s not a lame gift, but my dad doesn’t wear them. I may as well just give him a pack of adult diapers…that’s how USELESS that gift would be!)

I decided to go to the mall on Saturday, and I was really hoping my mom would drop me off so I could shop alone…but NOPE!

When I asked her for a ride, she said, “Oh good! You can help Brianna do her shopping!”

I was SO annoyed!! I DEFINITELY didn’t want to take Brianna to the mall, not after the fiasco with Brandon’s birthday present!

My mom gave Brianna $20 to buy Christmas gifts and told me to make sure she didn’t spend ANY of it on candy.

Because that’s exactly how I wanted to spend my day…on sugar patrol!

It was definitely a good idea to keep her away from it though. She’s even more crazy and hyper when she gets sugar in her system…but I REALLY didn’t feel like babysitting!

When we got into the mall, we saw this new pick-and-mix candy store that looked like Willy Wonka’s Chocolate factory.

I turned around to tell her we weren’t going in, and she was already gone!

I found her pointing to a high shelf while a salesperson stood on a little ladder, reaching for a massive chocolate Santa. You can’t turn your back on that girl for a second!

I told her, “Mom said no candy, Brianna! We have shopping to do!”

Then she whined, “You ruined the surprise! I was picking out a gift for you!”

I highly doubt that she thought I’D want a big chocolate Santa for Christmas! She’s SUCH a little liar!

I told her we’d get pizza for lunch if she let me do my shopping in peace, and she was so excited she started jumping up and down screaming, “Yaaaaaay!!!”

After that she totally chilled out. Things were going great for about an hour. I found these super soft slippers for my mom, and a shaving kit for my dad.

Since she kept up her end of the bargain, we took a lunch break and got some pizza.

All I had to do after that was buy something for her, but obviously she couldn’t see it!

So I told her to wait in this one toy store aisle while I found and paid for her gift a few aisles over. I was only gone for five minutes, but when I went to get her she was gone!

I should have waited until we both did ALL our shopping before I got her the pizza!!

I knew EXACTLY where she was!

When I got to the candy store, I saw she had a MASSIVE bag of candy! That thing must have weighed about ten pounds!!

I tried to grab it from her and put it down so we could run out, but this mean looking sales lady said, “You pick it and mix it, you pay for it!”

That was ALL Brianna’s shopping money, and I’d already spent all of mine.

I just knew my mom was going to FLIP OUT when she picked us up and saw I let Brianna spend all her shopping money on one giant bag of candy!!

I knew there was only one way out of this mess: I told Brianna I’d help her make homemade gifts and that we’d give the candy to the homeless guy who sits outside the mall.

If that guy gets 10 cavities, it will totally be our fault!!

I had to spend ALL of Sunday afternoon making stuff with her. Next year I’m buying my gifts SUPER early, on my own so I don’t get stuck shopping with her again!