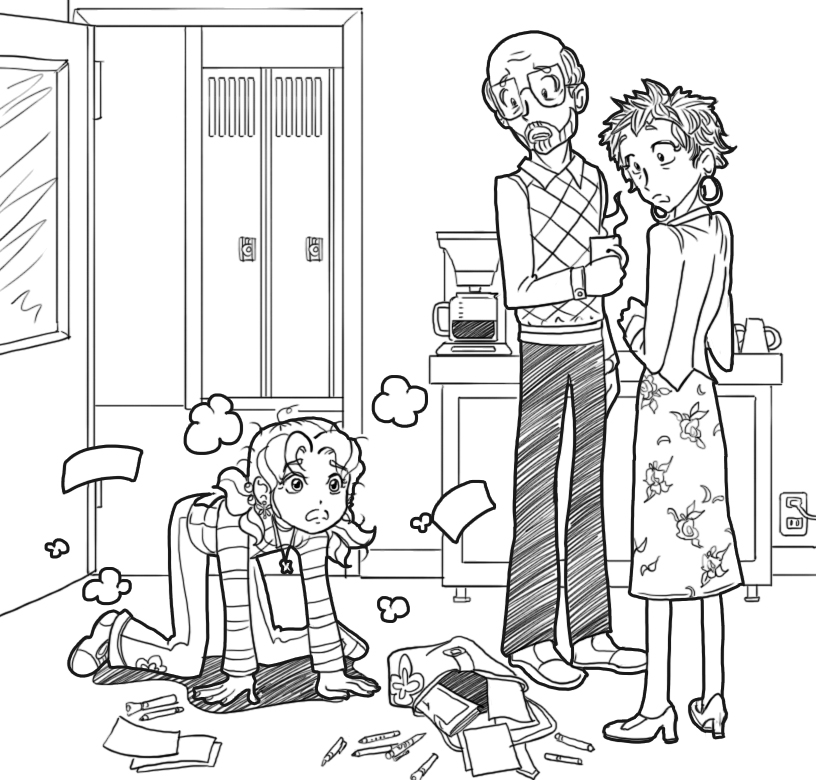 I was planning to write more about the super fun Christmas countdown thingy I’ve been doing with Chloe and Zoey, because it’s been all kinds of awesome!

Seriously, I spent the WHOLE day counting down the hours to write about all the cute things we’ve given each other…but if I don’t tell you about what I heard this afternoon I think I might DIE from excitement overload!!!

But before I go any further, let me just say…

Okay, NOW I’m ready to tell you the story!!

I got dismissed from school today because I had a dentist appointment. I usually HATE the torture chamber that is the dentist’s office, but I’ll take that over fifth period math ANY DAY!

As I was walking past the teachers’ lounge to meet my mom, who was waiting outside to pick me up, I heard someone say my name.

I couldn’t see who was in there talking, but I knew it must have been a couple of teachers. (It’s the TEACHERS’ lounge, after all, not the students’/lunch ladies’/janitors’ lounge!)

At first I got kind of nervous. I imagined all the things they could be talking about, like…

“Nikki Maxwell…yes, THAT’S the girl who defiled MacKenzie Hollister’s home. She should definitely be expelled!”

Or, “Nikki Maxwell…yes, THAT’S the girl who supposedly has a dentist appointment right now. She’s probably just skipping math because she STINKS at it. She should definitely be expelled!”

Or, “Nikki Maxwell…yes, THAT’S the girl who wears cheap department store clothes. We don’t need fashion-challenged DORKS like that at WCD. She should definitely be expelled!”

Okay, so that last one would be highly unlikely unless a bunch of CCPs suddenly possessed their bodies…but hey, I was feeling super paranoid that they were talking about me!!

I couldn’t just leave without knowing what was up, so I leaned on the door and put my ear up against it…but it turned out, it wasn’t fully closed, so I fell in!

OMG I was SO mortified! I mean, they definitely knew I was eavesdropping! But I was also kind of excited, since this gave me chance to see what they do in there.

I always imagined it as this super fancy room with velvet couches, a fireplace, AND its own Starbucks! I pictured the teachers sipping espresso and eating caviar while getting neck massages.

Nope! Nothing like that! It’s basically a little cafeteria, with grimy tables and folding chairs. And I didn’t see ANY caviar…just a couple crusty bologna sandwiches.

(Man, teaching is SO not glamorous!)

Anyways, back to my story! I couldn’t think of what to say, so I stammered, “Oops! I, um, thought this was the bathroom!”

I wanted to just jump up and run out, but OF COURSE all my art pens had fallen out of my backpack. It felt like it was taking FOREVER to pick them all up!

It felt like I was in quick sand, moving in slow motion. I just wanted to get out of there! I SERIOUSLY considered yelling, “Keep the pens!” and running out!

Finally one of the teachers, who I didn’t recognize, got on her hands and knees to help me. Then after we got them all in the bag, she smiled at me and said, “Congratulations young lady!”

So I said, “Um, thanks. I thought I’d never pick all those pens up!”

Then she laughed and said, “No I meant the award…” but then stopped herself.

This other teacher, who I didn’t recognize either, gave her a look and then said, “Shouldn’t you be getting back to your class?”

It seemed like he was trying to stop her from saying too much, and he was kind of intimidating so I practically ran out.

But the cool thing is I won a super important award!!! I have NO IDEA what it’s for, but I repeat…