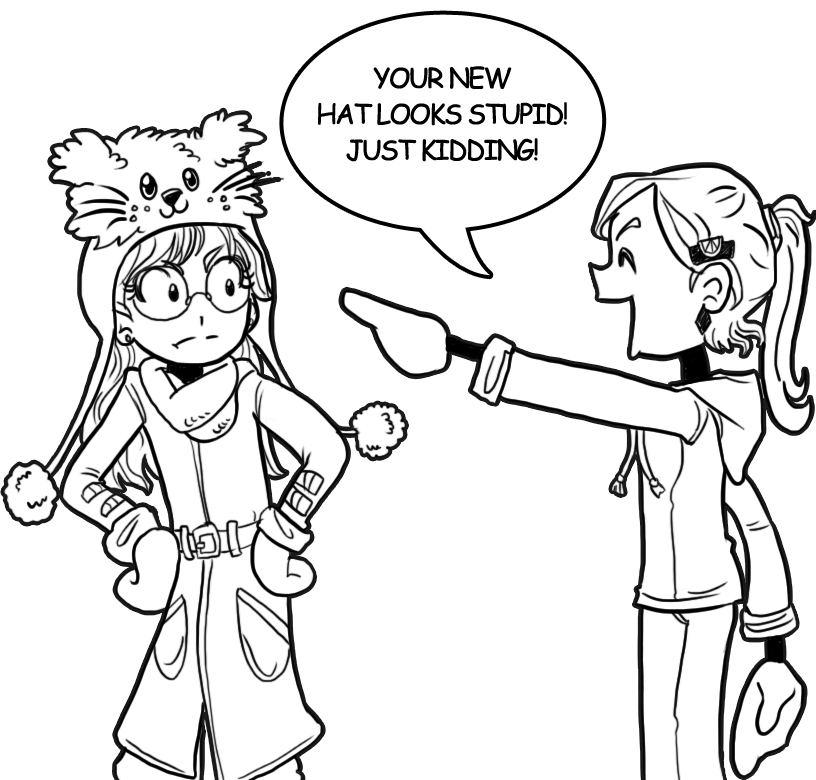 This question comes from May. She writes:

My friend and I had a fight because she always makes fun of me and says, “I’m just kidding.” Still, it hurts so I stopped talking to her, but at the end of the day I thought about giving her a second chance.

Then the next day she and another friend yelled at me because they saved a seat for a friend of mine and I wanted that seat. I wasn’t really going to take it. I was just kidding! So now I am mad at my friend and she is mad at me. I feel confused about who is right and who is wrong. What should I do?

Hi May! I don’t want to say your friend’s WRONG, because I don’t know her and the whole situation, but let me start by saying…she’s WRONG!!

Well, she’s wrong about one thing for sure: making fun of you and then saying, “I’m just kidding!”

I mean, that’s just plain mean-spirited, and something you don’t do to a friend. I can’t even imagine telling Zoey, “You smell like a sewer today. Just kidding!!” Or telling Chloe, “Your face looks like a horse’s face. Just kidding!”

Unless your friend was raised by wolves and never learned the difference between being nice and being mean, she’s probably aware that it hurts to be made fun of, even if she pretends it’s a joke.

As for the seat thing…

If she and another friend saved a seat for a THIRD one, but they didn’t think about saving a seat for you…AND she makes fun of you…well she might not be a great friend!

If you think she IS a good friend, and that maybe she just wanted to sit with some different people on that day, then I say ask her what’s up!

Tell her how it hurts your feelings when she makes fun of you, even if she pretends it’s no big deal. Also, if you did the whole “just kidding” thing at lunch because you REALLY wanted to sit with her but felt left out, tell her that!

You probably don’t want to say, “You’re wrong!” because she might just shut down and not hear you out. Just tell her how you feel about all this stuff.

If she listens to your feelings and takes them seriously, you’ll know she’s a friend worth keeping!

What do you guys think? Do you have any advice for May?