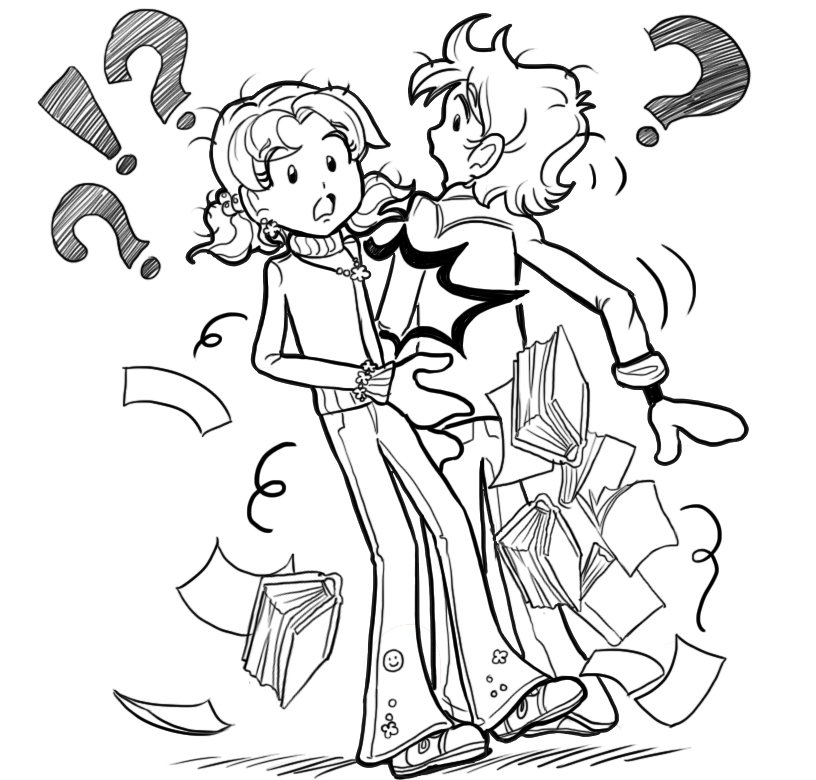 Last week I felt SO SURE I knew exactly how Operation Adult Diaper Video was going to go down!

I figured I could get my mom to arrange a play date between Brianna and MacKenzie’s sister Amanda.

I could go with her when she went to drop Brianna off, say I needed to use the bathroom, and then sneak into MacKenzie’s room to erase the video.

I thought this sounded like an awesome plan, then I realized it would be super hard to make this all work!

For one thing, Brianna would have to agree, which she probably wouldn’t do…and I’d hate to make her hang out with a mini MacKenzie. That would be cruel and sadistic!!

For another thing, it would have to be a day when MacKenzie wasn’t there, but I’d need access to her cell phone to delete the video on there AND on her computer.

And what are the odds MacKenzie would EVER go out without her cell phone? That would be like going three minutes without obsessively, obnoxiously applying lip gloss…it just wouldn’t happen!!

When I realized this plan wouldn’t work, I was totally bummed out! Seriously, I was sleepwalking through school like a zombie.

I actually walked RIGHT into Brandon in the hallway, and dropped three books that I was carrying. This one super heavy one fell right on his left foot.

OMG I felt SO bad! He was trying to pretend it didn’t hurt, because he didn’t want to make me feel bad, but it was super obvious!

He jumped back and went, “Ahhh!” And then after a few seconds, “I mean, ahh, there you are! I was looking for you!”

That KIND of cheered me up, even though I had a feeling he was just lying to cover up the HORRIBLE pain I caused his poor left foot!

And he answered, “ Oh, I, well, you know my birthday’s this month. I don’t actually have party invites yet, but, you’ll come, right?”

I was psyched that he reminded me about his birthday party, but that reminded ME about that stupid video!! If I couldn’t find a way to get it from MacKenzie, I’d have to either skip the party or be HUMILIATED in front of the whole school!

I was standing there thinking about all this, with the world’s saddest expression on my face, when I realized I completely forgot to answer Brandon.

So finally I said, “I guess it depends on when your party is. Got to get to class!”

It PAINED me to walk away so fast!! After I turned the corner at the end of the hall, I leaned up against a locker and ALMOST started to cry.

I REALLY didn’t want to talk to her, but she was all up in my face making these hand gestures. Finally I said, “What are you doing??”

She screeched, “Oh this…it’s the world’s TINIEST VIOLIN! And I’m playing a sad, sad song just for you. Poor, poor DORK won’t get to go to Brandon’s party!”

I don’t understand why she always seems so happy to see me sad. How can anyone actually like making other people feel bad?

As soon as I find a way to delete that video, I’m starting a NEW operation: Operation Make MacKenzie a Decent Human Being!

I don’t know how I’ll do it, but with God as my witness, I will make that girl change her mean, nasty stripes!!