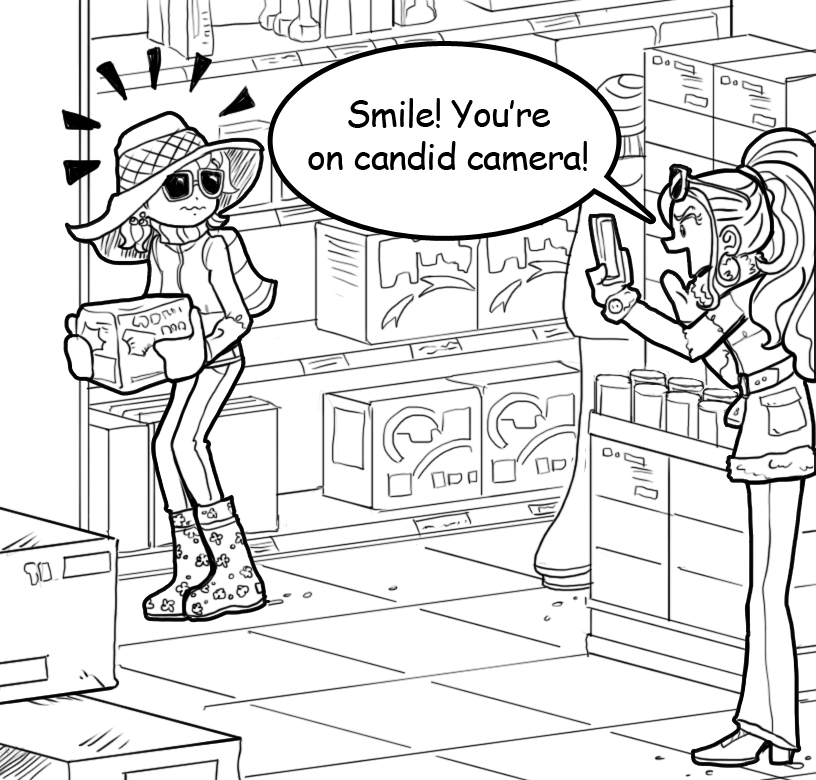 I CAN’T believe what happened yesterday!!

My grandmother’s been staying at my house for a couple of days with a friend of hers. I’m not really sure why she brought her friend, but that lady’s SUPER old, and she’s been SUPER sick!

I didn’t sleep AT ALL the first night they arrived because she spent the whole night coughing, wheezing, and snoring. Seriously, it was like she made a list of every disgusting sound known to man and then alternated them ALL night long!

Yesterday when I got home from school, I found my grandmother, my mom, AND Brianna sick in bed too. I guess they caught that lady’s nasty germs!

There was a note on the table that read:

“Nikki, be a dear and run to the store to get a few things we need. This $40 should cover it.”

Then there was a list of stuff I REALLY didn’t want to buy!!

I mean, the first two items were no big deal, but the other stuff was all super embarrassing!

I didn’t even know what “stool softener” was, but I figured it was something gross since it was between adult diapers and a plunger!

I decided to wear my mom’s big floppy hat and sunglasses, just in case I saw anyone I knew. It wasn’t my smartest idea, since no one wears a beach hat in the winter, but I figured it was better to look dumb than disgusting!

When I got to the store, I found the cough stuff pretty easily. I’ve had a TON of colds before, so I knew where all that stuff was.

But I couldn’t find the other items. I mean, you’d think they’d just make an aisle labeled “Gross” and put it all together…but nope!

I went to one of the cash registers to ask a sales clerk where I could find the stuff, but he wasn’t sure, so he yelled across the store, “Hey Bill, where do we keep the adult diapers?”

I felt like EVERYONE was looking at me! Clearly they weren’t for me…I’m not even an adult!

When I got to the aisle, I was really frazzled. I just wanted to get the stuff and get out of there! I didn’t even look to see what different kinds they had. I just grabbed the first stuff I saw.

Then I heard it….MacKenzie saying, “I always knew you were a big BABY! Smile for the camera!”

She was RECORDING me grabbing a pack of adult diapers off the shelf!

But OF COURSE she didn’t stop. Instead she started laughing, and then when I was BRIGHT RED she ran out of the store.

I was so flustered that I ran out without buying the stuff I was supposed to buy, so my Dad had to go out later to get it.

While he was out, I saw it…the worst thing EVER…an email from MacKenzie with the video she took, except she made it into a remix.

And the whole time I was hiding behind this big floppy hat and sunglasses, which made me look even more suspicious and guilty!

Her email read, “Don’t want this video to go viral on YouTube? Meet me behind the school tomorrow afternoon.”

When I really thought about it, the video wasn’t THAT big of a deal, but still I didn’t want everyone all up in my personal family business!

I just KNEW she was going to try to get me to do something I didn’t want to do, and I was right!

I have to run. I’ll tell you the rest on Thursday!