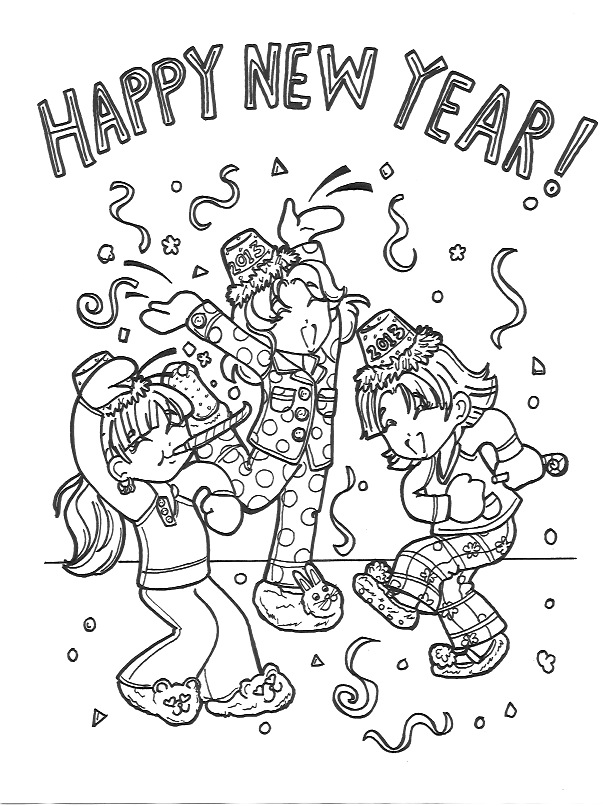 After my last New Year’s Eve sleepover, I decided to make it a tradition…but this year was WAY better than last year!!

First of all, Mom let Brianna sleep over HER friend’s house, which was totally cool for us! Brianna just LOVES to barge in my room when Chloe and Zoey are over, as if they’re DYING to talk her.

Last week when we were all hanging out, she ran in wearing my mom’s high heels with lipstick all over her face and squealed, “Let’s talk about crushes!!”

She’s always trying to be one of us, but none of us wear heels OR lipstick…and I’m pretty sure Brianna’s only crush is the orange soda kind!

Last night there was none of that! Also, Mom and Dad pretty much left us alone.

Around 11:30, they knocked on my door, and I was SUPER worried that they might say, “Hey kids, why don’t you come in the living room so we can all do the countdown together!”

It’s not that I don’t like hanging out with them. It’s just that they’re SO embarrassing sometimes!!

Whenever I have friends over, they seem to only want to do three things: Pull out baby pictures of me NAKED in the tub, spit on napkins to wipe stuff off my face, or initiate sing-alongs…WITH dancing.

I thought for sure they’d want to show Chloe and Zoey their synchronized Gangnam Style dance…they do it ALL the time!

But last night there was none of that, either! Instead, when they knocked on the door, Dad said, “Thought you might like some sparkling cider!”

Then Mom said, “Happy New Year girls! Here’s some more candy!” Then they both closed the door and left us alone.

Maybe they made a New Year’s Resolution to give me more space instead of being all up in my personal business. See, this is why I LOVE New Year’s!

We all watched that countdown thingy on TV, and we threw confetti all over the place when the ball dropped. It was SO much fun!

We were jumping around dancing (because we were pretty loaded up on sugar) when Chloe said, “Let’s play Truth or Dare!”

She had a good point! We almost got into a TON of trouble toilet papering MacKenzie’s house, and we definitely didn’t need a repeat of THAT!

I was GOING to tell you what we wrote, but then I thought of something even more fun…you guys have to guess!

You know pretty much everything that’s happened to Chloe, Zoey, and me this year! So what do you think we wrote for:

-Our most embarrassing moment

I have a SUPER awesome prize for everyone who gets everything right! Okay, that’s a lie…but you’ll feel really cool if you guess them all. 🙂