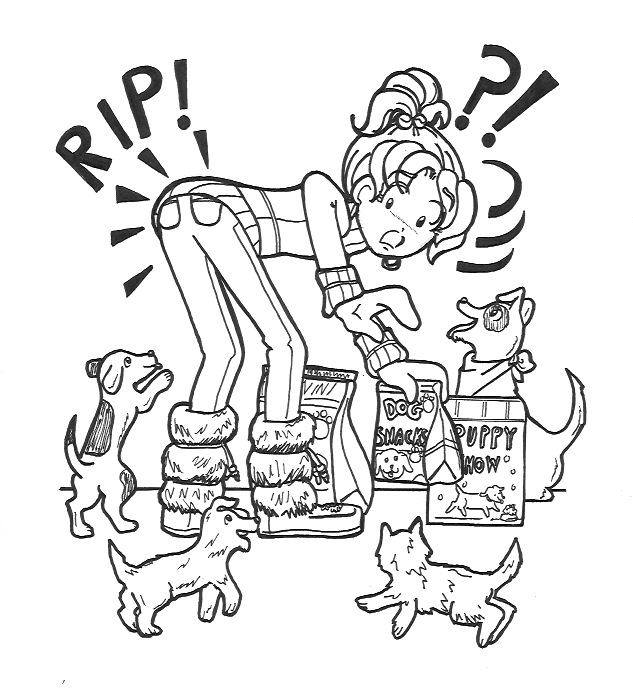 It’s not even ONE week into the New Year, and I’ve already HUMILIATED myself in front of Brandon!!

I got these SUPER cute skinny jeans for Christmas, along with these awesome furry boots. I’m pretty sure they’re BOTH from a cheap department store, but they were a HUGE improvement over the usual sweatpants and socks my mom gives me!

I was planning to go to the animal shelter yesterday afternoon, so I figured that would be the best day to wear them. I always try to look super cute when I hang out with Brandon outside of school!

When I got there, he was sitting on the ground playing with some puppies. He’s SO sweet!

I sat down next to him with a MAJOR case of RCS!! (That’s roller coaster syndrome, in case you don’t know!) He smelled SO good!

I didn’t mean to be a weirdo, but I kept sniffing because I was trying to figure out what the smell was!

I highly doubt he was wearing cologne, since he’s not a middle-aged man with greasy hair and a mustache, but he DEFINITELY smelled different than usual!

After I sniffed a few times, he said, “We have tissues in the bathroom…”

No, that’s not the humiliating thing I was talking about, but it was a little embarrassing!

I had to think for a minute there, because I couldn’t say dogs. OBVIOUSLY I’m not allergic to them! I kind of panicked actually, because I had NO idea how to finish that sentence.

Finally I blurted out, “…my new nail polish. Yup, I’m super allergic to it, but it’s just so pretty!”

I’m SO bad at thinking on the spot! But NO! That wasn’t the humiliating thing I was talking about!

After we played with the puppies for about 10 minutes, he got all excited and said, “Hey, I want to show you this awesome trick I taught Rusty! Can you grab those dog treats over there?”

He pointed to the other side of the room, where there were all kinds of treats and pet food. I was SO excited to see the trick that I practically ran over there, and I accidentally knocked the treats off the shelf.

When I bent down to get them, I heard it…Crrrrtch!

In case you don’t know what that was, it was the sound of my pants ripping right down the back!

They must have been REALLY cheap pants, because they split BIG TIME!

OMG I was SO mortified!! I jumped up and around, and put my hands over my butt, which was kind of silly since I was facing him then.

He was looking at the puppies at that moment, so I wasn’t sure if he heard, or he saw, and maybe he was just pretending not to notice so I wouldn’t be TOTALLY embarrassed!!

I didn’t have a sweatshirt to tie around my waist or anything, but I really didn’t want to leave. I’d JUST gotten there!

Still, I really didn’t have a choice.

I started to walk backward toward the door and started sniffing again really loudly. Then I mumbled, “Oh man, this nail polish is INTENSE! I need some allergy medication ASAP!”

Then I rode my bike home at LIGHTNING SPEED so I could change and get back.

Right before I was about to leave the house, Brandon texted me, “I got to head home now. See you soon!”

I was totally bummed! First, I embarrassed myself, and then I missed hanging out with Brandon.

I sure hope this isn’t a sign of how the year will play out. I definitely don’t want any more moments like that!