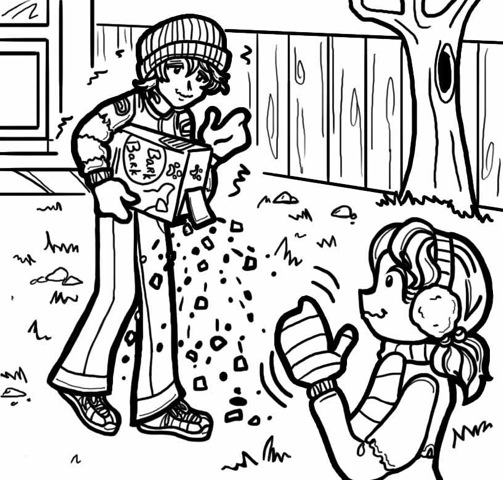 Remember I told you how I accidentally texted Brandon that my crush looked really cute that day, when I meant to send the text to Chloe?

Well, there was ANOTHER accidental text this weekend…and this one was kind of awesome!

When I saw Brandon in school after the whole texting incident, I decided to just pretend nothing happened.

I couldn’t think of any way to bring it up without making it super awkward!!

But that’s the thing though…not talking about it didn’t make it LESS awkward.

It just made it REALLY obvious there was something we weren’t saying.

I kept telling myself, “Just don’t think about it!”

But see what happens when I tell you not to think about jumbo lime green chickens.

I bet that’s all you can think about now… massive, mutant, lime green chickens!

That’s what happened every time I saw Brandon last week. We’d start talking about something else, and BAM…I’d start thinking about that text and feel embarrassed.

In lunch one day I even said, “Oh man, I think I just failed a text…I mean test!”

By the end of the week, I was actually happy that I wouldn’t see him for a couple of days.

I know that sounds crazy…seeing him is generally WAY better than not, but I needed a break from the awkwardness!!

On Saturday, Chloe, Zoey, and I decided to go to bowling at this place right near the animal shelter.

I couldn’t wait to toss the ball and knock down some pins…I had a TON of built up stress, and throwing something super hard seemed like a great way to get it out!!

When we got there, I stopped outside for a minute and just kind of stared at the shelter. I know I said I WANTED a break from Brandon, but I couldn’t help wondering if he was in there.

And I kind of missed those cute little puppies!!

Right then, Brandon walked out holding this big box and we both just kind of froze and locked eyes.

After almost twenty super awkward seconds, I raised my hand and waved at him. Then he went to raise his hand to wave at me and accidentally dropped the box.

Dog food went everywhere! He looked totally flustered and I felt really bad for him!!

Right then Zoey came outside and said, “I got the lanes and shoes…and you’re up!”

I turned my back to talk to her and said, “But Brandon needs help!”

Then she said, “Um, I think you’re seeing a crush mirage Nikki, because Brandon didn’t come bowling with us!”

I turned around to point at him and show her, but he was gone! I thought maybe he got embarrassed and ran inside or something, which would have been totally cute!!

I LOVE knowing that he gets as nervous around ME as I get around HIM!

Later that night when I was lying in bed, I heard my phone and thought maybe it was Chloe texting to gloat about winning ALL our games.

(She’s kind of awesome at it…she even brought her own bowling balls AND a special bowling glove!)

When I picked up my phone, though, I saw it was from Brandon, and it read:

I was such a klutz when I saw her today. She looked so cute!

OMG! I literally gasped!! That HAD to have been about me!

I wondered if maybe he accidentally did the same thing I did. Or if maybe he did it on purpose so I’d feel less embarrassed.

Either way, it was ALL kinds of awesome!!

He never wrote back, and neither did I. I couldn’t wait to see him in school so we could both say nothing and be on the same awkward page…together! 🙂