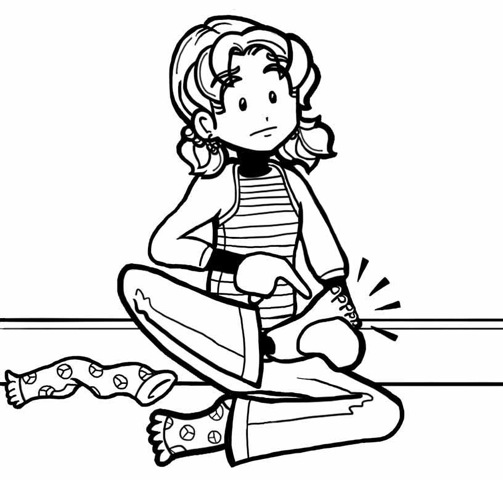 It’s not that I don’t like spending time with my family, but I have to say…family fun days are almost ALWAYS a mess!!

Even though Dad always tells Mom, “Let’s let the kids decide what THEY want to do!” he has to know there’s NO WAY Brianna and I are going to agree!

She thinks sitting on one of those coin-operated horses outside the grocery store is fun. She thinks running around the backyard in a tutu, waving a pretend stick wand is fun.

In other words, if fun were a subject in school, and if I were the teacher, she’d get a D…as in “don’t know a thing about REAL fun!”

Okay, so maybe that’s not fair…she IS six, after all. But that’s my point…there’s very little we BOTH want to do!

I tried to convince her we should all go see a movie. That way, it would be more like “family two hours of fun” than “family fun day,” and then after, I could go hang out with Chloe and Zoey!

Plus, there’d be very little chance of my parents embarrassing me in public.

They’d only have had the 15 minutes before the movie, and I was pretty sure they could have gotten through buying tickets and popcorn without spitting on a tissue to wipe my face or yelling, “Nikki, Brianna has to go number two! Will you take her?”

I thought it was an AWESOME plan, but did Brianna? NOPE! She wanted us all to go to Build-a-Bear and then Queasy Cheesy.

I’m kind of old for stuffed animals, so I wasn’t really feeling it. And I would MUCH rather have gone to build-a-new-jacket-because-this-cheap-department-store-one-is-lame, but they don’t have places for that!

Brianna and I went back and forth for a good half hour before Dad finally said, “Girls, if you can’t agree, your mother and I will just have to pick something!”

I wasn’t sure what was worse: letting Brianna decide or letting them!

But since we couldn’t agree, finally I said, “Fine! Hey Dad…don’t you just LOVE the popcorn they have at the movie theater? It’s so salty and buttery!”

Yeah, I know…I’m about as subtle as bright red lipstick!!

Mom and Dad went into the kitchen to talk while Brianna and I sat in the living room staring each other down.

After what seemed like FOREVER, they came back in, and Dad said, “OK girls…we decided that we’re not going anywhere.”

THEN he said, “We’re going to order pizza in and have ‘family share day.’”

Mom said, “Yup! We’re going to stay in and talk about the things going on in our lives and our feelings!”

For a second I thought she was joking, but nope! She was DEAD serious!! They wanted us to spend a Saturday sitting around, just…talking.

What would I tell them? I mean, it’s not like I love broadcasting my personal business!!

I couldn’t believe she asked me that! I don’t really tell her anything about him…I guess she’s overheard me talking with Chloe and Zoey.

I didn’t feel like giving the WHOLE family a crush play-by-play, so I said, “Actually, you know what I REALLY want to talk about…I have this nasty ingrown toe nail and it’s been driving me NUTS!”

After I went on and on about it for WAY longer than anyone should ever talk about something so INSANELY disgusting, Dad said, “Wonder when that pizza’s coming!”

After that he decided to go out to pick it up, and “family share day” came to an abrupt end.

I was SO glad. I have a feeling we won’t do this again…but in case we do, I have a whole list of not-at-all-interesting things to share!!