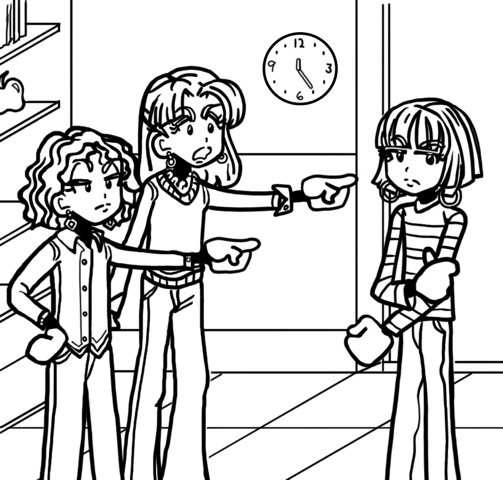 My friends keep accusing me about something they think I said, but I didn’t say it! It was about the boy I used to like. It’s getting really out of hand! How do I stop them from accusing me?

Hi Kate! First of all, let me just say I can tell that this is a super stressful situation! I remember this one time Brianna kept crying because she was convinced I called Miss Penelope “ugly.”

I may have called Miss Penelope silly…behind her back…but I’d NEVER make Brianna think she has a less-than-pretty hand! And it was driving me NUTS that she kept telling EVERYONE I was a mean, lying, hand-insulter!!

Since you mentioned it’s about a boy you used to like, they might just think they’re teasing you and that it’s no big deal. But even if that’s the case, clearly, it IS a big deal to you, so that means they need to realize that!

I think you should sit them down and just tell it to them straight. I’ve made this little script for you…all you need to do is fill in the blanks!

We’ve had so much fun together!

So I really need you guys to believe me. I know you might think it’s no big deal, but it hurts my feelings when you keep accusing me of saying something, especially when I’ve already told you I didn’t say it.

I’m asking you to take my word and please stop. Okay?”

I think that would do it! And if not, then I hate to say this, but they’re really not being great friends to you!

Hopefully they’ll just get the message and be cool about it, but if not, you might want to spend some time with some other friends…ones who would never do anything knowing it makes you feel bad!

What do you guys think? Do you have any advice for Kate?