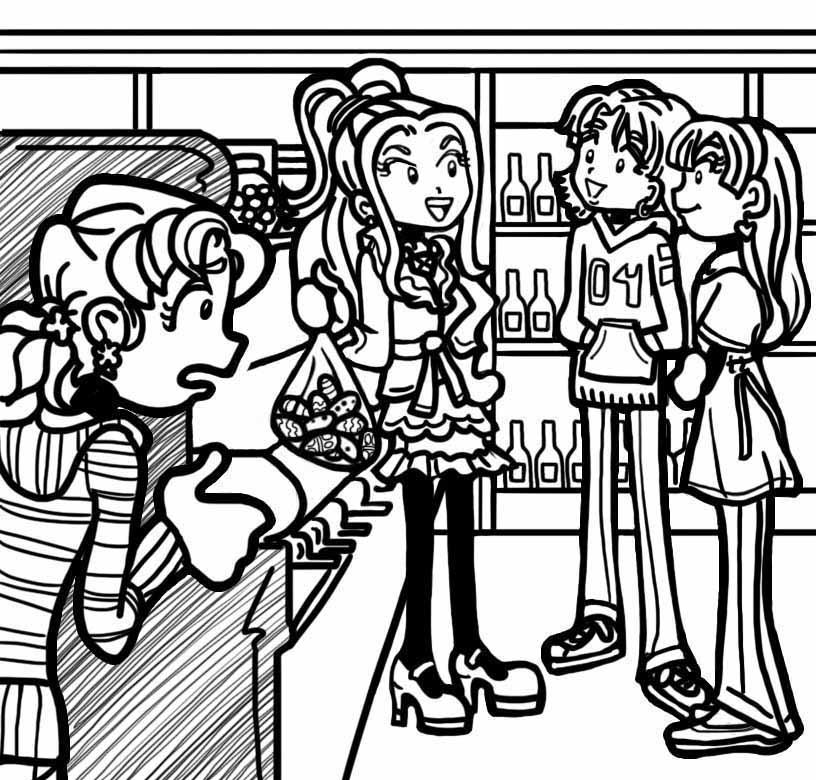 You THINK you know your best friends. I mean, I thought FOR SURE I knew mine! But NOPE!

This weekend Chloe and Zoey were supposed to sleep over on Friday night, but they said their parents wouldn’t let them because it was a holiday weekend.

I was totally bummed! We made all these awesome Easter desserts the weekend before, and we had a ton of other ones to make. (You guys gave me some awesome ideas on Facebook!)

That night, my Mom asked me to come to the grocery store to get some last-minute stuff for our family party on Sunday.

When I went to the candy aisle to get some Cadbury Mini Eggs, I saw Chloe and Zoey there.

I was kind of surprised to see them together, since they BOTH said their parents wanted them home the whole weekend, but I thought maybe they had to get last-minute holiday stuff, too.

I was going to sneak up behind them and then shout, “Happy almost Easter!!”

But just as I was creeping up to them, I saw something that almost BURNED my eyes…MacKenzie walking toward them with a big bag of Easter cookies, shouting, “Don’t forget the Peeps!”

I couldn’t believe what I was seeing…they were there getting snacks with MacKenzie!!

I thought maybe MacKenzie had mistaken them for CCPs.

I mean, they WEREN’T wearing mini skirts about as long as belts, nauseating perfume, and enough cherry lip gloss to make their mouths look like they were sucking on jelly donuts, but MacKenzie’s not the sharpest crayon in the box!

I knew I was wrong when Chloe saw her and said, “That’s right! Marcus loves Peeps!”

I wanted to just ask them what was up, but I didn’t really have to. It was pretty obvious: MacKenzie had invited them to a party and LURED them in by inviting their crushes, too!

I couldn’t believe they’d ditch me for boys!! I mean, these are my BEST FRIENDS we’re talking about. And they KNOW MacKenzie is HORRIBLE!!

If her designer dress was a hot pocket, she’d be stuffed with PURE EVIL!

Since I’d been sneaking up behind them to surprise them, MacKenzie saw me before they did and said, “Hey DORK. If you’re looking for some adult diapers to get you through the night, they’re in aisle seven!”

I was really hoping Chloe and Zoey would come to my defense and explain themselves, but nope!

They turned around looking SUPER guilty!

It was like this one time when Brianna ate ALL the cocktail wieners at the free sample section after running away from Mom and me. Right before she threw up in the middle of aisle nine, she had that exact same look on her face!!

They just kind of stared at me, and it was TOTALLY awkward for a good twenty seconds, until MacKenzie said, “Come on girls. The boys will be at my place any second now!”

I didn’t want to make a scene in the store or anything, but I couldn’t help myself.

I blurted out, “How could you guys do this to me?!? And how could you do this to YOURSELVES?! Trusting MacKenzie is like sleeping on a pile of hot coals. You’re DEFINITELY going to get burned!!!”

And Zoey said, “It’s not what it looks like. We’ll explain everything tomorrow!!”

I know what you’re probably thinking…they called me the next day, explained everything, and everything’s good now.

They’d NEVER ditch me for MacKenzie! Did I have you going at all? 🙂