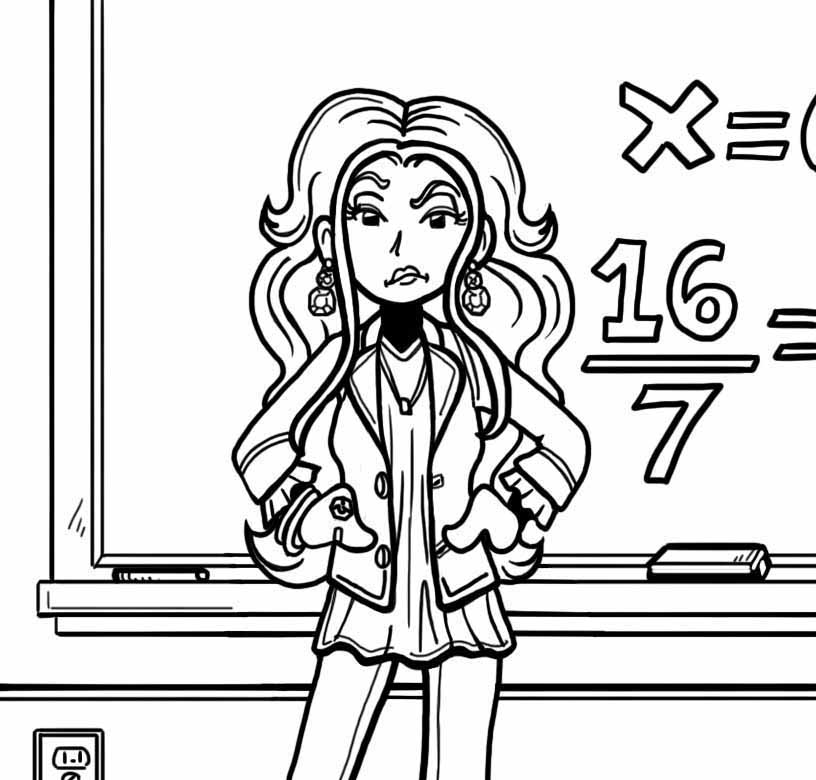 I’ve always wondered if MacKenzie will grow out of being a wretched, nasty human being someday, but I’m pretty sure I learned the answer to that today…

I THOUGHT she was pulling some kind of prank when I walked into math class and saw this on the blackboard: “Take your seats and shut your mouth. I’m Miss Hollister.”

She’s evil to EVERYONE, so I thought it was possible she locked our teacher in the janitor’s closet so she could feel all big and powerful for a good three minutes.

But nope! As I stood there staring at the words while rolling my eyes, I heard a screeching, nasally voice shout, “Don’t you understand English? Or did you forget your glasses or something?!”

I whipped around while trying to think of something witty to say to MacKenzie, knowing I’d probably only say it in my head, but then I saw it WASN’T MacKenzie talking to me…it was a woman in her early twenties who looked JUST LIKE HER!

That woman then said, “Allow me to read it for you…Take your seat and shut your mouth. I’m Miss Hollister!”

Miss Hollister…as in RELATED TO MACKENZIE!!

I didn’t know HOW they were related, but I knew it was no coincidence that they BOTH had on way-too-short designer skirts, about a pound of lip gloss, and the same exact smelly perfume that made me want to clog my nostrils with pencil erasers!

After she yelled at me in front of EVERYONE, I felt super embarrassed. I may not be great at math, but I’m a good student. Teachers NEVER yell at me!

All the CCPs were laughing, especially MacKenzie, who seemed to be telepathically communicating, “Awesome job humiliating that DORK!” to her cousin, aunt, or whoever the substitute teacher was.

Once I realized I was just standing there with my mouth open, looking as BRIGHT RED as a ketchup stain, I quickly shuffled over to my seat.

Miss Hollister picked on me ALL through class! First, she made me stand at the board until I figured out this math problem, even though it seemed pretty obvious it wasn’t going to happen.

(I have a better chance of waking up fluent in Latin than I have of understanding math!)

After about TEN MINUTES, she said, “Looks like SOMEONE hasn’t been studying!”

Then she made me stand there while MacKenzie came up and did the problem!

But the worst was at the end of class. As everyone was walking out, she pulled me aside and said, “You. Maxwell. Detention all week.”

I already felt like the dumbest kid in class, but I KNEW I wasn’t some kind of delinquent. I didn’t do anything to deserve detention!

When I asked her what for, she said, “I saw the looks you gave MacKenzie when she was doing YOUR work for you at the blackboard. I won’t tolerate bullying!”

I was just about to say, “SHE’S the bully!” when she sashayed out the door…JUST like MacKenzie!

I really hope our real teacher’s back tomorrow. WCD is bad enough with ONE Hollister…TWO is absolute torture!!