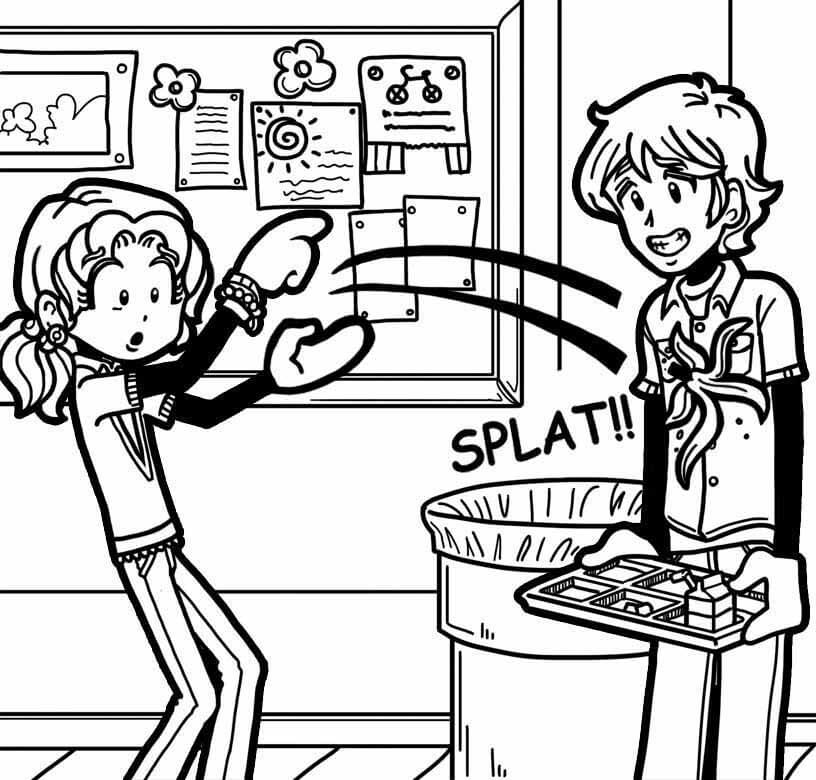 *FINALLY, THE SECOND PART OF THE BRANDON STORY!!

OK, so I have good news and bad news.

The good news: school’s out. SQUEEEEEE!!!

The bad news: I found out what Brandon was sad about, and it’s super, super sad. 🙁

A quick recap: last week, I saw Brandon in the hallway looking WAY down in the dumps.

I told him that I was his friend and he could talk to me about anything, but then when I said I couldn’t Skype chat later that night (because of my LAME parental Internet limit), he said never mind and walked away!

The next day I tried to talk to him in lunch when he got up to throw his trash away.

I thought it would make him laugh if I threw my banana peel into the garbage can, basketball-style, at the same time, and then said, “One point for Maxwell!”

But I guess I’m not a great basketball player, because instead of throwing the peel into the garbage can, I threw it RIGHT AT HIM!

I was SO embarrassed that my face turned bright red. I was just glad it didn’t hit HIS face. It would have been even more embarrassing if he had to wipe slimy banana strings off his cheek!

I thought FOR SURE he was going to be annoyed after that, but he looked up, smiled, and said, “Looks like someone needs to teach you to make a basket!”

Then I said, “How about that someone is you…today after school? And after we can get lunch, like a real date?” Except I said it in my head so no one heard it but me!

I know! That’s one I REALLY should have said out loud! But since I’m a massive dork, I said, “Yeah, I know. I kind of stink at throwing fruit.”

I stink at throwing fruit?? As if it’s some kind of hobby I practice at home? I was SO annoyed with myself for saying something so dumb!

He was starting to walk away, and I really didn’t want to miss my opportunity to ask what he was sad about…so I blurted out, “The sad thing!”

As he turned around, looking super confused, I asked, “I mean, remember you were sad before? Is everything okay now?”

That’s when he told me:

“Yeah. I mean, kind of. My grandparents are sending me to this photography camp over the summer.”

I couldn’t believe what I was hearing! I was incredibly bummed, but I didn’t want him to know, so I said, “Well, you love photography, so that’s kind of cool, right?”

I almost FREAKED OUT!! There’s stuff he LOVES here! I know I’M not stuff, but maybe he’ll miss ME while he’s away!

He must have realized what he said, because next he said, “You know, like the animal shelter and stuff. I love that place.”

Finally he said, “Well, lunch is almost over.”

I really wanted to ask if I could mail or email him while he’s at camp, but I didn’t want to seem like some kind of stalker, so instead I turned around and started walking away.

Then I felt it: SMACK! A banana peel on MY back.

Brandon smiled and said, “Oops. Looks like we both need some practice. So, um want to be my pen pal this summer? You can go to the animal shelter and email me pictures!”

Then I said, “Nah, I’m tired of the animal shelter. Have a fun summer!” JUST KIDDING!

What I REALLY said was, “Definitely!!”

So that’s the super sad news…Brandon won’t be around. But you know what…that’s okay! I’ll have a TON of fun with Chloe and Zoey, and maybe we’ll get even closer from writing back and forth!

What do you guys think??