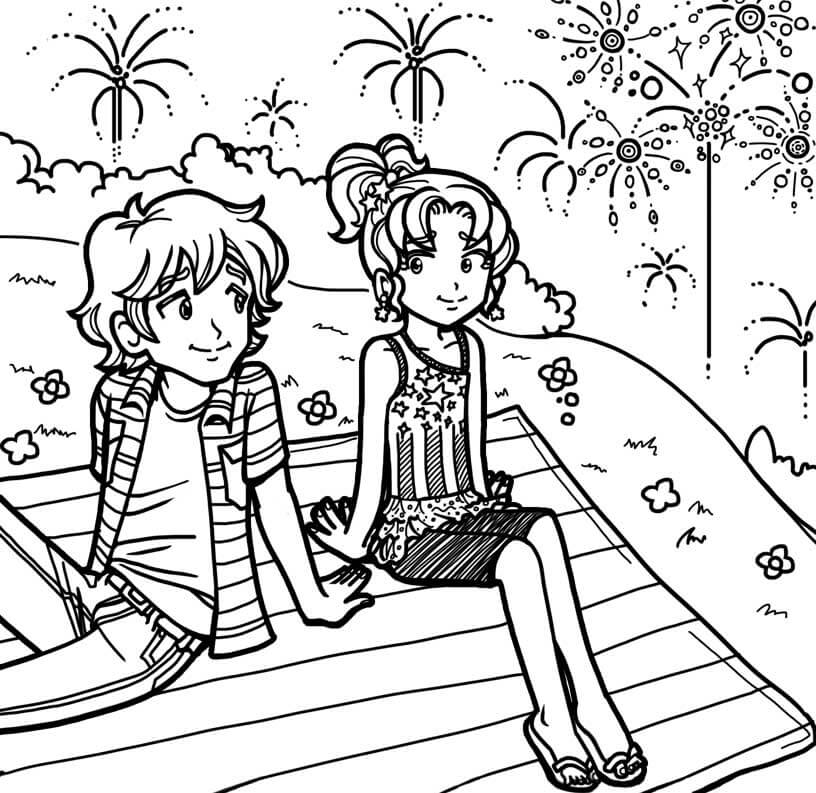 Squeeeee!!! I had SUCH an amazing 4th of July! It was SO flipping awesome that I’ve literally dreamed about it every night since.

That’s FIVE dreams of the same day, and I’m not even bored of it yet!

If my head was a movie theater and the 4th was a movie, it would be a BESTSELLER that you can see a squillion times without getting sick of it, like Twilight or The Hunger Games.

Seriously…it was THAT awesome!

Now that I’ve built up some CRAZY suspense, you’re probably wondering what happened to make this 4th movie-worthy.

To give you the full story, I should probably start on the night of the 3rd. I was sitting at the kitchen table with Brianna while she drew a picture of us watching fireworks, and my Dad ironed his “Super Dad” apron.

(I don’t know what’s worse…that my dad has an apron with the Superman logo on it, or that he IRONS it the night before every barbecue!)

RIGHT as he started humming the theme song for the new Superman movie, while standing at the ironing board with his hands on his hips, my mom busted into the room SO excited that she was practically doing my Snoopy Happy Dance.

Brianna and I started jumping up and down next to her, even though we had NO IDEA why she was so happy. (What a bunch of dorks we are!!)

Then my dad said, “What’s the good word, honey?”

Then my mom squealed, “Put down that apron dear. No barbecue for us this 4th. We’re going to Bob’s house tomorrow!!”

I had NO IDEA who Bob is or why in the world we’d choose him over hamburgers and local fireworks, but I decided to mock her by screaming, “No way! Bob’s house! Yayyyyyy!”

Then my mom said, “Mock me if you will, young lady, but Bob’s house may end up being your favorite place in the whole wide world, next to Disneyland!”

Turns out, she was right!!! Bob’s this guy who went to college with my mom and dad, and he’s a MILLIONNAIRE who owns this massive mansion where he puts on a huge poolside-celebration and an INSANE fireworks display every year.

As if that wasn’t exciting enough, Bob lives in a town where there just happens to be a photography camp RIGHT down the street…as in BRANDON’S CAMP!! I almost didn’t believe it when they told me the name of the city!!

We got up super early to get there for an all-day event kind of thing.

I asked my dad if he’d stop by the camp on the way so I could say hi, but he said, “We’re running late, and I doubt we can just drive into the camp and ask for him. Sorry honey. You’ll see him soon.”

At first I was totally bummed…but he was right! I DID see him soon, as in 15 minutes later!!

Turns out, Bob invites pretty much the whole town to his 4th of July event, including the local camp counselors and campers!!!

I was SO excited to find Brandon wandering around the pool, taking pictures, that I squealed, “Squeeeeeeee!!!!!” Except I squealed in my head, so no one heard it but me!

Brandon actually saw me through the viewfinder on his camera. He was trying to set up a shot, and all of a sudden I walked into it.

He had this HUGE grin on his face when he looked up, like he was TOTALLY psyched to see me!!

He asked, “Wow, Nikki. What are you doing here?” Then I gave him the whole how-my-parents-know-Bob-story, and he said, “Wow, this is the best 4th of July ever…because this place is so cool, I mean…”

And then he TOTALLY blushed!!

We spent the rest of the day swimming and hanging out, and we even sat super close during the fireworks.

Brandon was right…it WAS the best 4th of July ever!