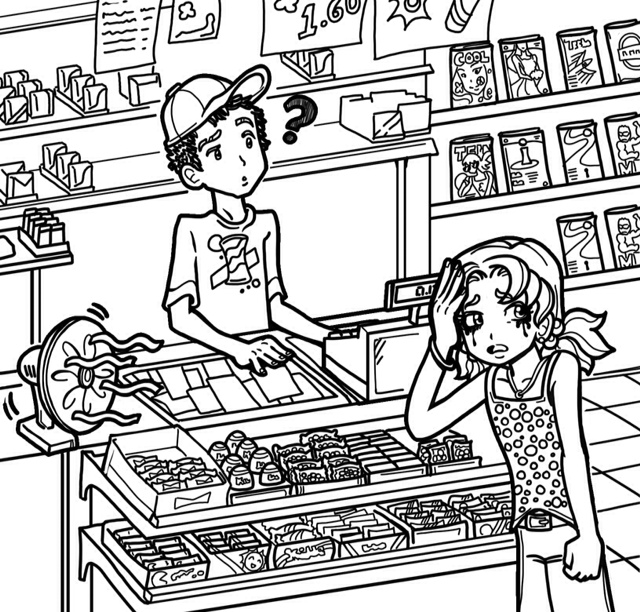 As you may remember, I recently made some AWESOME plans for this summer! And I just know I’m going to get to do all of it soon!

But so far, besides the 4th of July party, this summer’s been pretty boring. Brandon’s been away at camp, and Chloe and Zoey BOTH went on family vacations this week, which should be against the law!

Seriously, it needs to be written into the constitution that it’s unlawful for two good friends to go away at the same time when their THIRD friend will be left all alone!

I mean, would it have KILLED their parents to coordinate with each other, or even better, to have consulted with MY parents, so we could all plan our family vacations for the same week?

(Some people are SO inconsiderate! Just kidding…kind of!)

Since I was INSANELY bored, I decided to borrow some of my mom’s makeup and do a video tutorial on how to use it.

I’ve spent A TON of time looking at Tyra’s face, and she does MODEL-WORTHY makeup, so I figured it would be a piece of cake!

Turns out, applying makeup is A LOT harder than it looks!

I ended up with huge red circles on my cheeks, blue shadow practically up to my eyebrows, and eyeliner so dark that I looked like a raccoon!

And then, as I was sitting there with all this gunk all over my face, the electricity went out!

I wasn’t really bummed about messing up my video, since I’m pretty sure a two-year-old boy could do a better makeup tutorial than me! But I WAS pretty annoyed about the air conditioner going off.

It was SUPER hot in our house! Seriously, I felt like a giant had dug my house up by the roots and planted it RIGHT on top of the sun!

I started rummaging through the closets looking for our battery-operated fan, but I couldn’t find it anywhere! After that, I made one of those cheap homemade fans by folding a piece of paper a ton of times. But that was just a massive tease!

It was like wringing a sponge-full of water into someone’s mouth after a ten-mile hike in the desert…super cruel and not even slightly satisfying!!

I was going to ask my mom where the fan was, but she had fallen asleep on the couch. (I have NO idea how she stayed asleep with sweat dripping all over her body. Seriously, it looked like she was napping in a couch-shaped puddle!)

Since I didn’t want to wake her up, I decided to go down the street to the corner store and buy a battery-operated fan with some of my poster business money.

When I got there, I found an empty shelf where all the fans used to be. I was getting desperate!!

I was going to ask the guy at the cash register if they had any in the back, but then I realized he was SUPER cute, which made me totally nervous! I mean, he wasn’t BRANDON cute, but still…

Finally I decided to get over myself because I was BURNING UP!!

I walked up to him and said, “Excuse me, um, do you have any battery-operated fans in the back?”

And then he said, “No, we’re all out…but we have makeup remover in aisle four!”

Then I remembered: I had blue all over my eyelids, and big red circles on my cheeks…and it had been MELTING down my face!

I can’t believe I went out in public like that!!

This is why Chloe and Zoey can NEVER vacation at the same time again. I’m clearly WAY too big of a dork to entertain myself without opening myself up to PUBLIC HUMILIATION!!!