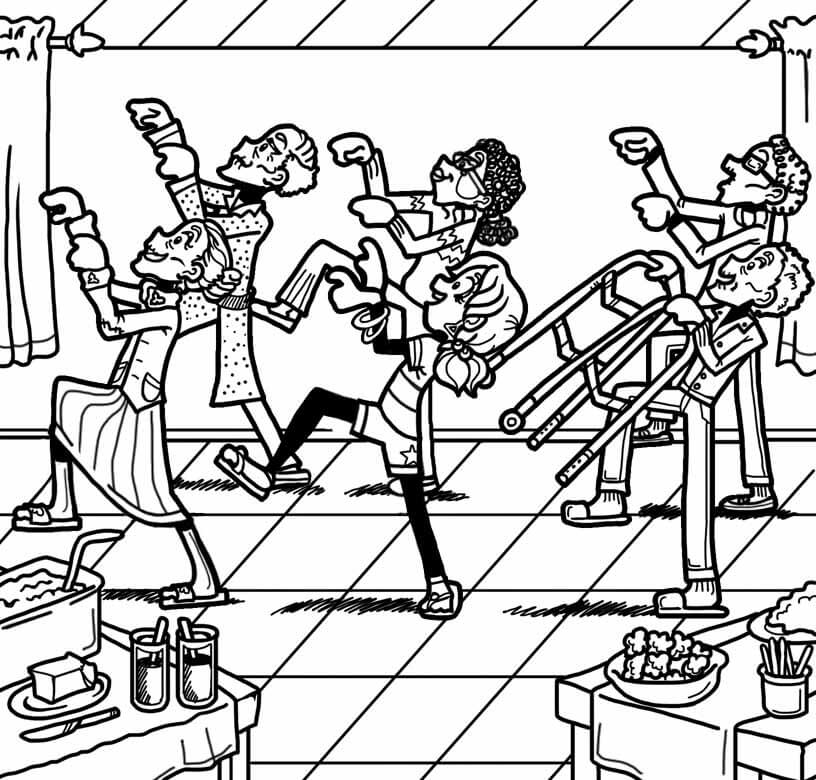 There’s this store near my house where you can trade your old clothes for other people’s old clothes. I SERIOUSLY wish there was a place like that to trade in parents, because sometimes, mine can be TOTALLY lame!!

This weekend I was SUPPOSED to hang out with Chloe and Zoey (which is pretty much my unofficial plan for EVERY summer day), but then I heard my mom telling someone on the phone, “Sure, Nikki will come help out on Saturday. She’s free all day!”

At first I thought I was just hearing things. I’ve spent more of this summer in the ocean than Nemo and Dori, so it was entirely possible my ears were all clogged up with salt!

Then I heard her say, “Nah, she won’t mind. She has a whole month left to hang out with her friends. She can spend ONE DAY giving back to the community!”

At that point, I knew she was volunteering me for some volunteer thing, and that was just WAY too much volunteering for one conversation!!

So I said, “Um, Mom, what are you talking about? I have plans this Saturday!”

And she said, “I know, I just made them for you! There’s a senior barbecue at the community center, and they need help with arts and crafts. Trust me, you’ll have a blast!”

At first I pictured A TON of super fun senior high school boys hanging out, eating hamburgers, and looking so cute that it should be illegal.

Then a little old guy named Irving rolled his wheelchair RIGHT through my fantasy, when I realized she meant senior citizens…as in old people!

Now, I love old people as much as the next girl. Seriously, my grandpa is SUPER COOL (except when he forgets I’m not five and amused by bodily functions, and then asks me to pull his finger).

But still, Saturdays are NOT sit-around-making-macaroni-necklaces days. They’re wild, crazy anything-can-happen-with-Chloe-and-Zoey days!! (And by that, I mean, swim-watch-movies-and-pretend-we’re-actually-much-cooler-than-that days.)

My mom was completely delusional…there was NO WAY I’d have a blast at an old person cookout!

I tried to think of an excuse on the spot to get out of it, but my mind went TOTALLY blank right after I said, “I can’t go! I’m allergic to…”

So then I blurted out, “…art supplies!”

I may as well have said I’m allergic to my own nose. That’s how DUMB and obviously NOT TRUE that was!

Since my mom was totally unwilling to budge, I ended up having to go.

Not a SINGLE person there wanted to do arts and crafts, so I spent the first thirty minutes doodling while texting Chloe and Zoey. It seemed like SUCH a complete waste of my time to be there!!

I was just about to call my mom and ask her to pick me up when the music came on…and not just ANY music, but Thriller! I LOVE that song!!

I was SUPER tempted to get up and do the ballet of the zombie dance I did with Chloe and Zoey…but before I got a chance, this tiny old lady beat me to it!

At that point, I couldn’t helped myself…my inner zombie was DYING to come out, so I got up next to her and started doing my thing!

By the end of the song, almost EVERY old person was doing the Thriller dance…including this one guy dancing with a walker!

When I first got there, I seriously questioned if some of them were even BREATHING…and now they were all up, jumping around like a bunch of kids (prematurely aged, grey-haired kids, but still).

They played A TON of super fun songs after that, and I danced for pretty much the rest of the afternoon.

I’m not going to lie…I STILL missed hanging out with Chloe and Zoey. But my mom was right…I DID have a blast!