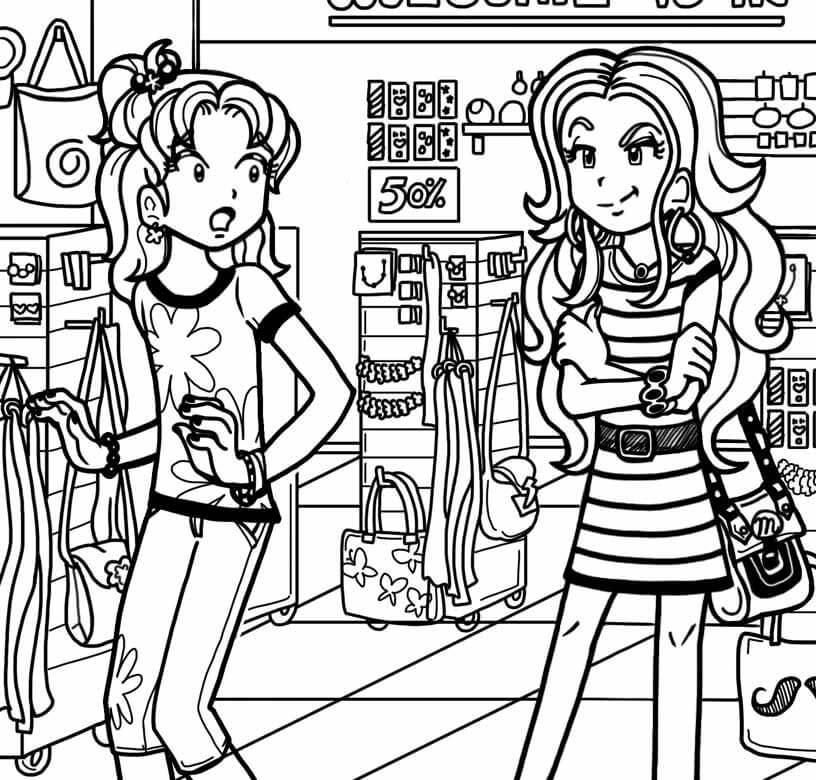 I got through ALL of July without seeing MacKenzie even once, and it was totally AWESOME!! I really thought I might make it through the whole summer without ANY MacKenzie drama, but I was sorely mistaken!!

The other day my mom and I went to the mall.

Since I like shopping with my mom as much as I like cleaning my living room carpet by hand, one lint piece at a time, I told her I’d meet her in the food court after about an hour. Then I headed to Claire’s to look for some cute new headbands.

I LOVE that store!! Sometimes I don’t even buy anything. I just find ideas for stuff I can make at home.

Anyways, I was taking pictures of this super cute flower headband when I heard an OBNOXIOUS voice screech, “You know, it doesn’t really matter what you buy, as long as you get a plastic bag…to cover your head!”

Then I heard “click, clack, click, clack,” and felt a dark cloud of EVIL approaching RIGHT behind me.

You guessed it…MacKenzie was walking up to me, and fast!

Can’t she see me and hide behind a bag display to avoid me, like other NORMAL people who can’t stand someone else? It’s like she feels this COMPULSION to torment me just because I’m breathing the same air as her.

When I turned around, she was SO CLOSE we practically touched noses.

Then she said, and I kid you not, “This is MY store. Go back to Cheap Charlie’s Dollar Store, DORK!”

(For the record, Cheap Charlie’s has some cool earrings too, which she’d know if she wasn’t such a fashion snob!!)

Anyways, after she made that SUPER rude comment, I said, “Oh geez, I’m sorry! I didn’t realize you changed your name to Claire, went back in time, and founded this store. My bad!”

She looked SO angry that I thought fire might come out of her nose. It was kind of terrifying!!

Then all of a sudden she started acting super nice to me. She said something like, “I was just kidding. You really have great taste in headbands!”

Then she reached behind me, grabbed this glittery one, and said, “Here, try this on.”

What she did next was even weirder!

She grabbed me by the shoulders, walked me over to the mirror, and then, while standing right behind me and STROKING my hair, said, “Yeah…definitely buy this one. I have to dash. Toodles!”

It was SUPER bizarre! One minute, crazy mean and nasty, the next minute, over-the-top friendly.

After she sashayed out of the store (I just HATE it when she sashays!), I stood there feeling kind of traumatized and confused.

It was getting close to the time when I was supposed to meet my mom, so I put the glittery headband back and headed toward the door.

Then I heard it: Waaaah, waaaaah, waaaaah! No, it wasn’t Brianna having a tantrum. I just didn’t know how to write out the sound of a security alarm!

I put my hand in my pocket and couldn’t believe what I found: the flower headband I had been looking at! MacKenzie must have put it in my pocket to set me up.

She’s done some pretty low things before, but trying to get me ARRESTED was sinking to a whole new low!!

Luckily, the woman at the register believed me when I told her the world’s worst human being had set me up.

Actually, she said, “Oh, MacKenzie Hollister? She comes in here all the time. I don’t like her attitude. She’s the worst customer ever!”

Even sales clerks know how horrible she is!

Can you believe MacKenzie did that?? What’s WRONG with that girl??