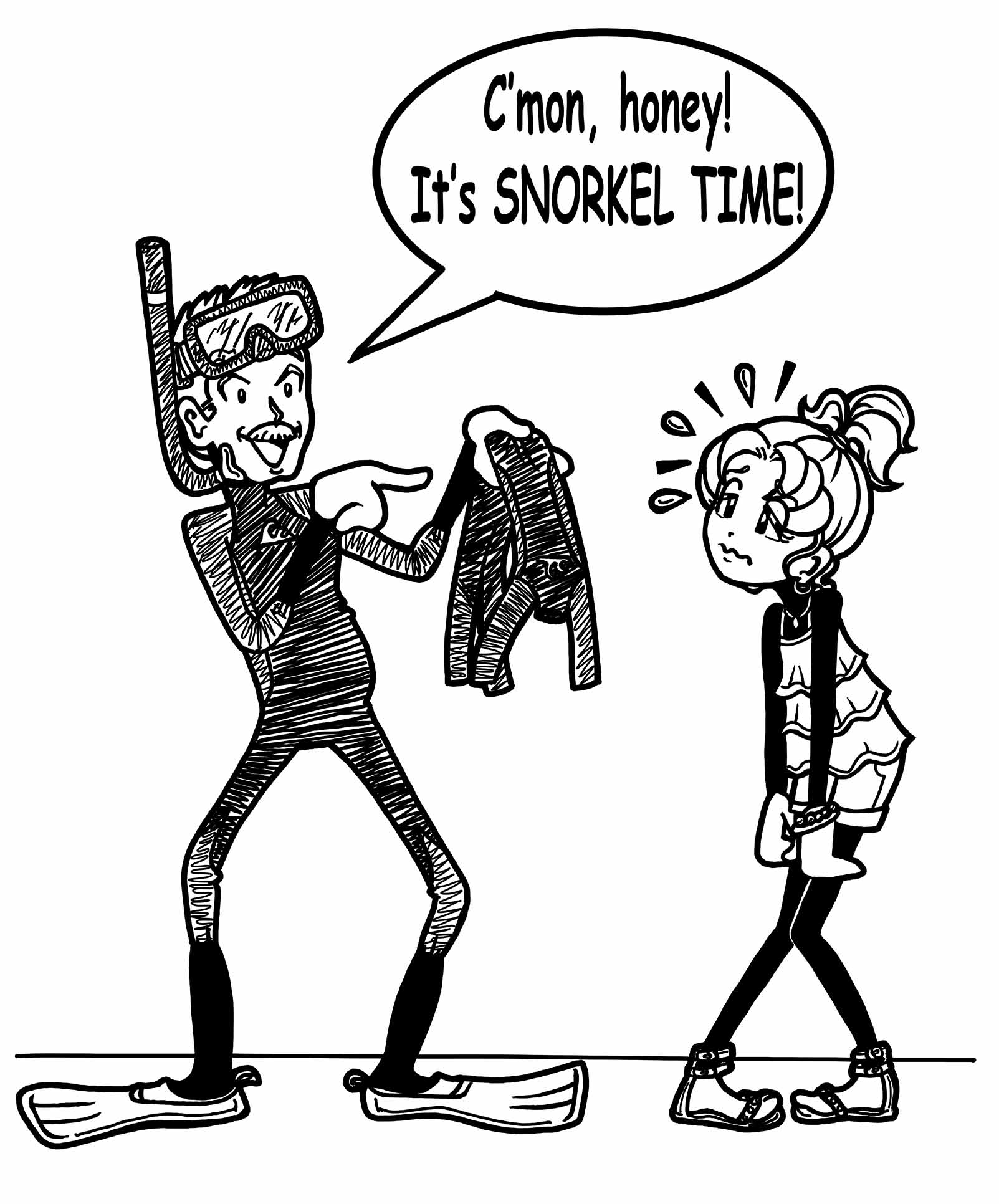 My parents should SERIOUSLY consider changing “Family Fun Day” to “Family Humiliation Day,” because that would be WAY more accurate!

Seriously, almost EVERY time we go out together something super embarrassing happens!

This weekend, we all agreed we’d have a picnic in the backyard and then turn on the sprinkler.

Usually I think running through a sprinkler is a lot like sitting on a bench with your feet in a bucket of water…a HUGE tease and nowhere near as fun as ACTUALLY swimming!

But I was relieved to keep our unique Maxwell brand of crazy neatly contained in our yard!

Just as I was about to open the door to go outside, I heard, “Aren’t you forgetting something?”

Then I turned around and saw it: my dad in a way-too-small wet suit.

You know, it’s one of those black, skin-tight rubbery things that covers everything but your feet, hands, and head. Except his feet WERE covered…with massive flippers.

Seriously, he looked like a man-seal hybrid, and what’s worse, he was holding a smaller wet suit…for me!

I’ve never worn a wet suit because I’ve never done anything where you need one. And I DEFINITELY wouldn’t need one to run through a sprinkler!

So I asked, “Um, Dad? Did you tie a bunch of balloons to our house in the middle of the night, and move it to a small island or something??”

Then he said, “Nope, but I’m moving US there. We’re going snorkeling today!”

I have NO IDEA why he’d think I’d want to snorkel since I’m a HORRIBLE swimmer!

I knew Mom wouldn’t want to do it since she thinks that anyone who swims in the ocean is “shark bait.” (Someone’s seen “Finding Nemo” too many times! Another great movie, but still!)

I also knew Brianna wouldn’t be snorkeling, since she still uses water wings in the pool.

That meant that my dad wanted to turn “Neatly Contained in our Backyard Family Fun Day” into “Super Public and Totally Stressful Father/Daughter Day.”

And there was just NO talking him out of it! He kept saying, “Bob’s boat. Sunshine. Fish. You’ll love it!”

I was OBVIOUSLY being sarcastic, but before I knew it, I was sitting in the backseat in an itchy wetsuit while my mom reminded me OVER AND OVER, “Stay away from the sharks!”

By the time we got to the dock, I thought I was going to HURL! I seriously wished I’d brought a batch of fake vomit so I could stay safely on the boat with my mom and Brianna.

Jumping into the water felt like jumping out of a plane without a parachute. That’s how TERRIFIED I was!

I lasted all of ten minutes swimming around looking at fish. I seriously thought I might turn around and see a MASSIVE great white waiting to eat me!

And I was SO out of breath from trying to stay afloat that I thought I might hyperventilate…and then drown!

What’s worse, I couldn’t really see where I was going. It’s super dark in the ocean!

Finally I decided I’d had enough, and swam my way back to the boat. Just after I plopped my body up onto the deck, while I was flailing like a fish out of water, I saw it: a bunch of smiling pimply teenage boys, who seemed to think my drowning, convulsing, and freaking out was some super lame attempt at flirting!

It was the wrong boat! It was RIGHT next to ours, but it wasn’t there when I jumped in the water.

I REALLY didn’t want to jump back in, but the only thing worse than doing that would be NOT! So I said, “Um, wrong boat…my bad!”

When I got back to Bob’s boat, my mom screamed, “Thank goodness! I thought I saw a fin!”

I was TOTALLY traumatized! Next time, I’m going to confirm the night before so there’s ABSOLUTELY no confusion. It’s either a backyard picnic, or they can COUNT ME OUT!