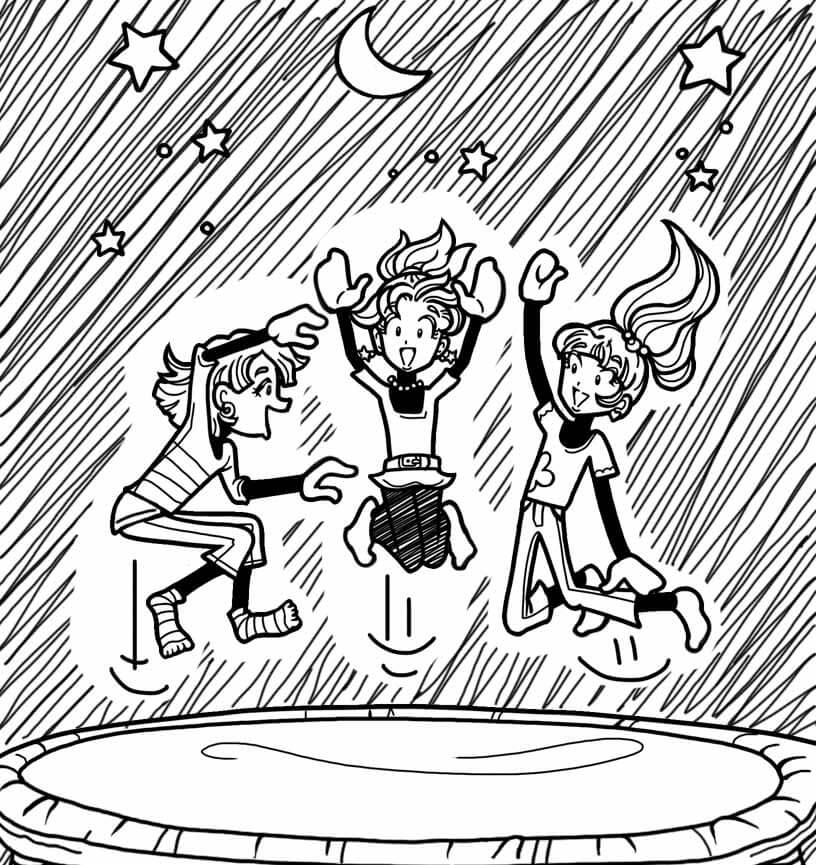 This weekend I had the best sleepover EVER! I know I always say that (I’m easily amused…so sue me!) but this time it really was ALL KINDS of awesome!!

Even though I knew it was just going to be Chloe, Zoey, and me, I made these super cute pop-up invitations.

That’s right, POP-UP…like kids’ books! When you open it, a little paper Chloe, Zoey, and Nikki pop up, wearing pajamas and dancing.

Then I did a TON of planning so we’d have all kinds of fun stuff to do.

And then they came over, we had the sleepover, and the next morning, they went home. The end.

After they got there at 7:00, I led them into the kitchen, where I’d set up a make-your-own-pizza station.

But it wasn’t just ANY pizza…it was DESSERT pizza!

We used piecrust for the crust, and chocolate sauce and peanut butter for the sauce. For the cheese, we used frosting and whipped cream.

And then there were A TON of toppings! There were cookie pieces, candy bar pieces, marshmallows, sprinkles…it was like DESSERT LAND!

After we got a CRAZY SUGAR RUSH, I led them to the backyard, where I had a tent set up and this huge trampoline that I bought with some of my poster business money.

It’s super fun to jump on a trampoline, but even MORE awesome in the dark! I know what you may be thinking…isn’t that kind of dangerous?

Nope! It wasn’t pitch black because I had these outdoor black lights positioned around the yard, which made our white shirts and socks glow.

We decided to see who could come up with the coolest stuff to do on there, and I thought for sure I’d be the winner.

After I bought it last week, I spent a whole day messing around on that thing! But Zoey totally surprised me.

First she pulled out my jump rope and did this thing called a “jump rope snake.”

Basically, she moved the jump rope back and forth on top of the trampoline like an “S,” and then we had to jump over it without letting it touch our feet.

After that, she suggested that we draw a hopscotch thing on there with white chalk. I hadn’t played hopscotch in FOREVER. It was so much fun to do it on the trampoline!

After that, we were pretty much exhausted so we decided to just lie down on it, look at the stars, and talk.

I told them how much I’ve missed Brandon this summer, and CAN’T WAIT for school to start just so I can see him regularly again.

Then Zoey told us how she’s thinking about doing an online advice column, like me, since she’s pretty much Dr. Phil in lip gloss and hoop earrings.

But the BIGGEST surprise came from Chloe. Out of nowhere she told us this HUGE secret that totally shocked me.

Sorry to keep you in suspense, but she made us PROMISE we wouldn’t tell ANYONE!!

She didn’t say you so couldn’t guess, though! What do YOU think the big secret was??