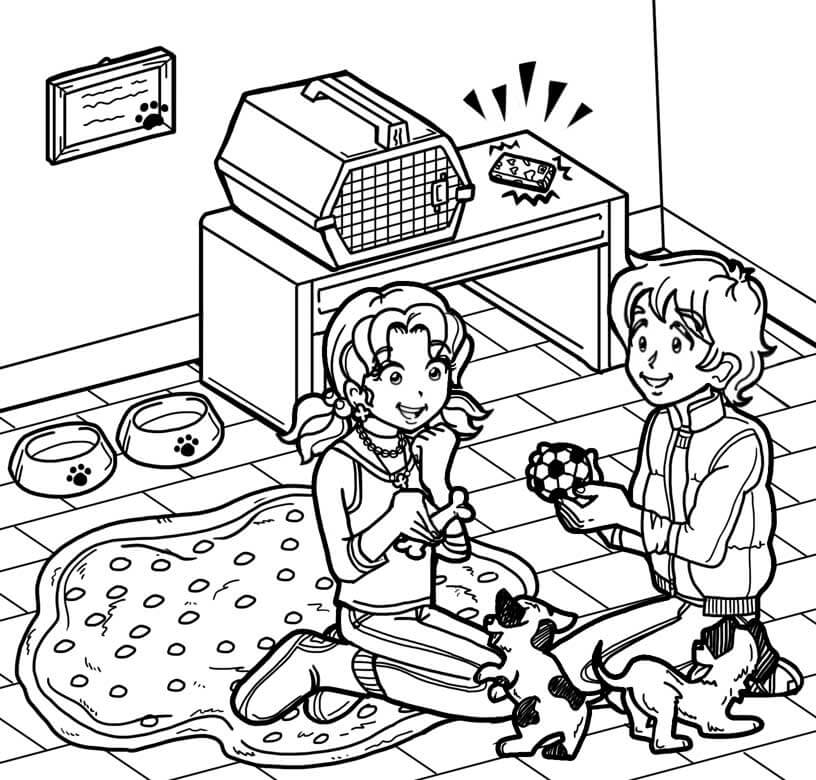 I am THIS CLOSE to breaking down in tears!!!

And I don’t cry a lot. I’m not like SOME six year old people I know who FREAK OUT just because they spill a MICROSCOPIC dot of chocolate ice cream on their Princess Sugar Plum dress!

Why am I one sniffle away from all out sobbing, you ask?

I think Chloe and Zoey are mad at me, and it’s all over this huge misunderstanding!

This weekend we were all supposed to hang out on Saturday and then have a sleepover that night.

We didn’t really have anything specific planned for the day, but I was super excited about the sleepover. We always have so much fun together!!

That morning, Brandon called and asked me to help him at the animal shelter, and he said it was an emergency!

His grandmother was really sick, and if I didn’t help him, he’d be there all by himself.

What if his grandmother called and needed him to go home with medicine or something? Then there’d be NO ONE at the shelter!

Obviously I had to help. It’s what any good friend would do!!

Since I knew Chloe, Zoey, and I didn’t have anything planned, AND we were going to spend the whole night together, I didn’t think they’d mind if I bailed on the first part.

So I texted them both: “Huge animal shelter emergency!! Can’t hang today, but can’t wait for tonight!!”

I had SO MUCH fun at the shelter, like I always do! Brandon and I did a little puppy puppet show.

No, you don’t have to call the animal rights people! We didn’t hang the puppies by strings or anything. We just put two of them on a little platform, and then each of us made up lines of what we thought they’d say to each other if they could talk!

I was having so much fun that I didn’t check my phone until about 5:00. And I really wish I did! BOTH Chloe and Zoey had texted!

Zoey wrote: “Oh no! Maybe we can come help so you don’t have to stay all day. We have a HUGE surprise for you later, and it’s really important!”

And that was just the texts! They each called me a few times, too, but I had my phone on vibrate.

Before I even checked my voicemails, I wrote back the same thing to both of them super fast (as if maybe my text would go back in time if I wrote it quickly enough!!).

I wrote: “So sorry! I was busy all day and just saw your text! What time for the sleepover tonight?”

Then Zoey wrote back: “Hope you had fun. My dad’s taking us to a special Taylor Swift concert, and we won’t get home until late. Call you tomorrow!”

I was SHOCKED!! No wonder they tried so hard to get in touch with me…they were trying to include me in a super cool, once-in-a-lifetime experience that Zoey’s record executive dad set up!!

I couldn’t believe I missed it!!

I wrote back to the both of them: “OMG! I am so sorry, my phone was on vibrate…I really wish I came with you guys!! Take lots of pictures and have fun!!”

Neither of them called me the next day, and their phones went right to voicemail when I tried to call them.

Then, to make matters worse, I got super sick on Sunday night and wasn’t in school on Monday or today…and neither of them called to check on me!

I’m so nervous that maybe they’re mad at me for ditching them for a boy. We always say sisters before misters, and then I went and bailed on them to create a dog puppet show!

I mean, Brandon DID need my help, but still.

Do you guys think they’re mad at me? What should I do? Help!