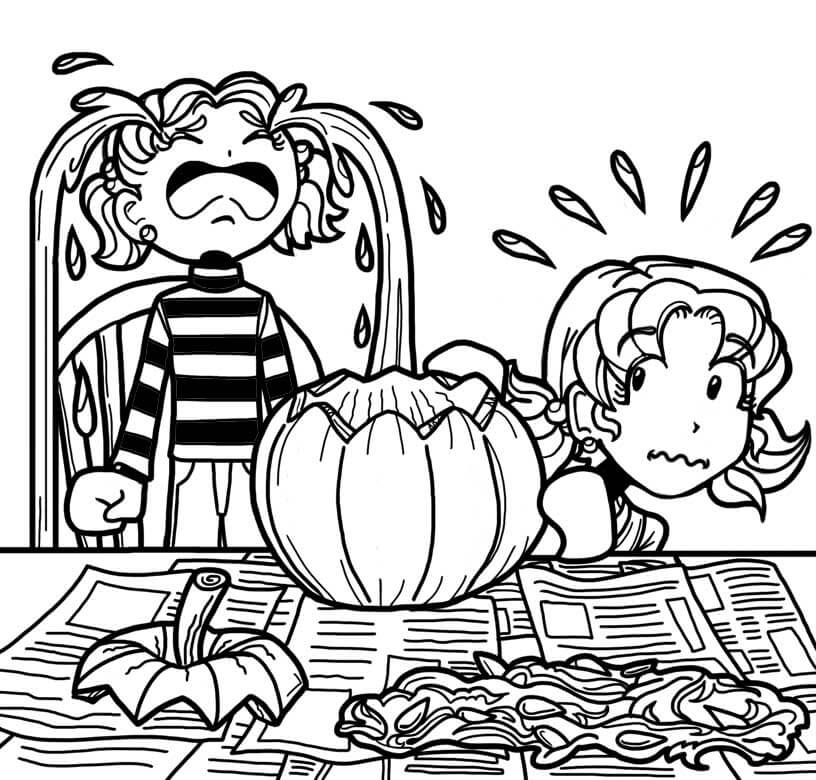 As you may remember, I’m SUPPOSED to host a Halloween party with Brandon this year, and I’ve been TOTALLY psyched about it!!

Seriously, it’s all I’ve been talking about…even in my sleep!

According to my mom, while I was napping on the couch on Friday, I mumbled, “Great idea, Brandon. Let’s play a game! How about hide-and-GHOST-seek? Haha!”

(Apparently, I think REALLY cheesy jokes are funny in my dreams!)

But this weekend something ABSOLUTELY HORRIBLE happened, and now I’m afraid I might have to cancel the party!!

It all started on Saturday afternoon. I agreed to spend the day with Brianna because she’s planning to be me for Halloween, and she told my mom she needed to spend the WHOLE weekend with me so she’d be super believable in a me-costume.

(Which is completely unnecessary…even if my neighbors knew me well, they wouldn’t be like, “Nikki would NEVER curtsey after saying ‘Trick or treat’! No Snickers for you!”)

Anyways, I told her there was no way I was cancelling all of my weekend plans so she could study me, but I figured I could give her a day.

On Saturday, we were sitting at the table carving pumpkins when she asked me to help her cut Princess Sugar Plum into hers.

I knew I could DRAW Princess Sugar Plum on the pumpkin, but I thought it would be super hard to cut her out.

Trying to explain ANYTHING logical to Brianna is like trying to convince a lion to become a vegetarian…completely pointless and kind of dangerous!

The second I said, “I can’t do it because…” Brianna started FLIPPING OUT and flailing her arms around! It was a full on tantrum, all over a pumpkin and a princess!

She wasn’t paying attention to what she was doing and she almost knocked my little carving knife out of my hand and into my eye.

I screamed, “”BRIANNA! STOP SPAZZING OUT!!

So then I whisper-yelled, “Calm down or you’re going to get us BOTH in trouble! This is why I didn’t want to hang out with you!”

I know that last part was kind of mean, but I just HATE when she gets like that! There’s absolutely no reasoning with her!

At that point she COMPLETELY lost it. She ran into my mom’s room and cried, “Nikki’s being mean to me!!”

I tried to explain that she wanted me to carve something super hard, and even though I had mad art skills, I’m not a professional carver or anything!!

But before I could finish saying it all, Brianna said, “She said she HATES hanging out with me!”

My mom asked, “Is that true, Nikki? Did you say that?”

I couldn’t lie because it’s just not my style, so I said, “Well…yeah…but…”

Before I could finish, my mom said, “She was really looking forward to spending time with you today, and then you go and hurt her feelings like that. I’m disappointed in you, Nikki.”

I HATE when parents say that!!

I figured it was no use trying to explain myself anymore because clearly she was going to take Brianna’s side no matter what, so I said, “Maybe we should hang out on a different day instead. We can just start over when we’re both in a better mood!”

And then I heard the most cruel words EVER: “That sounds like a great idea, and I know exactly which day: Halloween. YOU can take her trick or treating.”

I couldn’t believe she said that! She KNEW I was planning to host a small party with Brandon!

At that point Brianna started jumping up and down, screaming, “Yay! Nikki, since I’m going as you, you can go as ME!”

I just don’t get her! One minute she’s trying to get me in trouble…and the next minute, she’s psyched to spend more time with me.

I tried so hard to get my mom to change her mind, but she wouldn’t budge!

I REALLY don’t want to cancel this party, but I have no idea what to do. What do you guys think? I’m in DESPERATE need of help!