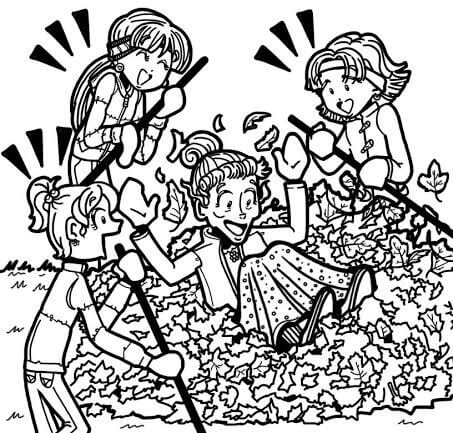 I HATE when my mom volunteers me to do stuff without asking me if I want to do it. She does it all the time!

I’ll be lying in bed on a Saturday morning, daydreaming about the perfectly buttered popcorn I’ll eat later that night at the movies, and then BAM! I hear it: “Sure, Nikki can babysit your certifiably insane three year old beast of a son tonight!”

(Except without the insulting stuff…)

Or, I’ll be singing in the shower before heading to the mall, with my hair shampoo-sculpted into a faux hawk, and then BAM! I hear it: a knock on the door followed by, “Hurry up, Nikki! You have to be at the community center in 15 minutes!”

I don’t know why she thinks I’m a professional do-gooder and she’s my agent, but it’s SUPER annoying…and I’m sick of it!

This weekend I decided I wasn’t going to let her ruin my plans. It didn’t matter how much she tried to force me to be a good person. There was a bowling lane with my name on it, and no amount of motherly manipulation would change that!

What I didn’t count on was the huge dose of neighborly guilt that followed the motherly manipulation.

It started with, “Nikki! Get out of bed sleepy head! The phone’s for you!”

That was WAY too much enthusiasm for 7:00 AM on a Saturday.

I grumbled, “Ehhhhch, ahhh…” which is tired-speak for “go away…I’m sleeping.” Then she chirped, “Nikki, darling! It’s Mrs. Wallabanger, and we don’t want to keep her waiting, now do we?”

Then I imagined my sweet little old neighbor sitting with an afghan around her shoulders, holding a picture of me, crying, “Why doesn’t Nikki care about me?”

So of course I dragged myself out of bed and grabbed the phone.

Before I could say, “Can I call you later because I’m half asleep…” she said, “Thanks for agreeing to rake the leaves in my yard today, dear. See you in an hour!”

I know old people eat dinner at 4:00, turn in for the night at 7:00, and then wake up before most college students even go to bed, but it should be ILLEGAL to ask anyone to do chores that early on the weekend!

Before I could say no, I heard my mom on the line, “She’ll be there. See you then!”

Even though I REALLY didn’t want to go, I figured I could finish within a couple of hours and it wouldn’t have to take up my whole day.

Then I got there and saw it: the world’s most MASSIVE pile of leaves in the world’s most GIGANTIC backyard! It was like all the leaves from every tree from all over the globe got swept up into a cyclone and then landed right behind her house.

After an hour of raking without putting much of a dent in the mess, I decided to text Chloe and Zoey to see if they could help out. Thank goodness they said yes!

We tried to make up some kind of leave raking game to make it more fun, but since we’re not five years old, we couldn’t think of anything!

About a half hour later, the funniest thing happened. Mrs. Wallabanger came out holding a tray with glasses of hot chocolate. After she put it on the picnic table, she said, “Well, would you look at that big pile. You know what piles like that are good for?”

Then she jumped right in! I kid you not…my tiny, wrinkly, crinkly, crooked-spined neighbor heaved her hunched little body into the leaves!

I don’t know why it’s so funny when old people do stuff that usually only young people do, but Chloe, Zoey, and I CRACKED UP!

After that, we all took turns jumping in and then we had a leaf fight…with Mrs. Wallabanger!

It ended up taking more than four hours to make the yard look even close to decent, but I have to admit, it was much better than babysitting a certifiably insane beast of a three year old.

But if you’re reading this, Mom, don’t get any ideas. I still HATE when you volunteer me for stuff!!

SPECIAL NOTE: Want ME hanging out in your bedroom? (Okay, not IN your bedroom, but on the walls!) Check out the awesome Dork Diaries posters available on Amazon!