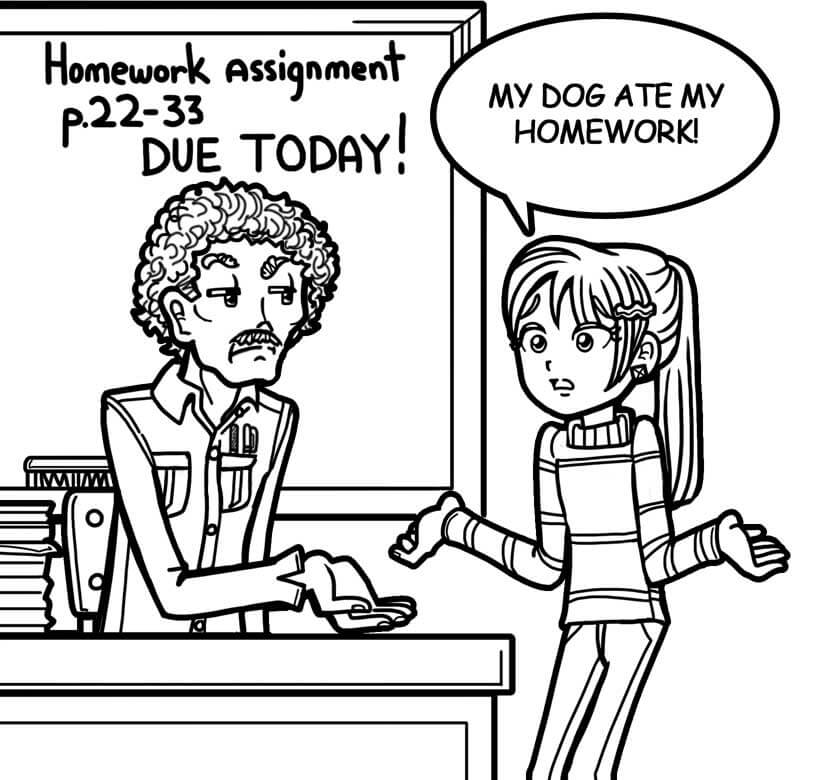 This question comes from Jodie, who writes:

I have this HUGE lying problem. When I start, I just can’t stop myself! We’re not even halfway through the school year and I’ve lied to a teacher twice because I tried to save myself from punishment.

Afterwards, I feel really guilty so I confess and apologize. Now it’s super awkward between my teacher and me. I feel a surge of panic whenever she walks by. How do I stop lying so I can stop feeling embarrassed?

Hi Jodie! I know this might seem crazy since you just admitted you lie pretty much all the time, but I think you’re kind of awesome!

Want to know why? Well, for one thing, you’ve ADMITTED that you have a lying problem. Most liars don’t do that because they’re SO used to lying that they even lie to themselves.

And as for confessing and apologizing, that’s pretty cool too!

I know some people who never confess that they lied, even when it’s SUPER obvious. (Here’s a little visual for you: Brianna. Chocolate-covered lips. Innocent face. Words coming out of her mouth: “I didn’t even LOOK at the cake!”)

So the first piece of advice I want to give you is: tell yourself you’re awesome, and know that you’re not lying about it!

As far as kicking the lying habit, it sounds like your real problem is that you’re scared of being punished.

It might help to remind yourself right before you’re about to tell a lie that the guilt you feel is actually WORSE punishment…and so is that awkward feeling after you confess.

And then when you admit that you lied (which you know you will), you’ll STILL get punished!

If this feels really hard to remember when you’re about to lie, practice saying nothing instead. It’s not the truth, but it’s better than lying!

Then, if your teacher or parent or whoever pushes you, you can say something like, “One second…I’m trying to find the right words!”

About this teacher issue, all you need to do is visit her after school and say, “I feel pretty embarrassed about lying. I guess I was just afraid I’d get in trouble, but I’ve learned a valuable lesson, and I know I won’t be lying anymore!”

Teachers LOVE to hear “valuable lesson.” You could yell BLAH BLAH BLAH in the middle of the class while the teacher’s talking, and it would probably be all good if you learned a valuable lesson!

If that seems too scary for you, then you could write the same thing in a note.

And if that seems scary too, maybe it will help to realize you are FAR from the first person to lie to get out of punishment. It’s practically in the kid handbook…we ALL do it every now and then!

What do you guys think? Do you have any advice for Jodie?