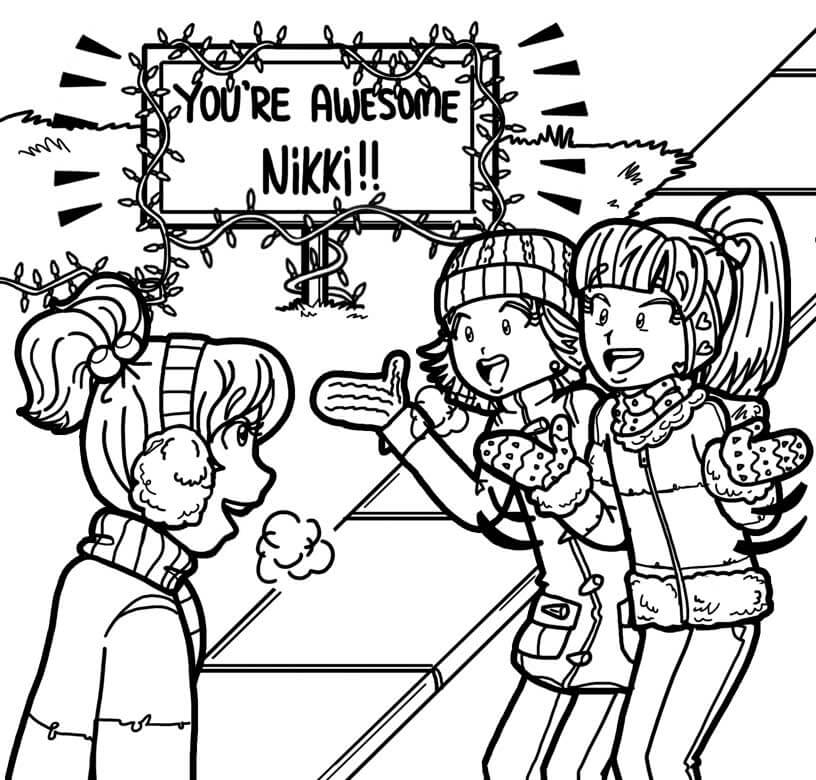 I’m the luckiest girl in the whole wide world! Why, you ask? Because I have the best friends EVER!

If you follow my Facebook page, you probably know that Chloe, Zoey, and I decided to write a list of reasons why we’re thankful for each other.

We then decided to have our own little Thanksgiving gathering this weekend so we could share those lists.

It was SO much fun!

Since our combined cooking skills include Ramen Noodles, macaroni and cheese, and peanut butter and jelly sandwiches, we had a feeling we’d mess up a whole turkey. So instead, we made turkey sandwiches (just like PB& J, but hold the PB and swap the J for turkey!).

My mom promised she’d keep Brianna busy in her room, which was awesome. (Note to self: If you need a Brianna break, use the words “extra special plans,” “friends like sisters,” and “gratitude.” Mom will get teary eyed and lock the rug rat up!)

Since we knew we’d have the kitchen all to ourselves, we decided to bake some pies while we read our lists to each other.

I told Chloe she’s an awesome listener, especially when it comes to boy problems, and she always makes me crack up when we’re working together in the library.

Then I told Zoey I appreciate that she always has some random self-help quote to help me feel better when I’m stuck in a jam, and she’s SUPER generous and smart, because I can always turn to her for homework help!

Right as I was pulling a big bag of apples out of the fridge, Zoey said, “Oh no! I can’t believe it!”

I knew apple wasn’t her favorite, but that seemed super dramatic, and totally unlike her! It made more sense when she said, “No, it’s not that. My mom just texted me. She said the dog got into my room and made a HUGE mess. I have to go check it out!”

Then Chloe said, “Maybe we should help. Let’s go!”

I was totally bummed, since I’m OBSESSED with pie, but I thought something was a little odd about their voices. They sounded like they were reciting lines in a play…badly.

Why would they plan to bail on our night, and rehearse it…but then take me with them?

And even more suspicious…why would they leave through the back door? And without even calling Zoey’s mom for a ride?

I figured it out when we got outside! There, on my back lawn, was a big white sign with the words “You’re awesome Nikki!” in Christmas lights.

How sweet is that!!

As soon as we got out there, Zoey said, “You’re such an awesome friend, like a sister! Since we’re SO grateful to have a friend like you, we wanted to make tonight extra special!”

I realized then why those words made my mom teary eyed, because I got all choked up too!

Then Chloe said, “Seriously, we’re THRILLED that you moved here and decided to go to WCD. It’s so much better with you there!”

I was so psyched about their super sweet surprise that I didn’t even mind when Brianna ran out and said, “Yay! Christmas lights! Can I help make pies with you guys??”

The rest of the night was a ton of fun, which I knew it would be. I always have a blast with Chloe and Zoey. They really are the best friends ever. THAT’S why I’m super grateful for them!!

Now it’s your turn! What’s something you appreciate about YOUR best friend?