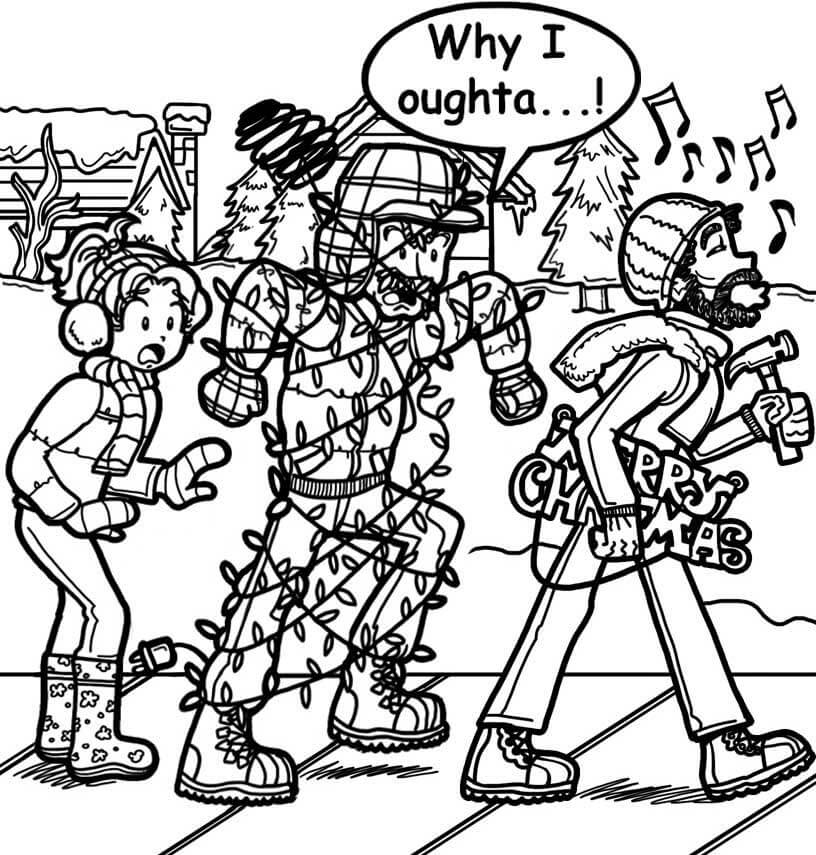 OMG, my dad is SO embarrassing!!

Every year he makes a HUGE deal of having the best Christmas lights and decorations on the block, including a MASSIVE, almost life-size nativity scene, a six-foot Frosty the Snowman that lights up, a singing Santa complete with reindeer back-up dancers, and other kooky Christmas contraptions.

And he gets super nervous any time someone walks by the house, like they’re going to grab something off the lawn and run away.

Sometimes I even hear him mumbling in his sleep, “Don’t touch my Frosty!”

Usually our house is the best, hands down! But this year there’s a new family down the block, and rumor has it they won the local Christmas decoration competition five years in a row in their old town.

Their house is INSANE! And by insane, I mean they could probably supply electricity to a small village in Africa with the money they spend powering those lights!

As for decorations…they have elves, they have gingerbread men…they even have a full size sleigh with eight reindeer that look SO real that I swear one winked at me yesterday.

If there were an Olympics for Christmas decorations, they would take the gold…and my dad is CRAZY mad about it!

Last night I was helping him add more lights to our house when we heard the beeping sound of a truck backing up down the street.

We looked up and saw two men pulling out a HUGE nativity scene that was way cooler than ours.

Then we heard our neighbor say, “Put it right there boys! Going to head down the street and put up this sign. Everyone needs to know the best nativity scene EVER is on this street!”

I looked at my dad after that to see if he was foaming at the mouth, and luckily he wasn’t. But he said, “The best nativity scene IS on this block…right here! Who does that guy think he is? I’m going to give him a piece of my mind!”

I don’t know what he was thinking! It’s not like the guy was breaking the law or anything. You can’t just walk up to a stranger and say, “Stop being a Christmas show off…or else!!”

When he starting storming down the street I got so nervous that I almost wet my pants.

I followed him, hoping I could make him see how NUTS he was being. But I knew I was more likely to grow a bright red nose and suddenly start flying than talk some sense into him!

Within a matter of seconds he was three feet behind our neighbor, who was walking away from us with the sign and a hammer in his hand.

My dad had this crazy look in his eyes, he had tangled lights around both of his arms, and he was practically running. I felt like I HAD to do something, but I’m HORRIBLE under pressure, so I yelled, “Stop Dad! He has a hammer!”

Horrible idea! Our neighbor turned around like he was about to be attacked.

He must of thought my dad was a crazy man because he said, “I have $50 in my pocket, and it’s yours!”

Even with a hammer in his hand, he was terrified!

My dad must have realized he was being a total nut job, because he only got so far as saying, “Look, buddy….”

Then he stuttered, “Your house…well, your house, it’s…you know, other people try really hard too…”

Then our neighbor said, “You’re our neighbors from down the street, right? Nice job on the decorations. I think you’re the best on the block!”

He was SO obviously lying. It would be like Selena Gomez telling me, “I heard you sing at the WCD talent show. I wish I could sing like you!”

But my dad LOVES when someone compliments the house, even if they’re lying so bad they’re pants are on fire while they’re doing it!

So he said, “You think? I added lit up candy canes this year. Yours is pretty nice too. Where’d you get that snowman?”

And just like that, he made a new friend. Our neighbor seems like a nice enough guy, but I kind of hope his family moves before next December.

My dad may have SEEMED cool with him, but he’s CRAZY when it comes to Christmas…and I can’t take another year of this!