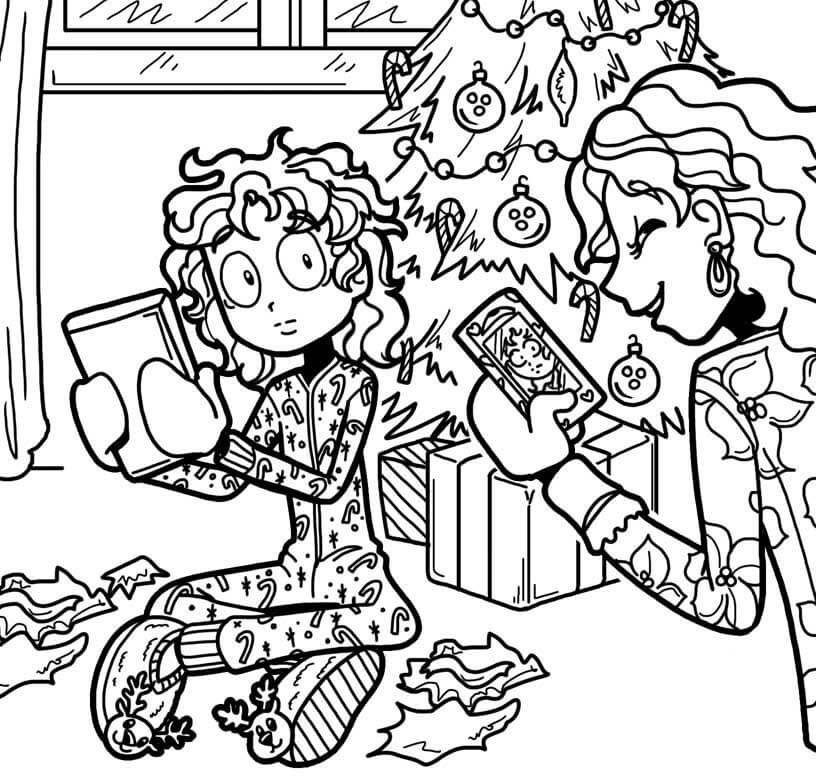 Merry day-after-Christmas everyone! I hope you all had an AWESOME holiday. I did!

I woke up to Brianna jumping on my bed, like a bunny full of pixy stix.

She was WIRED, screaming, “He came! He came!”

I usually hate when she wakes me up like this, since that means she ignored the “No Brianna Allowed” sign on my door (made with her head in a circle with a diagonal line across it).

But I don’t mind so much on Christmas. The little rug rat’s kind of cute when she’s all psyched about Santa!

And, OK, I can’t lie…I was pretty excited to see what I got, too!

I stepped into my reindeer slippers and ran down the stairs, even though I was still wearing my red footie pajamas and had CRAZY bedhead.

I’m pretty sure I looked like I’d just stuck my finger in a power outlet, but it was Christmas morning…there was no time to be vain!

Mom and Dad were still asleep, so Brianna screamed, “Out of bed, sleepy heads!!”

I said, “Shhhh! It’s SUPER early. Let’s give them a little more time!”

Then after roughly one minute and twenty seconds, I squealed, “OK, that’s enough!”

Within five minutes we were all sprawled out around the tree, tearing into the presents so fast that it was like a tornado of wrapping paper.

I got everything I wanted! If you follow me on Facebook, you know that included Just Dance for the Wii and a silver necklace with my name on it.

I thought I was finished with all my presents when I noticed one in the back of the tree.

Brianna screamed, “Hurry up and open it, Nikki!!” so I thought maybe it was from her.

But I had already opened the sad looking red and green macaroni necklace she made me (which is more likely to see a pot of boiling water and the back of my throat than the light of day!)

A part of me thought maybe it was from Brandon, since I’d overheard him talking about getting “her” a gift she’d love. (I’m a “her,” and I love lots of stuff!)

And I was right! On the top of the box there was a little note that read, “Merry Christmas, Nikki. I put a lot of thought into what to give you. I hope you like this!”

Mom, Dad, and Brianna were sitting there, staring at me, so I REALLY wanted to go upstairs to open it by myself.

I was so embarrassed that I felt like I was onstage, in a towel, with curlers in my hair and a green mud mask on my face, with hundreds of people watching me shave my legs!

I looked up and said, “Um, maybe I’ll just open this one later.”

I opened the gift with my back slightly turned from them, just to get a little bit of privacy, but I’m pretty sure they all saw my eyes well up with tears when I saw what was in there.

It was a framed picture of the two of us sitting on the floor with a bunch of puppies at the animal shelter.

But those cute little puppy faces weren’t what melted my heart…it was Brandon, looking at me, smiling and blushing, like he’s TOTALLY into me!

It was SUCH an awesome moment…and then I saw my mom standing in front of me, holding MY cell phone and taking a picture.

I asked, “Um, what are you doing with my phone?”

And she said, “When Brandon dropped this off he asked me to text him a picture of you opening it!”

OMG, I was SO embarrassed! I was wearing little girl pajamas, and my bedhead was crazy. I couldn’t believe she didn’t tell me she was going to do that! After seeing me looking like that, I thought FOR SURE he’d change his mind about liking me!

But in less than a minute Brandon texted back, “Cute picture! I hope you liked my gift. Merry Christmas Nikki :)”

How was YOUR Christmas??