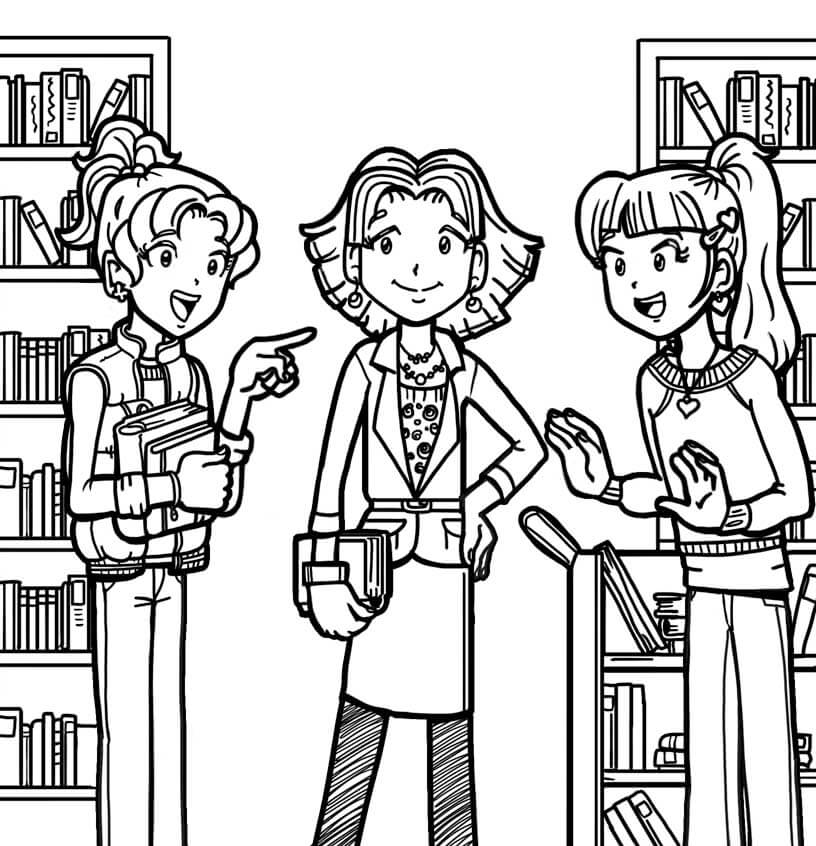 SQUEEEEE!!!! I am SO excited for Zoey that I can barely contain myself!

You know how she’s awesome at giving advice because she’s addicted to self-help books? Well she’s about to have a lot more in common with Dr. Phil. No, she’s not planning to shave her head and start talking like she’s from the south…she’s getting her own show!

Oprah came to our school and announced over the loud speaker, “ZOEYESHA FRANKLIN! Daytime TV needs a new me and I’ve decided it should be you!”

OK, so that didn’t really happen…but something almost as cool did!

It all started yesterday when we were in the library stocking shelves. Zoey was wearing a super cute outfit, so Chloe said, “Someone looks really nice today. Got a date after school today? Hmmm??”

Zoey turned redder than a glob of ketchup on a Target T-shirt, so I couldn’t help myself! I pretended I saw someone behind the bookcase and yelled, “Hi Theo! Where are you taking Zoey after school?”

(Well, I whisper-yelled. We were in the library, remember?)

Zoey turned her head so fast that I thought maybe she got whiplash! When she saw Theo wasn’t really there, we all burst out laughing.

Then she said, “Very funny, guys! I’m not dressed up for a date. It’s for something way cooler!” Then she told us the whole awesome story!

Apparently, her dad’s super close with this guy named Rick who runs our local TV station. And Rick’s been BEGGING her dad to host a show about the music industry, since he’s a record executive and he could get all kinds of cool guests.

But Zoey’s dad’s been super busy, so he had to tell Rick he couldn’t do it. He didn’t want to leave him high and dry, though. (As if low and wet would be better? What a dumb expression, huh?)

Anyways, he didn’t want to leave him hanging, so he told Rick he had an EVEN BETTER idea for a show…The Zoey Show!

It would be a half-hour show for girls, where Zoey would talk about stuff we all deal with, share advice, and even interview special guests who are doing cool things.

When I heard that I was so excited that I almost squeeeeed out loud! I knew EXACTLY who her first special guest could be…ME!

I mean, I do all kinds of cool things, like my art, and my singing, and let’s not forget my advice column. I was BORN to be on her show!

Chloe was pretty psyched too. She knows more about dating than anyone we know. She’d be PERFECT to give crush advice!

We were so excited that we kept throwing out ideas about ways we could be involved. Then I realized we were going on and on about how awesome we’d be on her show and we totally forgot it was HERS.

So I said, “Sorry Zoey! This is your thing…we’re just so excited to support you and be part of it however we can!”

And Chloe said, “Can we come to watch your first show today? Every good show needs a studio audience…that could be us!!”

Zoey smiled and said, “I would LOVE for you guys to be part of it! But today’s actually not my first show. I’m just meeting with Rick to go over the details. I hope you guys will be my first guests when the show starts next week!!”

Right then, Theo walked into the library, grabbed a book off the shelf next to us, and said, “Hi Zoey. You look really nice today.”

Awwwww! I’m so happy for her…a totally awesome opportunity AND a sweet compliment from Theo!

What topics do you think we should cover on her first show next week? And equally important, what should I wear??