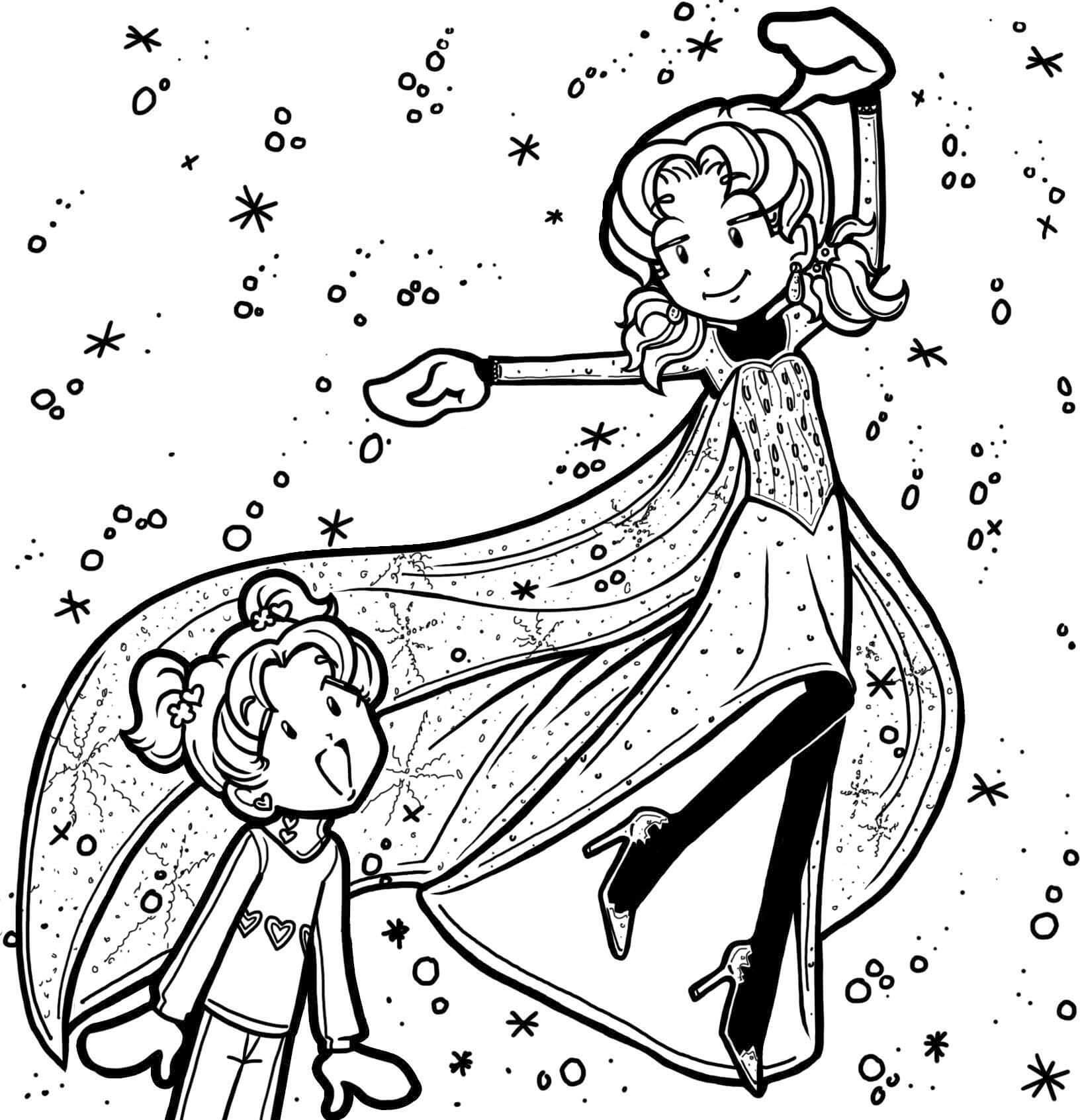 I’m SO tired of my mom trying to force me to be Brianna’s best friend!

She has her own six-year old friends, who also love Queasy Cheesy and drawing on walls, and I have my own friends, who, thankfully, never suck their thumbs or have accidents at night and then try to crawl into my bed.

Why can’t we just be sisters and leave it at that?

This Saturday, I was supposed to hang out with Chloe and Zoey (because that’s what I do pretty much every weekend). But Brianna started crying to my mom about seeing “Frozen,” even though she’s already seen it!

My mom took her the first week it came out, but she told my mom she had to go again with me because, “Nikki’s my Elsa!”

At first, I thought she meant that I’m as mean as an ice queen, but then she sang, “I never see you anymore. Come out the door. It’s like you’ve gone away.

(That’s from the movie! Sorry for the spoiler alert, if you haven’t seen it…)

After that, my mom said, “Awww! Your sister misses you. Do you really want to let her down?”

I tilted my head to think about it, as Brianna stood there staring at me with these big puppy dog eyes, but then my mom said, “That was a rhetorical question, Nikki! OF COURSE you don’t want to let her down!”

I HATE rhetorical questions from my mom. They always start with, “Do you really…” and end with something I obviously wouldn’t want, like…

“Do you really want to scar your sister for life?”

“Do you really want to make your dad feel stupid and embarrassed?”

“Do you really want your grandmother to think you hate spending time with her?”

There’s only one way to respond to these questions without looking like the worst human being in the whole wide world, so I said the only thing I could say: “Of course I don’t want to let her down!”

Then I took the little rug rat by the hand, hopped into the back of my mom’s car, and got ready for two hours of her hogging the popcorn (with sticky fingers, because she licks them between every bite!).

After my mom dropped us off, we got our tickets and got in line for snacks. We had just enough money to get a small popcorn and two small sodas.

Right when the guy finished getting our stuff and turned around to ring it up, Brianna said, “And my candy!” Then she threw this MASSIVE plastic bag filled with it onto the little scale that was on the counter.

I don’t know how she did it, but in less than 30 seconds she filled a bag with what looked like five pounds of Pick ‘N’ Mix candy. I whisper-yelled, “Put it back, Brianna! We don’t have enough money!”

But the guy at the counter said, “You can’t put that stuff back! You take it, you bought it!”

So I said, “Fine. Then we’ll have to skip the popcorn and sodas.”

We didn’t have enough money, and the guy wouldn’t let us put it back. And there was a line forming behind us, and everyone seemed totally impatient and mad.

Finally, Brianna said, “I got it!” Then she put her hand in the bag, pulled out a fistful of candy, shoved it in her mouth, and mumbled, “NOW weigh it!”

I thought for sure they were going to kick us out…until I put my hand in my coat pocket and found $20.

I had TOTALLY forgotten it was there! It was money I was planning to use for new art supplies, which I REALLY wanted. But the movie was about to start so I paid the man, grabbed our snacks, and ran into the theater with Brianna.

Even though I didn’t want to spend Saturday with her, I have to admit the movie was pretty awesome!

And even more awesome…as we were leaving, Brianna looked at me and said, “See, Nikki, you’re just like Elsa. You’re both great singers and super pretty! Thanks for buying me the candy…and for being my sister.” Then she gave me a big hug.

Okay, I admit, I was a little icy in the morning, but that kind of melted my heart!

Have you seen Frozen? Did you love it too? And who did YOU go with?