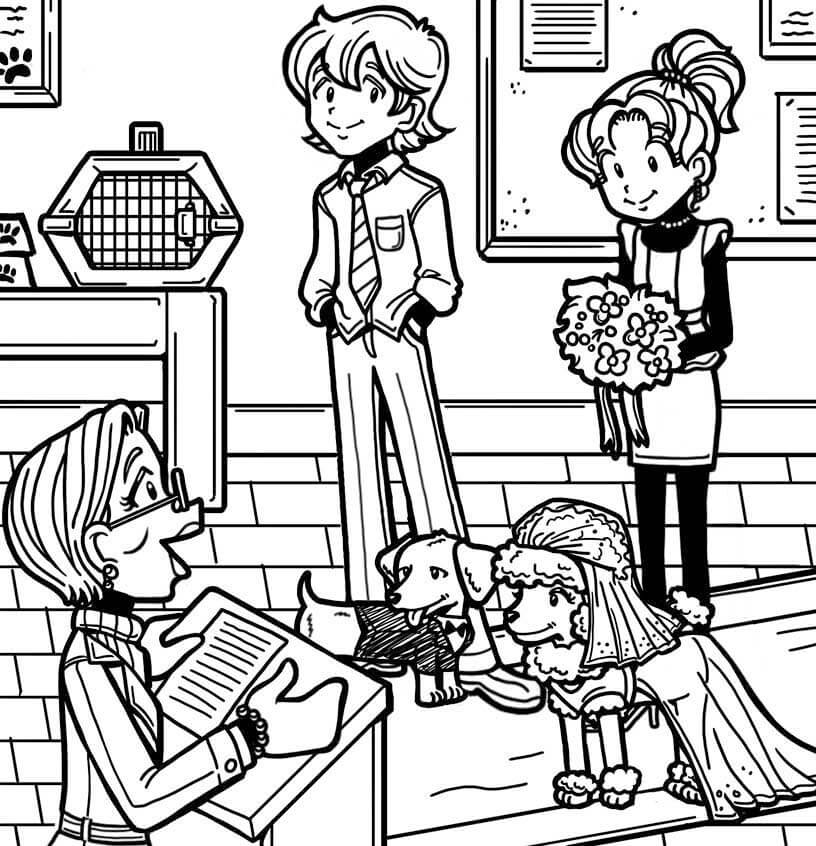 You’ll never guess what I did this weekend!

I know, that doesn’t sound all that unusual. But it wasn’t just ANY wedding. It was a wedding for Bubba and Sassy.

If those sound like odd names, it’s probably because they’re names for DOGS!

I got this idea last month when I was trying to help Brandon’s grandmother, Betty, come up with a unique idea for a fundraiser for the animal shelter.

Brandon and I were sitting with her, brainstorming, when we noticed Bubba, this cute little dachshund, cuddling with Sassy, a totally adorable poodle.

They were all nuzzled up against each other, and it was the sweetest thing!

Betty said, “Well, would you look at that! Those two are practically inseparable. There’s nothing cuter than a small dog…other than two small dogs in love!”

I said, “Aww! I wish I could take them home with me! It’s kind of a good thing no one has adopted them. They’re meant to stay together forever!”

Then it hit me: why not “make it official” and invite people in the community to come to the wedding, asking for donations to the animal shelter as gifts?

We decided that Betty would cook, I’d make decorations, and Brandon would take photos that we’d send to the local newspaper to promote the shelter even more.

It was a totally brilliant plan!

We put flyers up all over the neighborhood, Zoey announced the event on her TV show, and I even got the school newspaper to run a story about the wedding.

On the morning of the wedding, I got Sassy ready, and Brandon dressed Bubba in a little tux.

I made him do it in a separate room, though, because the groom should NEVER see the bride before the wedding!

(At least, according to the wedding forums I found online. Brides are hardcore about the rules, and kind of scary, actually. I think I’d rather be trapped with a psychotic gorilla in a boat, in shark-infested water, than left alone with an angry bride!)

Right after I finished putting Sassy in her dress, Brandon ran in and said, “Bubba has cold feet!”

In case you’re not familiar with wedding lingo, that usually means the groom wants to back out.

It seemed highly unlikely that Bubba suddenly developed a human vocabulary, or telepathically communicated to Brandon that he was too young to get tied down with a wife and a litter of puppies, so I smirked and said, “Um, really? So you speak bark now?”

Then he said, “No, I mean I spilled a bunch of ice water and he stepped in it. Can you pass me a towel?”

Fifteen minutes later, I was standing at the front of the aisle with Sassy, and then I heard it: Duh dum duh dum! Duh dum dee dum!

(No, it wasn’t a dumb kid being repetitively sarcastic…it was the wedding song!)

And after that, I saw Brandon walking Bubba down the aisle!

It was RIDICULOUSLY cute, and so romantic…until he got to the top of the aisle and Bubba peed all over Sassy’s veil!

Still, Betty saved the day by saying, “Dearly beloved, we are gathered here today to celebrate a love so deep, it can thrive through both sunshine and SHOWERS!”

Everyone laughed, and the rest of the ceremony went off without a hitch!

Awwww! I looked into his big puppy dog eyes and said, “Thanks, Brandon. I think I’m pretty lucky, too.”

It was the best weekend EVER! 🙂