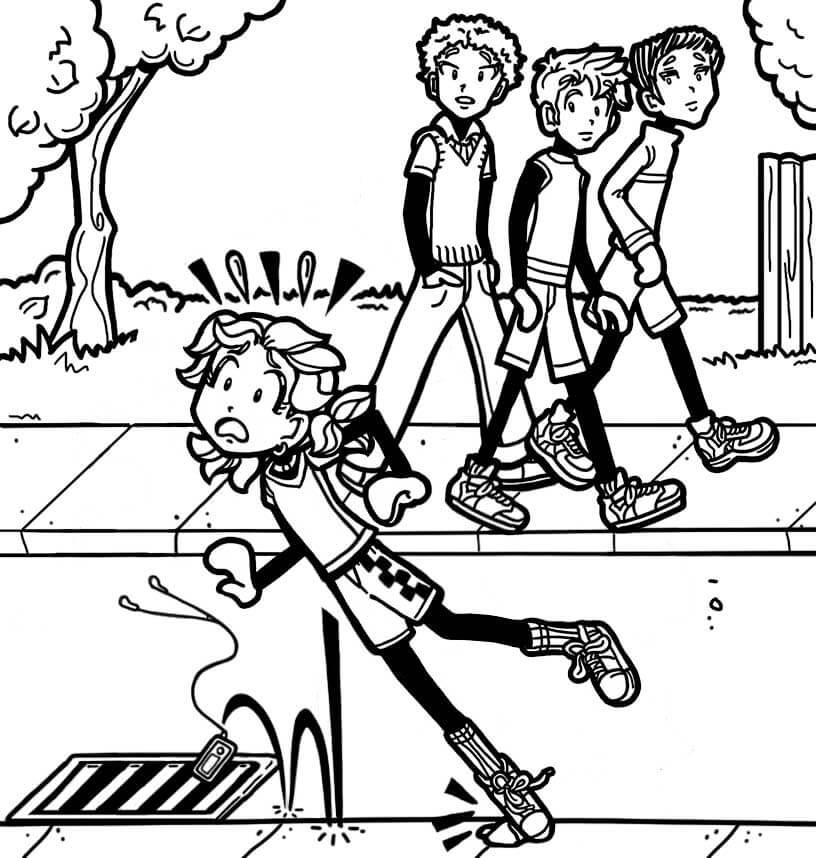 I’m starting to think my next book should be called “KLUTZ Diaries,” because I trip more than anyone I know!

This Sunday, I woke up feeling super energized. If there was a trampoline in our backyard, I probably would have spent a good hour bouncing around on it, before rearranging all the furniture in my house and doing 50 backflips!

Since we don’t have a trampoline, my mom spazzes when I move so much as a chair, and I can’t even do a good somersault, let alone a backflip, I decided to go for a run.

I NEVER run! When they ask me to run in gym, I usually say, “Why? Is someone chasing me?”

I mean, I think of running as a pretty boring and pointless thing to do. Unless there’s a hungry zombie right behind me, or I have to get somewhere super fast, there’s just no reason to do it!

But I saw this sneaker commercial that morning with some lady running with her iPod, and she looked TOTALLY happy, so I decided to give it a try!

I have to admit that I actually kind of liked it at first. I had my tunes, it was a really nice day, and I was running pretty fast. Since I usually feel as coordinated as a newborn giraffe in rollerblades, I felt kind of proud of myself!

I also liked that I spotted all kinds of cool stuff I never really noticed before, unlike when I’m walking down the street texting or in the backseat of my mom’s car playing games on my phone.

For instance, one of my neighbors has a lemon tree, and another one got a new in-ground pool. (Note to self: there’s less than a month until summer…make that neighbor your new BFF ASAP!)

Anyways, I was having a pretty good time, and it got even better when I noticed a group of super cute boys at the end of the street!

Ordinarily, I’m not some lovesick, boy-obsessed flirt, like SOME people I know (ahem, MacKenzie!). And most of the time, I don’t even notice cute boys because no one’s anywhere near as cute as Brandon!

But these boys were smiling at me…really big smiles! It was almost like THEY were flirting with ME!

Katy’s Perry’s “Roar” was blasting from my iPod, and it gave me this crazy confidence-energy combination that made me feel like the queen of the world!

So, right when I was about to run past them, I decided to speed up even faster. I figured I’d look SUPER impressive then, like a hardcore runner, and like that lady in the sneaker commercial.

And I was THIS close to looking cool and impressive…until I lost my footing, tripped, and dropped my iPod. And not only did I drop my iPod…I dropped it right down a sewer drain!

So, there I was, standing in front of all these cute boys, panting like a dog with my tongue hanging out (because I was running WAY too fast), and THIS CLOSE to crying.

One of the boys said, “Hey, are you alright? That was a pretty nasty fall!”

I figured I could redeem myself a little by saying something clever or witty. But all that came out of my mouth while I was so totally out of breath was, “Running. Not. Good. iPod. Gone. Bad.”

Then, because I was TOTALLY embarrassed, I turned around and tried to run back home. But because my side was hurting, I had to stop and walk, slowly, almost like I was limping. I was MORTIFIED!

It’s official: I am DONE with running! And I need a new iPod ASAP! Any thoughts on how I can get my mom to buy me one?