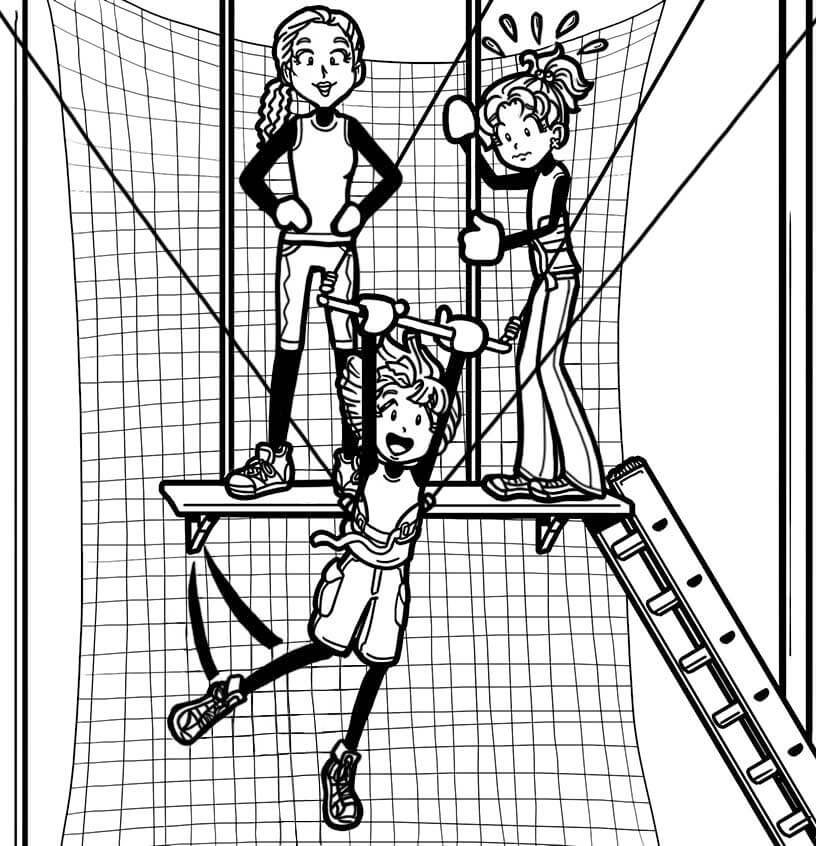 You’ll NEVER guess what I did on Sunday! It was the coolest thing EVER.

If you guessed bird watching with my dad, you’re absolutely right!

OMG, I’m so kidding. That would be way too many levels of boring and sad.

What I actually did was take a trapeze class with Chloe and Zoey!

No, there won’t be a “Dork Diaries: Tales from a Not-So-Limber Circus Star” in my future. It was just something we read about online and thought would be super fun.

I have to be honest…I was kind of terrified at first. I’m SUPER scared of heights!

Since I’m the world’s biggest klutz, I trip on the reg! And just that five-foot drop from my head’s usual level to the floor hurts worse than MacKenzie’s voice.

So why would I want to swing from the bars like a monkey when I’m afraid of falling and splattering on the ground like a watermelon tossed off a balcony?

Because it’s cool! And because I LOVE a challenge!

When we got to the place around 10:00 AM, we saw this one girl hanging from her knees from a bar, way up near the ceiling.

I just might have vomited a little in my throat when I saw that. She was SUPER high!

Then I reminded myself, “It’s just like hanging from the monkey bars at the park…” which calmed me down for all of two seconds before I thought, “…if the monkey bars were like 25 feet off the ground!”

The girl was in a harness, so I knew she was safe, AND there was a huge net underneath her. But I had a feeling my bladder would forget those things if I somehow fell, and THAT would be even more terrifying!

Chloe looked over at me and said, “Wow, this is so cool! We’re going to fly!”

Zoey said, “I wish we could do other circus stuff, too…like lion taming!” Then she started singing, “I got the eye of the tiger, a fighter, dancing through the fire. ‘Cause I am a champion and you’re gonna hear me roar!”

I could feel my skin turning all gross and clammy. Whenever I’m nervous, I become a human sponge! And my stomach was so upset that it felt like my intestines were doing their own trapeze class, swinging back and forth and all over the place.

I seriously considered saying, “I think I’ll just watch you two,” but they both seemed so excited. And I just knew if I didn’t at least try, the second I got into my mom’s car, I’d want to hurl my body around 25 feet off the ground, but it would be too late!

Twenty minutes later, we were all harnessed in, waiting for our turn to soar. Chloe went first, and she looked super graceful! Zoey did awesome, too!

I’d swear those girls were secret circus stars who had done this a million times!

When it was my turn to go, I stood on the little platform, holding the bar and staring down at the net. I wanted to let go, but I kept seeing myself falling to the ground in slow motion, like a little bird with broken wings.

I would NEVER throw a little bird with broken wings off that platform. I’m not that evil and sadistic! So why would I be so cruel to myself??

I started breathing so heavily that the instructor asked me, “Little girl, did your mom pack your inhaler?”

I’m NOT a little girl, my mom doesn’t pack my stuff, AND I don’t have asthma! But I guess she called me little because I looked like a total baby!

I took a few deep breaths and told myself, “You can do this!” And I really thought I could, until I heard, “Don’t fall, dork!”

It was MacKenzie, down on the ground! Like it wasn’t stressful enough to face this huge fear…I DEFINITELY couldn’t do it with her staring up at me, rooting for me to fail!

Dang, my mom’s calling me! I’ll write the rest of this story next week!

What do YOU think happened next??