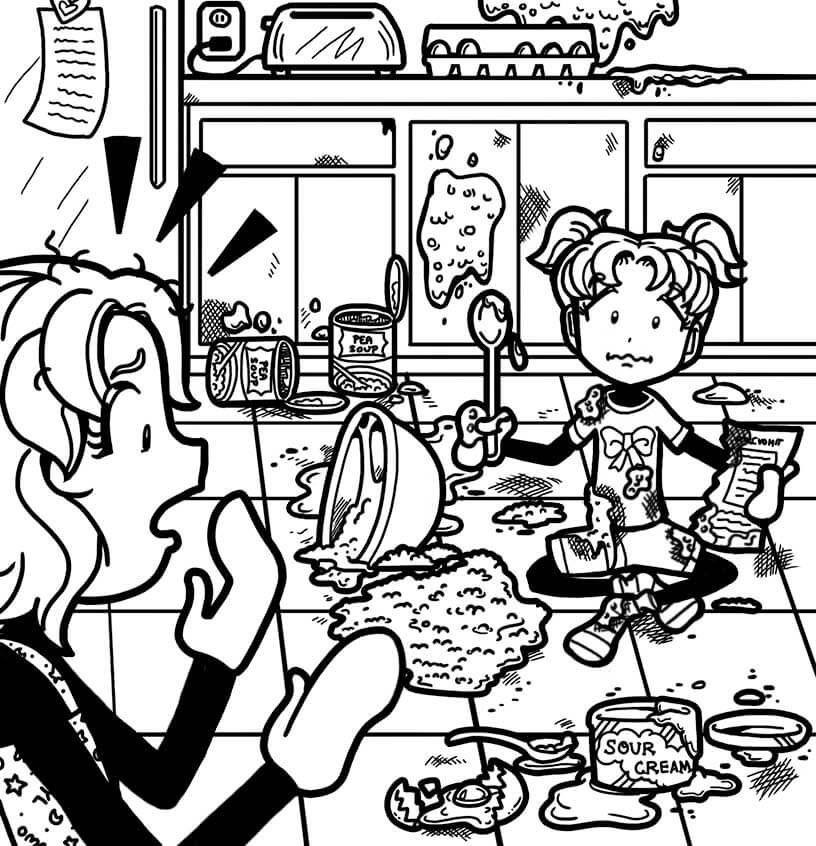 I am SO mad at Brianna! She almost got me in a TON of trouble this weekend!

On Friday night, my mom told us we were both going to her friend Jackie’s house the next day.

We were both TOTALLY bummed! I would have preferred to spend the day doing absolutely anything with Chloe and Zoey…and I mean ANYTHING!

Seriously, if they had asked me to sit in the backyard and watch mosquitos for the entire day, I would have been all over that, and NOT just because I’m THAT into bugs.

I just hate going to Jackie’s house. She has two INSANENLY annoying kids, a four-year-old and a nine-year-old, and they’re both JUST like Brianna…after a bottle of sugary soda and 50 pixie sticks!

They’re so irritating that even Brianna hates going!

Last time we were there, the four-year-old, Riley, stole Brianna’s Princess Sugar Plum doll and flushed her down the toilet.

Why, you ask? Riley was convinced Princess Sugar Plum is really a mermaid, and thought she should flush her back to the ocean. (I think she got that from “Finding Nemo”!)

Brianna TOTALLY lost it! When we got home, she screamed, “I am NEVER going back there again! Little kids are SO annoying!”

I almost laughed out loud and said, “Oh, you think?!?”

As for the nine-year-old, Aubrey, she’s obsessed with me! Every time we go over, she asks me to give her a Nikki makeover…as in, “You’re so cool and pretty! Make me look JUST like you!”

She even handed me a pair of scissors once so I could cut her hair so “we could be hair twinsies!”

On Saturday morning, I heard some noise in the kitchen before anyone got up. At first, I thought it was my dad having “first breakfast.”

(He’s practically addicted to waffles, so sometimes he wakes up before my mom and makes some for himself. Then eats HER waffles too when she gets up and pretends he didn’t already stuff his face with spongy, buttery, syrup-drenched goodness!)

But after a minute, I heard a bowl drop to the floor. And a few seconds after that, I heard the can opener, and then I heard a high-pitched scream!

I ran into the kitchen and couldn’t believe what I saw…split pea soup splattered ALL over the walls, like it was some kind of weird food art project.

And there was a broken bowl, a broken egg, and a huge dollop of sour cream on the floor.

That combination of food seemed awfully familiar, and then I realized why: those were three of the six ingredients in my fake vomit recipe!

I whisper-yelled, “What are you doing?? You’re going to wake up Mom and Dad!”

Before she had a chance to answer, someone flipped the lights on, and we turned around to see BOTH of them standing right there!

After that, it all happened so fast! Mom picked up Brianna, who was covered in pea soup, and Dad leaned down to pick up a piece of paper that was floating in the goop on the floor.

I knew right away what that paper was: a page from my diary, with my fake vomit recipe!

I had drawn a little picture next to each ingredient because I can’t go more than 15 minutes without doodling. So even though Brianna couldn’t read it all, she knew what everything was. (Why did I have to be so artistically gifted??)

I thought FOR SURE my parents were going to see “FAKE VOMIT RECIPE” in huge letters on top, so I lunged over to grab it and, of course, missed and slipped in the egg on the floor!

When Dad opened his mouth, I thought he was going to say, “We’re on to you, Nikki J. Maxwell!!”

But then he said, “Honey, why didn’t you wake us up if you were hungry? And why would you make a pea dip now?”

A PEA DIP! Apparently, the egg and sour cream had soaked through the WHOLE top of the page, and he looked quickly and assumed it was some kind of dip.

We still had to go to Jackie’s house, since Brianna couldn’t play sick, but at that point, I didn’t even care. I was SO glad my secret recipe was safe! 🙂