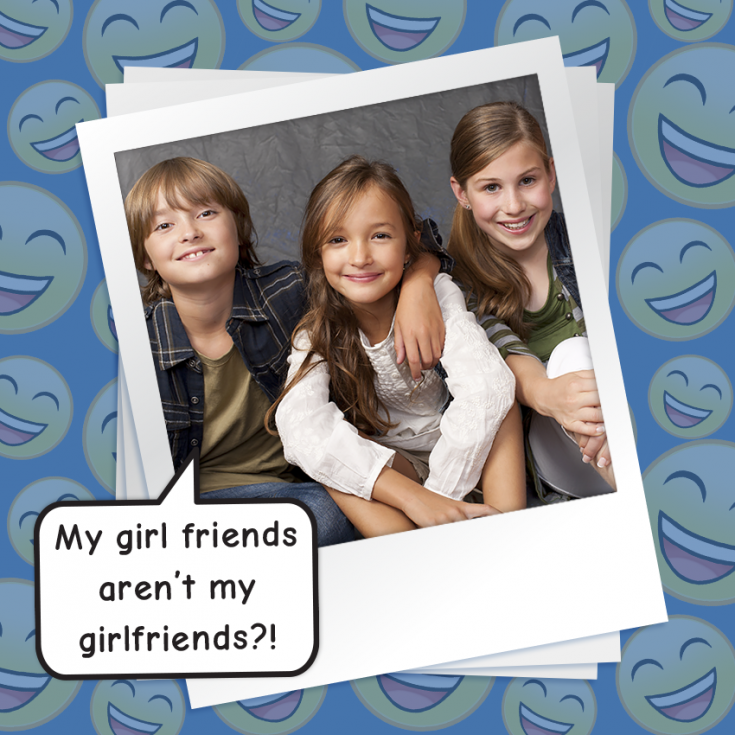 I’ve known my three best buddies since kindergarten. The problem is that two of them are girls, so whenever we’re all together classmates tease us by saying we like each other!

The truth is that we’re all just really good friends. Now, I don’t want to hang out with my girl buddies anymore and they don’t understand. They think I’m being silly but actually I’m starting to think that guys really can’t have girls as friends!

It sounds like these classmates really got to you. Friends that you’ve known since kindergarten are usually the best kind.

Since you’ve known each other for so long, you feel totally comfortable being yourself around them, and you know everything about each other. And I don’t mean just if they like pepperoni or cheese, or rap or pop music.

You know what makes them so happy that they shout “Squeeeeee” (as someone I know likes to say).

You know what they dream about being when they grow up.

You even know the stories they wouldn’t tell anyone else, like the time in first grade when they accidentally called their teacher “Mom,” or the time in third grade when they gave some old guy a hug at the zoo and realized it wasn’t their grandfather.

The only things I have from kindergarten are a ratty blanket my grandmother won’t throw away and my lucky first-day-of-school socks. (I still carry them in my backpack every first day. If I had friends from kindergarten, they’d know this!)

You’re pretty lucky to have all three of those buddies.

The way I see it, it’s only a problem that some of your friends are girls if it’s a problem for you that some kids will be weird about it.

So really, you have to ask yourself what’s worse: a few classmates thinking you have a crush on girls who are obviously pretty cool (which is why you’ve been friends for so long), or losing those cool girls from your life forever?

That might happen if you ditch them. It might hurt their feelings, and they might not be understanding if you change your mind later and want to start hanging out with them again.

I know it’s annoying to be teased, but one thing I’ve learned is that kids always find a reason to tease each other.
So, even if you tell your girl friends to take a hike, someone will tell you that you throw like a girl, or call you “meatball” because you like to eat and it shows, or ask if your five-year-old sister gave you that haircut.

If you’re going to be teased anyway, you might as well keep your friends! They’ve been there for a really long time, so odds are they’ll have your back no matter what anyone else says.