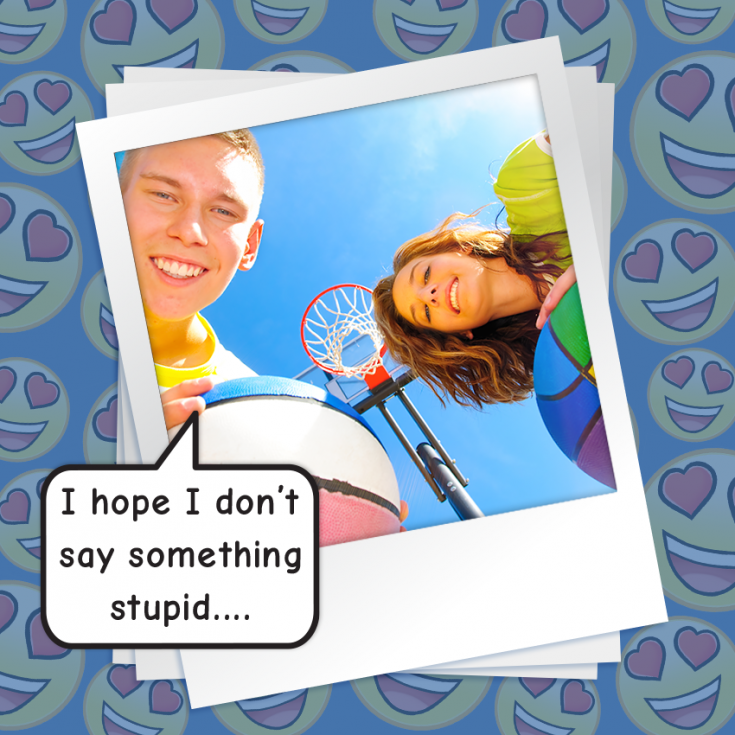 I need some advice on how to talk to a girl that I like. She’s really nice, smart, and sporty. She likes to play basketball and soccer, which are my favorite sports. Every time I try to say something to her I just sit there like an idiot! No matter how hard I try, I always make a fool out of myself. What should I say that doesn’t sound stupid?

It sounds like you really like this girl, and I can understand why, since she has a lot of great qualities.

It seems to me you only think you sound like an idiot because you like her so much.

I get that. When I first met this girl in my school that I’m really into, I thought that everything I said sounded dumb, even when it wasn’t anything important.

I’d say, “It looks like it’s going to rain today.” Then I’d think, “What am I, a meteorologist? What if it doesn’t rain? I’ll look like a total moron. Note to self: no more predicting the weather.”

I’m pretty sure that when it didn’t rain, she didn’t think, “Brandon’s such a stupid liar. I brought my umbrella for nothing.”

She probably just forgot all about it the second after I said it, because really, it didn’t matter!

If this girl is nice, as you say, it’s pretty unlikely that she’s judging your every word in her head.

And if she likes you too (which she might since you have so many things in common) she probably thinks everything you say is interesting or funny, even if it isn’t. (See my first advice column, which includes signs that a girl is into you.)

And really, the only way you could make a fool out of yourself is if you did something totally embarrassing, like serenade her with Justin Bieber’s “Baby,” while wearing a giant red velvet heart costume at her locker in front of all her friends.

So my advice to you is to take the pressure off so that you don’t seem nervous, uptight, and awkward. Pretend that you’re not Insecure in Indiana, you’re Interesting in Indiana, and that she really wants to hear what you have to say.

The easiest way to believe this is to talk about basketball and soccer, since you both like those things. When you start acting more confident, she’ll be more drawn to you, and then you’ll feel more confident.

And if you still feel intimidated by her, think about this: at some point in time, she had a crush on a guy, and she probably spent hours telling her friends embarrassing stories, like “I just wished Billy luck with his baseball game and said I hope he gets a touchdown. I’m such an idiot!”

Everyone feels nervous when they like someone. It gets easier when you relax and start being yourself.