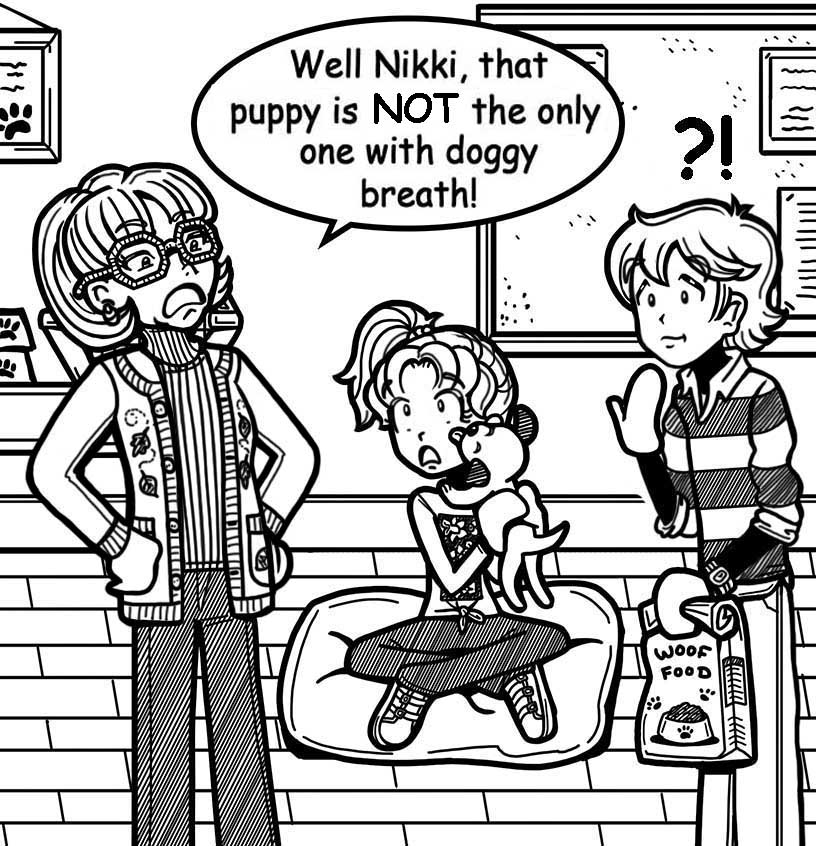 AAAAAAAAAAHHH! That was me screaming.

Why, do you ask? Because my Aunt Mabel has come to visit, and she won’t stop humiliating me!

(FYI, sitting at the kiddy table whenever I have holiday dinner at her house is NOTHING compared to what I went through this week! :()

On Monday, I invited Chloe and Zoey over after school to bake some yummy pizza. I realized we were out of mozzarella cheese, so I said, “We better run to the store and get some.”

That’s when Aunt Mabel blurted out, “Speaking of running, when Nikki was a toddler she’d run around the house all day in just her My Little Pony pull-ups and a pair of Cookie Monster socks!”

OMG, Aunt Mabel! That’s TMI (short for Too Much Information)!!

On Tuesday, Marcy and I were studying for a French test in my bedroom together when Aunt Mabel barged in and yelled, “Nikki J. Maxwell, your room is a mess! It makes a pigsty look like a bed and breakfast!”

Okay, so I’m not the neatest person in the world. But did she HAVE to bring the whole pigsty thing up? Geez!

On Wednesday, Aunt Mabel and I went to the mall. I spotted Theodore and Marcus, so I waved and shouted, “Hey Theo and Marcus! What’s up?”

Aunt Mabel just HAD to add her two-cents and said, “Is that really how you greet boys your age? Hay is for horses, and up is for elevators!”

I turned bright red. I just got ridiculed in front of my friends…again!

On Thursday, I thought I ducked her for sure so that she couldn’t say anything to make me want to change my name and move to another town. I was outdoors in the backyard writing in my diary.

Suddenly, Aunt Mabel popped her head out of the sliding door and bellowed, “There you are, missy! That French test you’ve been studying for is tomorrow, and you need to be well rested. It’s past your bedtime!”

Oh great, now all of my neighbors will think I go to bed earlier than a kindergartener! 🙁

The humiliation didn’t stop there!

On Friday, I was hanging out with Brandon at Fuzzy Friends when Mom came to pick me up, and Aunt Mabel rode along.

As we were about to leave, one of the cute little puppies jumped up and licked me in the face. So I hugged the puppy and gushed, “I just love it when these little guys give me kisses!”

Aunt Mabel said RIGHT in front of Brandon, “If you don’t mind the doggy breath! Speaking of doggy breath, I always have to remind Nikki to brush her teeth. It’s impolite to go around smelling like that whenever she speaks!”

That’s when I totally lost it and shot back, ”You know what, Aunt Mabes? Bad breath isn’t all that dogs and I have in common since I also feel like hiding under the bed whenever you’re around! Why? BECAUSE YOU KEEP ON EMBARRASSING ME!!” But I only said it in my head, so nobody heard it but me.

I love my Aunt Mabel, but I can’t take much more of this!

What do you think I should I do about my Aunt Mabel problem?