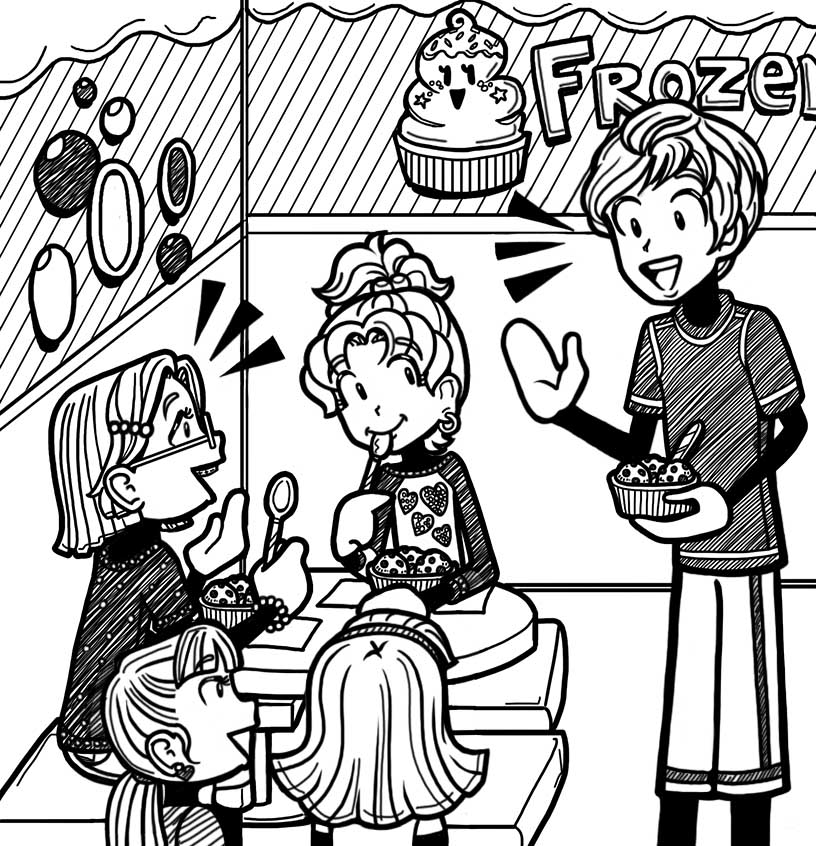 This past Thursday was the first day of school, and it was…totally uneventful.

It wasn’t super dramatic because MacKenzie was home sick. (A great start to the year!)

It didn’t involve roller coaster syndrome because I didn’t run into Brandon even once. (Huge disappointment!)

And it didn’t even involve any time in the janitor’s closet because we found there was a big fat lock on the door that wasn’t there before. (The horror!)

The highlight of my day was eating tacos at lunch, and that’s just really sad!

It’s one of those places where you can mix all kinds of flavors and then pile candy, cookies, and fruit on top. (But I never get fruit because I don’t like to waste the space in my cup with stuff my mom would approve of!)

So Chloe, Zoey, Marcy and I decided to go hang out there and check out the frozen yogurt choices.

And when I got there, I saw they had cookie dough. See, I told you it was totally exciting! The end.

Just kidding! (You knew that, right? I mean, I may be a huge dork, but my life isn’t SO pathetic and boring that I’d devote an entire post to gooey chunks of cookies!)

The exciting thing happened when we found a table and started digging into our yummy cookie dough frozen yogurt.

Marcy was telling us all about her time at summer camp.

She had a TOTAL blast! They put on a production of Alice in Wonderland and she got to play Alice. She learned how to ride a horse (so cool!). AND she won an end-of-the-summer award for being most improved in swimming.

We were ALL so excited for her! She seemed 100% more confident then she was before, and it wasn’t just because she totally kicked butt on stage and in the water.

The best part of her summer was meeting Tyler, this super cute, really sweet boy who played the Mad Hatter.

Marcy said she had a HUGE crush on him since she first saw him in orientation at the beginning of the summer. And then she was totally psyched when she found out they were going to be in the play together.

All summer they kept having these kind of dorky, yet flirty conversations.

Like, this one time, she tripped and fell right into him, then said, “I’m so sorry! I’m SUCH a klutz!”

(Get it? Because he was the Mad Hatter!)

Then this other time, she said, “It’s so hot out. I wish I could make myself a refrigerated vest!”

Then he said, “You don’t need it, though. You’re the coolest girl I’ve ever met!”

But the best thing happened on August 15th. That was Tyler’s birthday, and Marcy really wanted to give him a gift, but she was afraid that might look kind of weird, since it wasn’t like he was having a party or anything.

That day, when she saw him at lunch, he gave HER a gift! It was a rabbit’s foot keychain that he had since he was a kid that he wanted her to have for luck in the play.

When she asked what the gift was for, he said, “It’s to celebrate your very merry unbirthday!” (That’s a song from Alice in Wonderland.)

Just as she was finishing this story, she stopped talking and said, “Tyler?” He was standing RIGHT in front of us!

He lives a city over, but he was there with a few friends to check out YoSoYummy.

They both turned BRIGHT red, and it was SO cute to watch!

He said, “Marcy?!” with a huge smile on his face, and then he gave her a big bear hug. They didn’t talk for long because his friends were desperate for some cookie dough. (Can’t say I blame them…it rocks!) But he said he’d text her later.

I’m so excited for her! And Tyler’s a lucky boy to have such an awesome girl crushing on him.