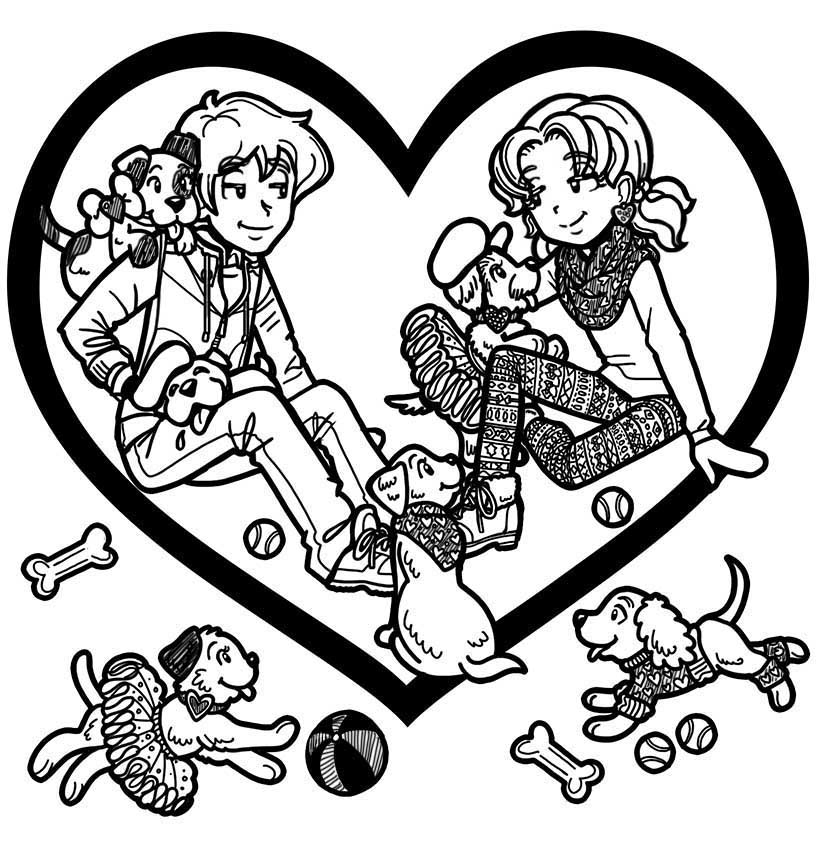 Squeeeeee!! I had SUCH an awesome Valentine’s Day!!

Chloe, Zoey, and I spent the day chilling together, baking heart-shaped cookies and cupcakes and giving each other pink manicures. (I know…we’re SUCH girls!)

Then the night was flipping AWESOME!!!

At first, I thought I was going to have to babysit Brianna because my mom and dad wanted to have a “romantic evening.”

(Which is boring-old-person speak for “dinner at Applebee’s.”)

But luckily, my mom decided at the last minute to save a little money by cooking my dad a bug-themed dinner.

I know, it sounds totally weird…and it was!

She “hired” Brianna to be their “exterminaitress,” which is an exterminator-waitress, and the three of them had a super weird, totally gross family dinner…that I, luckily, did not have to attend!

Instead, I spent the night hanging out with Brandon at the animal shelter.

His grandparents hosted a Valentine’s Day adoption party, and Brandon got to invite all his friends, so he asked Chloe, Zoey, Marcus, Theo, Marcy, and me to come.

The party started at 5:00, but I went a little early to help Brandon set up.

We made this huge banner that read, “Fall in PUPPY LOVE! Get 50% off Adoption fees, tonight only!” And I drew all these big, decorative hearts and taped pictures that Brandon took of the dogs inside them.

Then we got the animals dressed up in pink and red tutus and heart shirts. And we put these little signs around some of the dogs’ necks that read, “I woof you.”

The night was off to an awesome start, and it got even better when Brandon looked at me and said, “I got you something.”

OMG, I almost did my Snoopy happy dance right there! It was Valentine’s Day, I was chilling with Brandon, AND he got me something!

When he went into the back room, I got so super nervous that I started sweating a ton.

You’d think I was doing jumping jacks in the desert while wearing a snowsuit lined with fur. That’s how sweaty I got! My face was literally dripping.

I heard him coming back, and I panicked! I know he likes me no matter what, but I didn’t think it would be all that cute if a big, fat drop of sweat dripped right off my face and onto his hand as he was handing me my gift!

There were some napkins out next to the party food, but that was on the other side of the room, and he was literally seconds from walking in. So, I thought fast and wiped my face on the bandana Buster was wearing.

Brandon said, “I thought of you when I saw this,” and handed me a little red bag.

My eyes lit up when I saw what was inside! He is SO super thoughtful, and I was totally touched!

What do YOU think it was? And how do you think the rest of the night went?