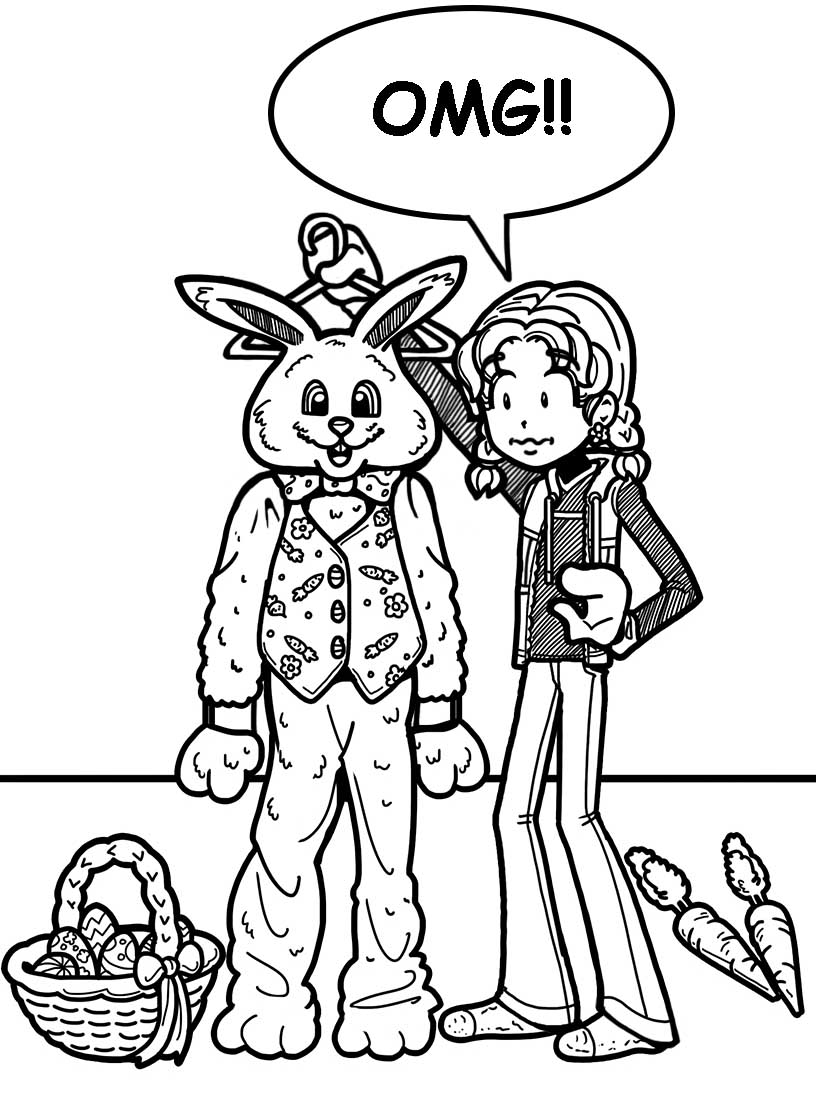 OMG! I CANNOT believe what my mom made me do this weekend!!

On Friday night she told me she was planning to spend Saturday babysitting Candy, Bambi, and Brandi Shufflebottom, these triplets from Brianna’s class. (Those poor girls, what HORRIBLE names!)

I said, “Oh, man! That stinks! I’m SO glad I’ll be at the animal shelter with Brandon!”

And she said, “Actually, about that…”

Right then, I knew that this conversation wasn’t going anywhere good!

So I said, “Wow, look at the time. I should hit the hay. Sweet dreams!”

But before I could run upstairs, close the door, and wipe the sweat off my brow in relief, she said, “I really need your help tomorrow. You’re such a good kid. I know I can count on you!”

Then I said, “Actually, you can’t! I have plans, so you’re on your own with the Shufflebottoms! Too bad, so sad, good luck, good night!”

But I said it in my head so nobody heard it but me!

What I REALLY said was, “Gee, Mom, I’d love to help you out, but I’ve really been looking forward to meeting Brandon at the animal shelter. We’re going to dye Easter eggs together and everything.”

She responded, “Invite him over here! We’ll be dying Easter eggs too, so it will be a big, fun party!”

All of a sudden I imagined Brandon standing in my kitchen, with yolk running down his head, while Candy launched eggs like cannon balls, Bambi hung on his back screaming, “Move, horsey!” and Brandi and Brianna pulled on his arms, like he was the rope in a tug of war.

So I said, “Gee, Mom, that sure does sound like a hoot. But I think I’ll stick with my original plan if that’s okay with you. Maybe Dad can help you out.”

And that’s when she said it…the thing that, after she said it, I couldn’t possibly say no: “Actually, your father’s going to the hospital tomorrow. Our good friend from college is really sick. I’ve been very worried about her. I’m going to head over right after the triplets go home.”

I couldn’t leave her all by herself with a zoo of six-year-olds when I knew she was super bummed about her friend!

I originally thought I’d just cancel my plans with Brandon to spare him the trauma of dying eggs with a houseful of rambunctious rug rats. But when I told him my mom suggested I invite him, he said, “I’d love to join! That was really thoughtful of her!”

I could have thought of a lot of words to describe my mom’s invitation to hang out with a bunch of bratty kids, but “thoughtful” wasn’t one of them!

I tried to be positive when I woke up in the morning. I told myself, “Well, at least Brandon will be here to keep me company. Maybe it won’t be that bad!”

That’s when I saw it: an Easter Bunny costume hanging on my closet door. I ran downstairs and yelled, “Mom!!! What’s this hanging in my room!?”

She said, “Good morning, sunshine! I hope you don’t mind wearing that for a little bit. I just know the kids would be tickled!”

I looked at the clock and saw it was 10:00AM. The Shufflebottoms would be over within a half hour, and Brandon shortly after that.

I was MORTIFIED!!! I tried to convince my mom that the kids shouldn’t see the Easter Bunny the day before Easter because it’s bad luck, but she said, “It’s not like you’re a bride on your wedding day! You kids…I don’t know where you come up with this stuff.”

Then I said, “You know what? I think the Easter Bunny is actually a lot taller than me. I know…YOU should wear the costume!”

Then she said, “And you know how tall the Easter Bunny is because…? You’re too much! The costume doesn’t fit me, unfortunately. Don’t worry, you’ll do fine!”

She really thought THAT’S what I was worried about…that I’m not a good enough actress and I’d get bad reviews from a bunch of kids!

Before I knew it, I was wearing that itchy costume and I heard the doorbell ring.

Oh crud, I have to wrap this up and get started on my homework. I’ll finish the rest next week!!