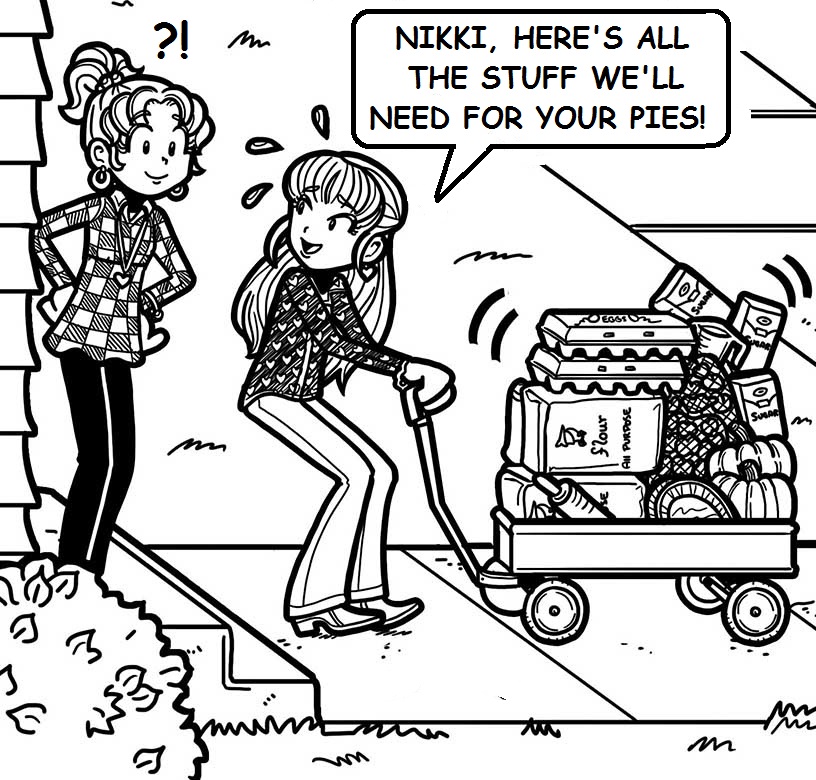 That was not my impression of an angry pirate. It was me wondering WHY MY PARENTS DON’T GET ME AT ALL!!!!!!

I was not being “rude” or “ungrateful” when I made a simple suggestion at dinner. Mom was talking about everything she needs to buy for Thanksgiving and I made the (very helpful!) suggestion that maybe Grandma Maxwell shouldn’t be in charge of bringing the pies this year.

I mean, COME ON! Last year she didn’t have any cinnamon for her pumpkin pie, so she used chili powder instead!!! I am still traumatized!!!!

But then my mom snapped, “And WHO is supposed to make the pies, Nikki? Me?? I already have to make the turkey and stuffing and potatoes and green beans and…”

Look, I know my mom has a lot on her plate! Thankfully I had another super helpful suggestion ready! I’ve been seeing commercials for weeks that Pie’s the Limit is having a special of 3 take-and-bake pies for only $49.99!!! I even knew which three we should get!!

But that got my mom off on a rant about how money doesn’t grow on trees, and then Brianna started hollering about how cake is better than pie, and FINALLY, my dad interrupted everyone to say he had a simple solution.

Let me just tell you right now that his solution was not as simple as MINE.

My dad said I should be in charge of making the pies!! That I am old enough to take some responsibility! And I had to give him a list by the morning of whatever supplies I need!

Ugh!! So I went to research pie making options and got super overwhelmed and then Chloe called. She was SO EXCITED when I told her my problems. Apparently her family’s Thanksgiving was suddenly cancelled because her Uncle Carlos has a mysterious illness and can only eat celery and chicken broth for the next week, and no one wants to make him feel bad by devouring a big meal in front of him.

I guess Chloe had big pie plans for her family, so she’s heading over here today with all the supplies. Then tomorrow, we’re going to make the pies together! I called Zoey to see if she could come too, but she has a family thing.

Will YOU be helping to cook a special dish for Thanksgiving or the upcoming holiday?

What is YOUR most  favorite Thanksgiving/holiday food to eat ?

Tell me all about it below?