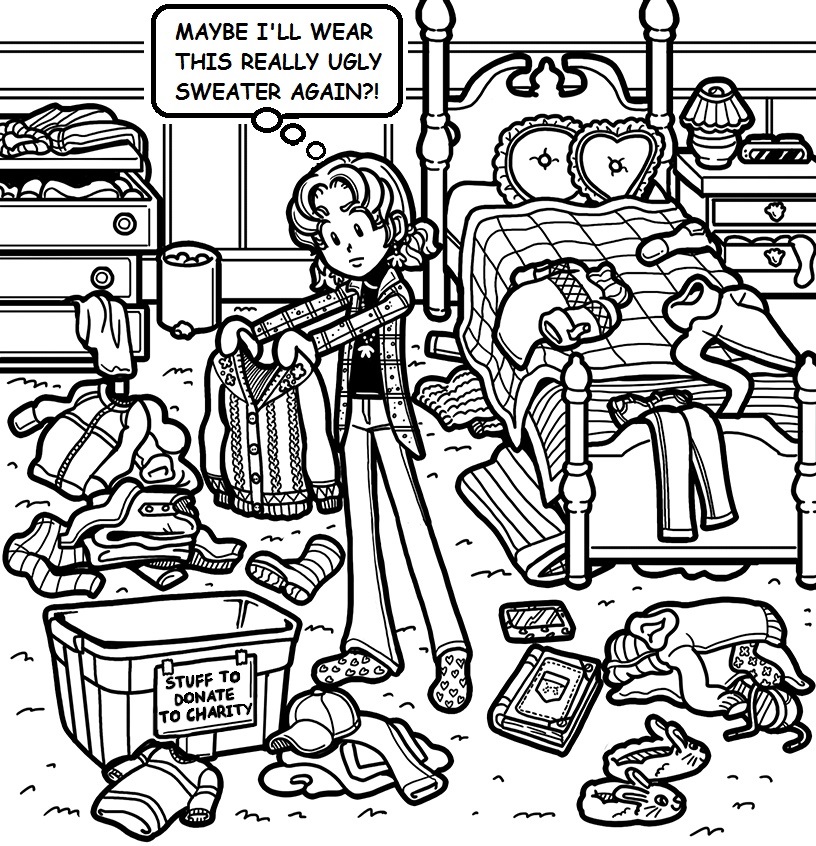 I have AMAZING news and I have HORRIBLE news. First, Chloe invited me and Zoey to sleep over on New Year’s Eve and that is OBVIOUSLY the amazing news. BUT, my mother just totally lost it over how we have TOO MUCH STUFF and now there is EVEN MORE STUFF after Christmas presents and she CAN’T LIVE LIKE THIS!!!!

I mean, if she didn’t want us to have so much stuff, maybe she shouldn’t have given us so many presents. It’s not that I wish she hadn’t. I’m just sayin.’

I mean, I get it. She’s not wrong. We DO have a lot of stuff. But, like, it’s kind of CRUEL to be all, Merry Christmas! Now, GO CLEAN YOUR ROOM!!

Anyway, she gave me this GIANT bin and said I have to fill it with stuff to get rid of before I’m allowed to go to Chloe’s sleepover!!

I started with my clothes, because—well, mostly because they were everywhere I looked. All over the floor, under my bed, hanging over my desk lamp (don’t ask). I DO have a lot of clothes. Probably way more than I need. It shouldn’t be that hard to get rid of some.

But the first thing I picked up was the skirt I wore when Brandon and I shared a cupcake at the CupCakery. I mean, okay, the waist is a little tight. But I wore it while hanging out with Brandon and almost-kissing!!! I probably should keep it.  I could be buried in it when I die!!

I decided that any clothes on the floor were clothes I had worn recently (or sort of recently, considering how stiff and gross those gym socks were—EWWWW!) and therefore I shouldn’t get rid of them, so I hauled them to the laundry room. Then I dug further back into my closet to find some things I haven’t worn for ages.

Bingo! My neon orange jog-a-thon t-shirt from elementary school! I dunked it into the giveaway bin like I was making a championship-winning basket. Then I stared down at the still mostly-empty bin. I needed bulkier things to fill it up!

I hit the jackpot when I found the crutches I used during Holiday on Ice rehearsals. Technically, they’re my dad’s, but hey! They were in MY closet all this time! Into the bin!

Then I found some suuuper uncomfortable shoes I hate and tossed them in. This was getting easier! Only…then I remembered I wore those shoes when I first went to talk to Brandon about working for the WCD newspaper. I thought they made me look journalistic. And they MUST have! Because I totally got the job, which has provided a lot of bonding opportunities with Brandon.

So…I pulled the uncomfortable shoes out of the bin.

Getting rid of clothes wasn’t going very well. I mean, what if I got rid of something, and then one day when we’re old and gray and talking to our grandkids, Brandon says, “Oh Nikki, remember the time we first hung out on a Wednesday in March and you were wearing that super ugly green sweater? It was the first time I knew I loved you. Where is that sweater?” Am I supposed to tell him – in front of our GRANDKIDS – that I tossed that sweater away like it was GARBAGE??

I dug through the closet for some more stuff – more clothes I’ve worn in front of Brandon, or on the phone with Brandon, or while thinking about Brandon; art supplies, which are obviously staying; boxes of filled up diaries—definite keepers. I even found and decided to keep this weird sculpture Brianna gave me last Christmas, made out of toilet paper rolls, gum wrappers, and cotton balls. I have no idea what it is. But she IS my sister, and as BONKERS as she makes me, I love that weirdo.

And THEN! Jackpot! My hand landed on something plasticky. I tugged until it finally came free from the box with my first grade collection of My Precious Ponys. (Can’t get rid of those, because they’re so lame they’re almost cool again.) It was the inflatable rocket ship I begged for when I went through a brief third grade space obsession. With no air in it, it didn’t look like much.

But SOMETIMES I’m so smart I amaze even myself. It took a LOT of huffing and puffing, but within a few minutes, I had that baby inflated. It was so big, I actually had to take the crutches out of the bin to make the rocket fit inside. VOILA!!!

I hauled the bin out of my room and through the living room, acting like it was WAY heavier than it was. “All done, Mom,” I said.

I shrugged. “It’s full. I’ll just put it in Dad’s van so he can drop it off at the thrift store.”
She beamed at me. “Doesn’t it feel good to help others?”

It does! I’m sure that jog-a-thon t-shirt and inflatable rocket ship are going to make someone VERY happy!! Just like I’M very happy to be going to Chloe’s for a New Year’s Eve sleepover!!! SQUEEEE!!!!!!