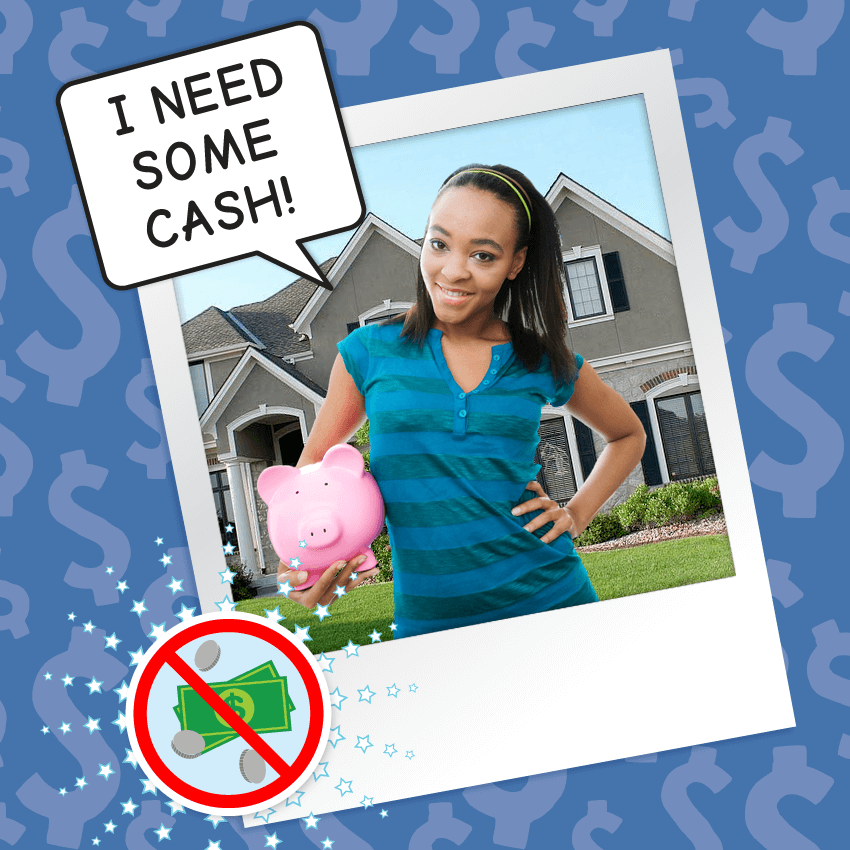 I can’t seem to get my parents to give me an allowance. At my school, everyone has an allowance and it seems to me that I’m the only one who doesn’t have one. Please help!

Isn’t it the worst when you think you’re the only one who doesn’t have something? Whether it’s a cell phone, a social media account, or the latest video game… I totally get it.

But first of all, you’re probably not the only one. Unless you go to a tiny school with only ten other kids in your grade and you’ve asked them all personally whether on not they get an allowance, chances are that you’re not the only one who’s penniless. Most people don’t go around announcing what they don’t have.

But, whether you’re the only one or not, the fact is, you want an allowance. You want to have some money of your own so you can decide what to spend it on. That’s fair. Even if your parents supply you with everything you could possibly need, sometimes a kid wants to be able to grab a candy bar, a magazine, or that supercool new zoom lens on the cover of Photography Journal. (Okay, that last one might just be for photography addicts like me.)

Because I don’t know your parents’ reasons, it’s hard to know what to suggest. If money’s tight around your house, your parents might not have anything to spare. It’s stressful being an adult, from what I’ve observed. So if that’s the case, I’d suggest you try super hard to be grateful for what they do give you (like food, clothes, a roof over your head) and try to find some other ways to make some cash. Are you old enough to babysit? Could you mow lawns or walk dogs or do chores for an elderly neighbor?

If your parents have the funds but are holding out on you, it might be because they don’t believe in giving kids an allowance just for being kids. I mean, your parents probably have to work for the money they have. I know my grandparents work incredibly hard keeping Fuzzy Friends open. Maybe you can propose taking on additional chores to earn some money. Maybe you could propose a system where you save and donate a portion for every dollar you earn, rather than spending it all on whatever you want.

Try to approach the conversation without whining or making statements that include the phrase “everyone else.” (Even if it’s true!!) Show your parents how responsible and thoughtful you can be. If they won’t budge, ask when they might consider giving you an allowance and if there’s anything you could do to show them how responsible you would be.

If all that doesn’t work…I guess you just have to hang in there. It won’t last forever. Focus on what you’ve got—friends, books, access to the internet—and trust that in time you’ll get that supercool zoom lens. I mean, you’ll get an allowance!

Is there anyone else who doesn’t get an allowance? Or, is there something else your parents won’t let you have that you’re convinced EVERYONE ELSE has? Tell us in the comments!